Motherhood is a special journey, whether you’re a human or a dog. It’s also a period of adjustment, particularly if you’re a first-time mom. But all in all, it’s a wonderful thing. And one young golden retriever named Yami seems to be learning the ropes of motherhood as she cares for her newborn puppies.

Her owner managed to film a very tender moment between the new mom and her babies as she tries to comfort them. The new mom does the only thing that she can think of, she brings them her favorite toys as a way of letting them know that things will be okay and there’s no need to cry. It’s just too precious – your heartstrings will be pulled.

The sweet mom and her three puppies live in Zhengzhou, China, which is where the video was filmed. 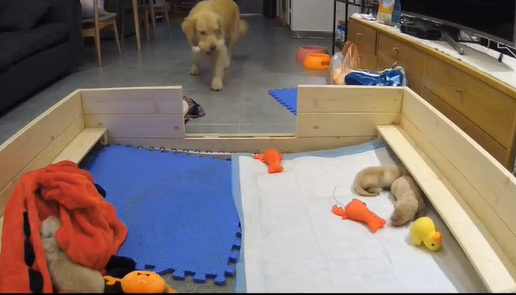 But initially, the toys weren’t making much of a difference. The little pups were still crying and it was clear that Yami was starting to get impatient. She wasn’t quite sure what to do, so she kept bringing toys. As her owner explained to the DailyMail, it wasn’t until she sat down with them and cuddled them with the toys that they started to eventually settle.

Her owner had previous posted the video of Yami and her puppies on a Chinese app, Douyin. Douyin is the Chinese version of TikTok. It quickly went viral on the site, and as its popularity started to grow it eventually began to make the shift to other social media platforms.

Many people were touched by the mother’s actions, with one person commenting that it made them cry. Another comment mentioned that they could relate to the feeling of helplessness as a first time mom. The video certainly had many people who were able to connect to the raw emotions in it. And I think we can all agree, it’s a very touching thing to watch.

Check out the touching footage in the clip below: