A dog that suffered from horrible chemical wounds has found a forever home!

“It was one year ago today, that we received a phone call about a bloody stray dog at an abandoned house in Shelby County. That is where our journey started with the Pit Bull Terrier we fondly named Justice because we wanted justice for Justice. On November 5th, through an anonymous tip, we knew who owned Justice and that they referred to him as Roscoe. The torture this dog endured and then driving him from Marion County to Shelby and dumping him like trash is unforgivable and inexcusable. We will not give up nor stop until there is an arrest and conviction. 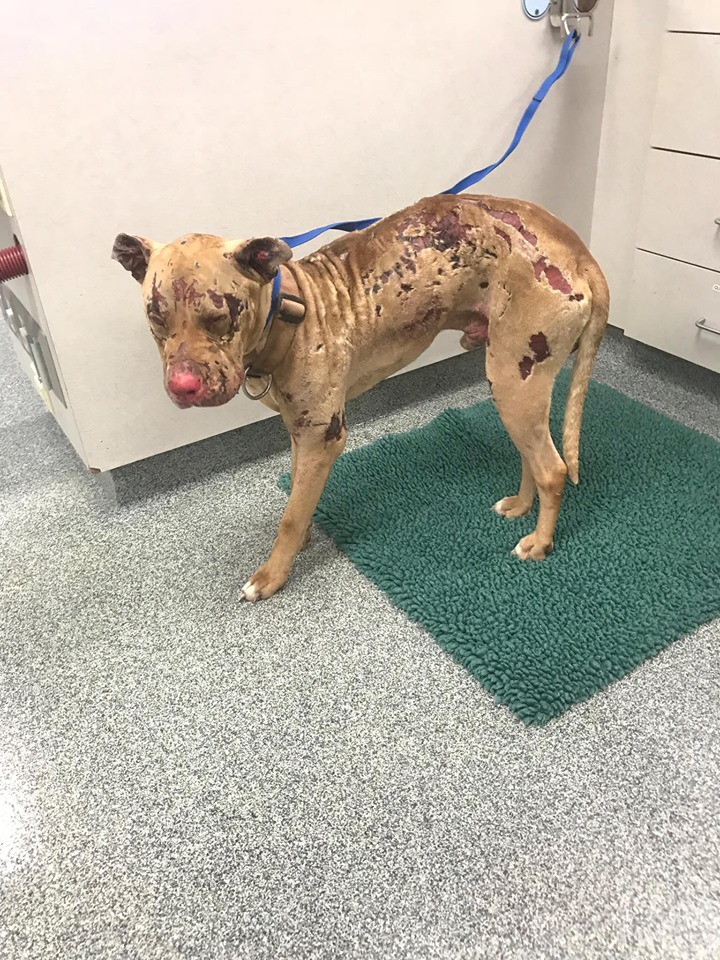 These pictures represent his healing process. The lows, the highs, the happiness and love. If you haven’t seen Michael Roppolo’s video from CBS News, please click on the link. It is quite powerful.

When we arrived with Justice, IndyVet told us that they could fix him but it would take time and money. We didn’t worry and put our faith in God. We said our goodbyes as they quickly administered pain meds to our fighter and took him off. It was a long drive back to Shelbyville, but we knew it was the right decision. I also remember that Keith’s Jeep still had a strong chemical odor that burned our eyes, nose and throat. How Justice survived is a miracle. But we believe in miracles, don’t we? He is living proof. We were shocked by the outpouring of love, prayers, and donations. Locally, and around the world we received emails, phone calls, care packages and cards. 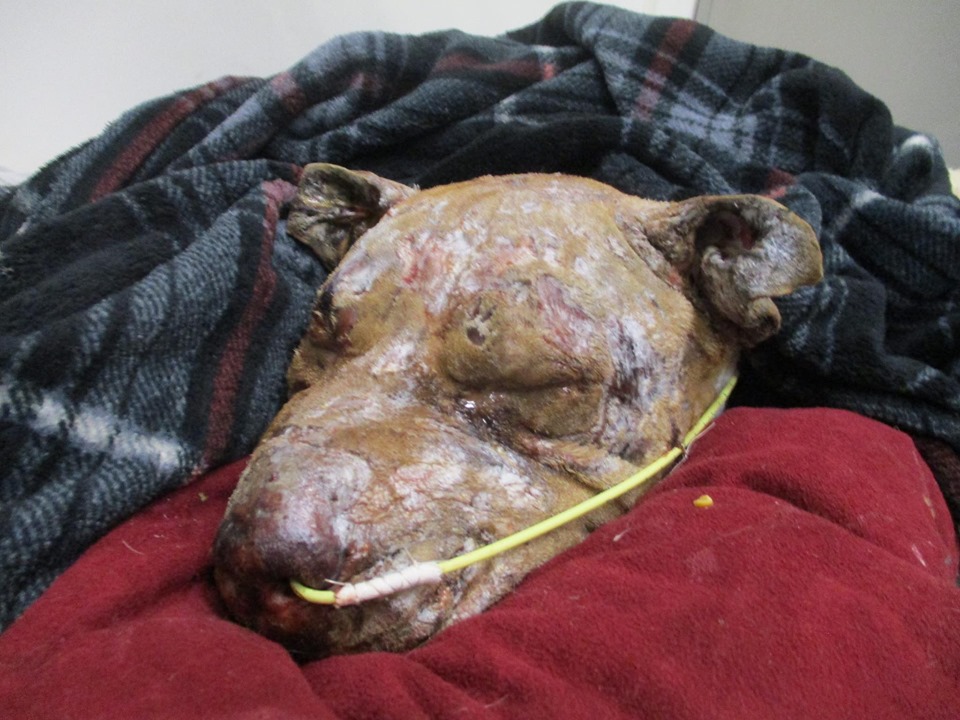 Justice needed a feeding tube so he could get nutrients, his face was swollen but we knew he was comfortable. Then he had sepsis, pneumonia followed. What more can he endure? While at IndyVet, we weren’t surprised when Justice tested positive for heartworm. If the monsters who owned him treated him like this, of course they aren’t going to keep him current on heartworm preventative. Through tips I also learned he lived a life chained up outside or in a cage in their garage. It amazes us how social this beauty is considering how he was treated.

Justice continued to persevere, had an army of caring staff at IndyVet there to help him. His care packages were delivered to him and his foster Vet Techs, Jarrika and Jessica both took him into their homes and hearts. They cared for him, treated him and loved him like he was their own. 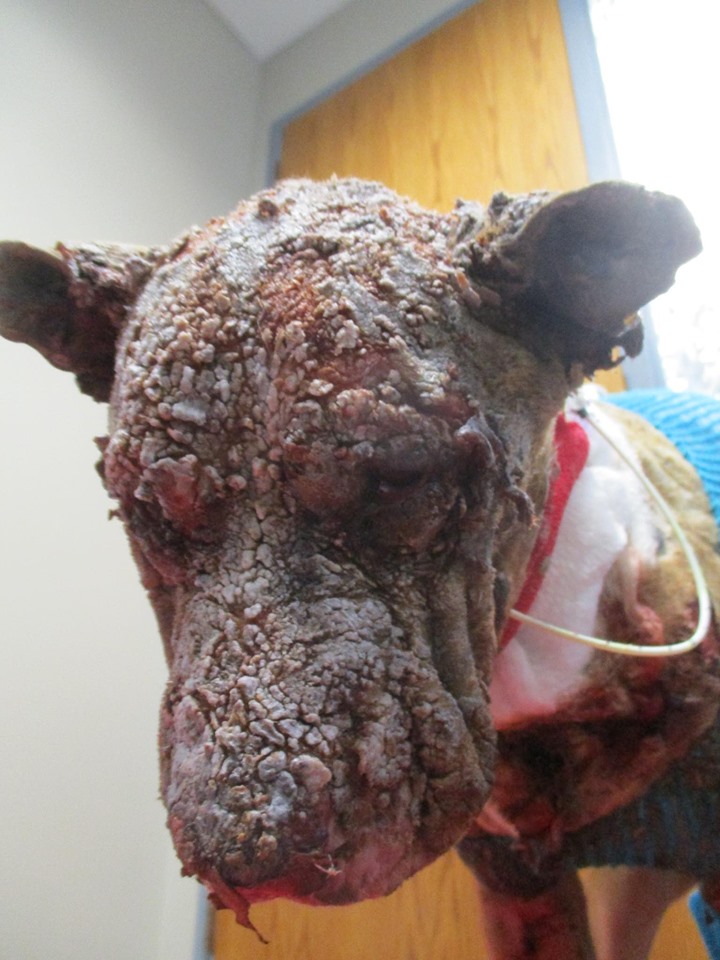 Along came foster family number three. We will refer to them as foster failures! They love him, he is at home with them and we do not have to worry about his care or exploiting him. One day soon, the adoption will be finalized.

Justice continues to gain weight, his left eye is looking better and it hasn’t been determined if a second surgery will follow. He meets with a trainer and enjoys donut holes, filet mignon cooked medium (on the grill of course) and nilla wafers! He goes on car rides and loves to be between his mom and dad! Life is good. God is good. 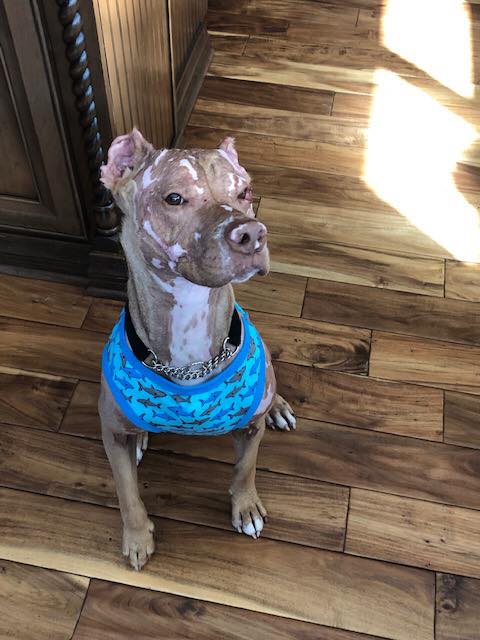 For now, the reward is $15,000 for the arrest and conviction of the cowards but there will be an announcement in two or so weeks about the reward and other information.

One day there will also be a homecoming for our hero and we want everyone to come, meet him and see how our prayers have been answered. Maybe Spring of 2020?

To everyone who has followed him, prayed for him, donated and cares as much as we do. Thank you. God bless you. It’s been a year like no other but look at him now. Justice, you got this.