People can be downright cruel towards animals and it is such a sad thing to see. One man living in Oklahoma City, Oklahoma, couldn’t believe what he was seeing the day he saw a stray dog wandering about with a giant chain locked onto her neck.

The man, Robert Rojas, had spotted the poor dog on the street carrying a very heavy padlock and chain around her neck. He immediately knew he had to help and cautiously approached the dog. Luckily, the dog was quite a friendly pooch, despite the horrific situation. The poor girl was carrying a very heavy burden – 30 pounds of it!

Because of this situation, change is starting to come about. In Oklahoma, there aren’t any current laws regarding how dogs are chained up. Inspired by this poor pooch’s experience, Democratic state representative Mickey Dollens decided to draft a bill that would make this sort of cruelty a criminal offense. Dollens told KFOR that he was approached by Rojas about the incident. He then began to look into the laws and was extremely shocked and horrified by how few laws there are in Oklahoma regarding animal cruelty. 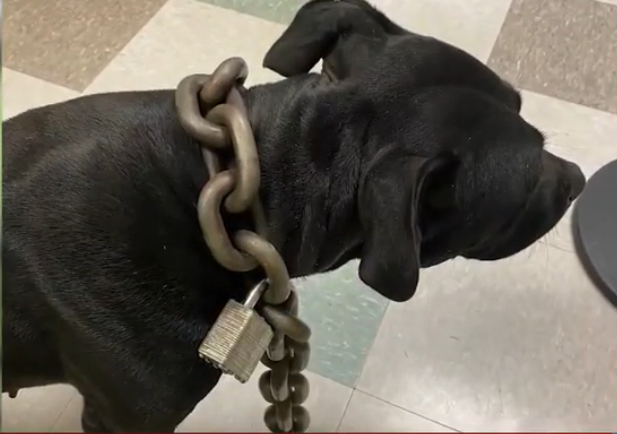 Dollens stated, “Never chain your dog, especially to a tree fence or pickup truck. The likelihood that they die from suffocation is increased and it’s just no way to treat a pet.”

Dollens added that he was imploring the people of Oklahoma to treat their animals with love and respect – the way that all animals deserve to be treated. It’s good to see lawmakers wanting to make a change for the better so that animals can have the same love and respect they deserve.