A Kidnapper Dragged Her By Her Hair Into The Woods. How This K-9 Officer Saved Her? Incredible!

The Rancho Cucamonga Police Department is praising one of their own after one of their beloved canine officers thwarted a kidnapping. Deja showed off her sleuthing skills after officers received notice that a 16-year-old girl had been kidnapped and dragged by her hair into the woods. She was taken from her home around 3.a.m. by an 18-year-old man, who was later identified as her boyfriend.

In the middle of the night, Deja jumped into action and led her handler into some nearby woods. The four-legged detective led officers to the lost girl’s purse and drag marks. She then followed the scent to the front door of a home in the middle of the woods. After alerting officer that something was inside, the kidnapped girl and her captor were found hiding inside. 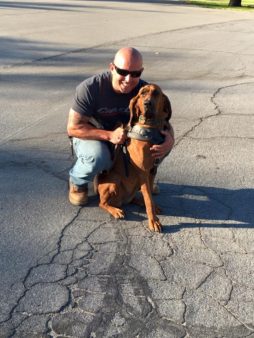 Thanks to Deja’s hard work and dedication to her job, the man was arrested for kidnapping and the girl was returned to her family. The incredible story has quickly went viral and Deja and her handler have been interviewed by many media outlets. Deputy Josh Stone says it wouldn’t be possible without exceptional teamwork.