Dogs bring us such joy. The best thing about them is they are always willing to play with us. We’ve probably all enjoyed a game of hide-and-seek with our dogs at one point or another. And one dog owner, Shane McRae, managed to film the entire playtime while at home in Irvine, California with his Golden Retriever, Moose.

McRae was in the bathroom trying to hide from the 10-month-old pup. He was filming from the hiding spot, which had a giant mirror behind him. While McRae was busy capturing Moose’s search for him, another person was cheering on Moose to find McRae.

The clever pooch ended up finding McShane after spotting his reflection in the mirror – probably should’ve thought about covering the mirror while hiding. But the most hilarious part of the video was after Moose found McRae. The pup didn’t realize the owner was actually standing behind him and he was just looking at a mirror reflection.

He stands there, confused for a moment, until he finally figures out the optical illusion. It is just too cute to watch.

But that’s not the only time we’ve seen dogs make us laugh. Not long ago, we were graced with the hilarious Maggie, a Shihtzu-Poodle-Chihuahua mix who stole a pair of false teeth! 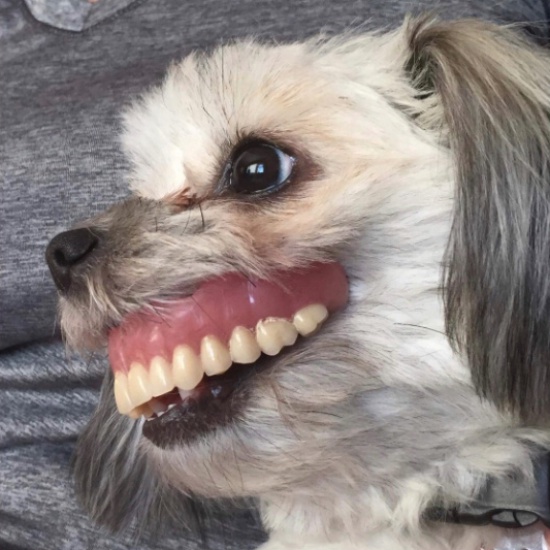 While she was carrying them around, she inadvertently made it look like she had human teeth. The entire scene was too funny not to capture on camera.

Everyone was floored by the hilariousness of the moment. Apparently, little Maggie enjoys carrying things around in her mouth and the dentures was the perfect item to lend to a hilarious photo. Dogs are too funny!