It’s not every day that you get to meet your hero, let alone bump into them on the street. But one rescue dog did just that and completely freaked out when he saw Chewbacca.

Recently, a group of people were dressed in costumes at the University of Azuay, in Ecuador, for an upcoming Halloween party. Among the people wandering the street was a man dressed as the legendary Wookiee warrior and Han Solo’s co-pilot from Star Wars. 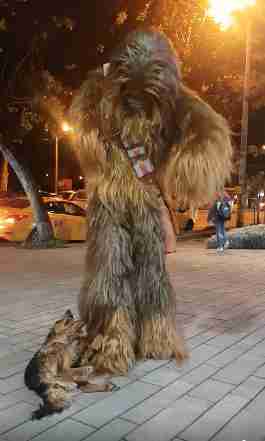 While many people stopped to take photos with the man, it was the dog that couldn’t catch his breath. It was like he was seeing the ‘human-version’ of himself right before his very eyes:

As we all sit and wait for the upcoming “Star Wars” sequel, this viral video is here to hold us over.

According to the man who shared the video, Elvis Alcalde, the pup was once a lonely street dog that was reportedly adopted by professors at the university.