When we think about a game of fetch, the first thing that typically comes to our mind is a human and their beloved dog playing a great game. As you are about to see, however, there are others who could also join in on the fun. That includes this crow, who was rescued from the woods after being orphaned. The rescuer cared for the crow and after she grew up, she flew away for a while but then she came back. Almost every day, the bird would come by to get some food and to play a game.

The man says that at times, the crow would steal things from the neighbors and then bring them to him. He had to take them back to his neighbors, usually with an amusing story. They sometimes say that crows will bring these little treasures to those they care for. 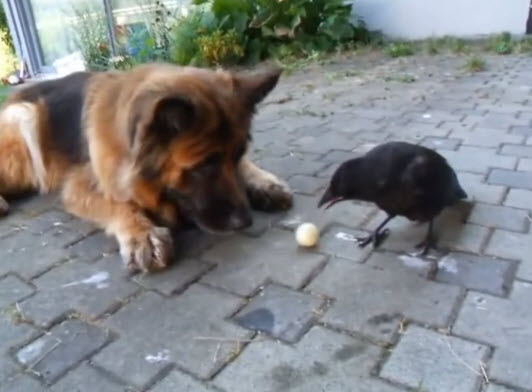 In the video you see below, a most amusing and enjoyable game of fetch is being played between a human and his beloved pet crow and German Shepherd. You really need to see it to believe it: