A Cat And Dog Were Found Abandoned On Someone’s Driveway. But The Bond They Have Together? Wow.

A dog and a cat were found abandoned on someone’s driveway a few years ago. Although they were all alone, they had each other. The cat was paralyzed, and the dog, who was covered in ants, stood by her side to protect her. It’s unknown where the pair came from, but wherever it was, they most likely came from the same place. The two were very close and had a special bond. 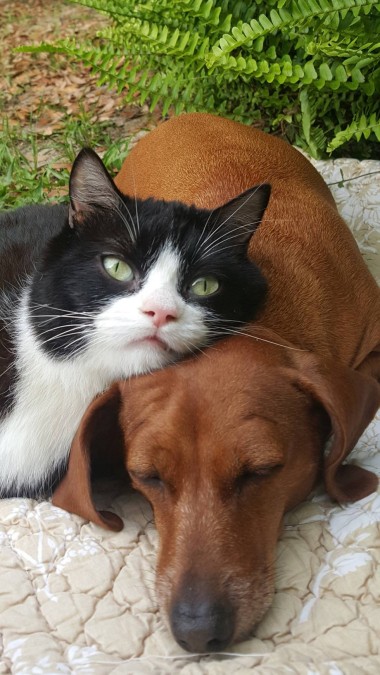 The pair was brought to Seminole County Animal Services and then found their furever home together with a lady named Jackie Borum. She named the dog Idgie and the cath Ruth, after the best friends from “Fried Green Tomatoes.” Borum was a pet groomer and would always bring them to her shop. Customers adored Ruth and Idgie and loved watching them play together. And it wasn’t just her customers who loved them; a video of the two went viral in 2014, racking up more than two million views!

Today, the two are still the best of friends and are loving every moment together. Idgie is still just as protective over Ruth now as she was on that driveway. When someone new approaches, Idgie makes sure that they are harmless first before allowing them to pet Ruth. Since adopting the pair, Borum started Project Paws, an organization that raises money to provide medical care for abused and abandoned animals. Idgie and Ruth are the face of the organization and their amazing story helps inspire people to give back.