Abandoned On A Bridge, This Pit Bull Had Been Severely Neglected! Hope For Paws Tried To Step In…

(Warning: The video below does contain some graphic imagery, please proceed with caution)

The rescue organization, Hope for Paws, receive a call one day from a young man about a pit bull that had been left on a patch of sidewalk on a bridge. It took Lisa Chiarelli and Eldad Hagar about two hours to find the abandoned dog’s location. And what they stumbled on was not a pleasant sight. The pit bull, which they named Dennis, was lying on the ground completely covered in ticks and unable to move. He was completely emaciated. Lisa and Eldad knew they had to work fast in order to save his life.

When the duo approached, Dennis was so sick that he barely even moved. After a few reassuring strokes to the pup’s head, they quickly wrapped him in some blankets and immediately rushed to the animal hospital. Upon their arrival, they along with a team of vets set to work. They removed all of his ticks and bathed him. It turned out that, in addition to being malnourished and covered in ticks, Dennis was also anemic. He was in need of a blood transfusion and fast. Lola, another rescue dog at Hope for Paws, was the willing donor. 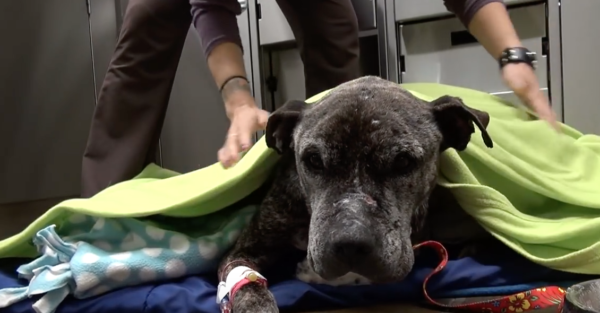 Unfortunately, not all stories end happily. Despite doing all that they could to help him, Dennis was just too sick and his body was too weak. And while he fought hard, five days after his rescue, Dennis succumbed to his illnesses. In those five days, Dennis was given the love he should have had all along. And while his story is a sad one, he will always be remembered.
Share on Facebook
Share on Facebook