Look at that cute little face! That is Penny, a beautiful cat with one blue and and one green eye. Given her different colored eyes and plush white fur, there is no doubt that she’s a pet influencer in the making. However, Penny isn’t concerned with Instagram fame as much as she’s interested in finding her forever home. In January, Penny was surrendered to the RSPCA Bridlington, Driffield district location by her elderly owner who couldn’t care for her anymore.

Penny had a tough time adjusting to life at a cattery because she was so used to living with her owner. And, as staff suspected, Penny is deaf – most white cats are. They don’t know if she was born deaf or if she experienced hearing loss after she was born.

Inherited deafness is seen almost only in white cats since researchers have found a correlation between blue eyes and deafness in white cats. And since Penny has a blue eye, it’s twice as likely that she’d be deaf than a cat without blue eyes.

The five-year-old Penny is up for adoption, but she’s searching for a home with adults only, where she would be the sole pet. Penny would also benefit from being indoors only, or if she has access to an outdoor space, that it would be safely enclosed. 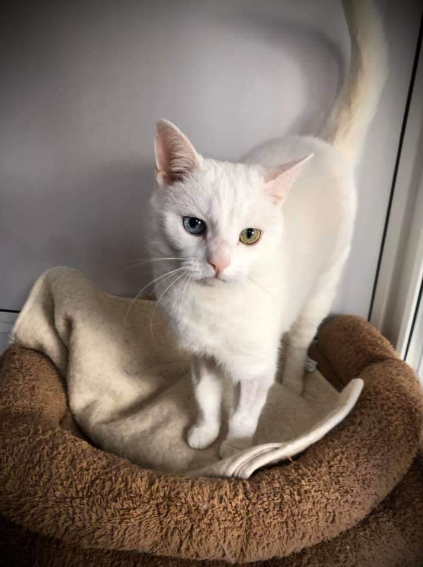 She added, “It took her a little bit of time as she was pining for her owner for quite a while which meant she was stressed and upset in the cattery. However, she has started to soften and loves affection and fuss from her favorite people!”

Hannah further explained, “We believe Penny, or Princess Penny as we call her, may also be deaf. We’ve carried out sound tests to check whether she responds to noises and sometimes she does respond but it could be that she is reacting to the vibrations of the sounds, especially if she was born deaf. We really want to see Princess Penny in a loving home with an owner who is patient and understanding as she has been through such a tough and turbulent time recently and we’d just love to see her find the forever home she deserves.”

The listing for Penny reads, “Penny is a really sweet girl who loves a cuddle. She is a bit stressed and upset in the cattery so she needs a home where she can be given time to settle in with someone who is good with cat behaviour. She doesn’t seem to like the other cats in the cattery so she would maybe be better as the only cat in the home. It is possible she could be deaf so she needs an indoor home. She is good at picking up vibrations though so she may have been deaf for some time.”

If you live in the UK and think that Penny would be the cat for you, then you can get in contact with the RSPCA Bridlington, Driffield and District branch by calling 07712 459857.

We really hope Penny finds the wonderful and loving forever home that she deserves!