Anyone who has ever had a pet – no matter how big or small – knows how scary it can be when you think you’ve lost them. This is why Steph Veerman’s father naturally freaked out when he thought he’d lost his daughter’s pet hamster, Chester.

Daniel Verrman, a lawyer, called his 19-year-old daughter Steph – a sophomore at Emmanuel College in Boston – while completely “blubbering.”

Chester is a hamster that has been described as being “pretty chill” and always fond of his downtime, so it’s not really like him to pull a fast one and escape. But when he was placed in his exercise ball, he somehow managed to open the ball and go on an adventure – and judging by Daniel’s texts to his daughter, he was pretty distraught by it.

One message read, “This is the absolute worst ever,” which was quickly followed by another that said, “I’m never going to forgive myself if he doesn’t come back”.

Daniel then texted again saying, “If I can’t find him today I’m not going to work tomorrow so I can keep looking.”

Steph finally replied to Daniel saying, “Dad – he’s just a hamster I don’t blame you at ALL. You shouldn’t skip work you are a lawyer and he is a hamster.” 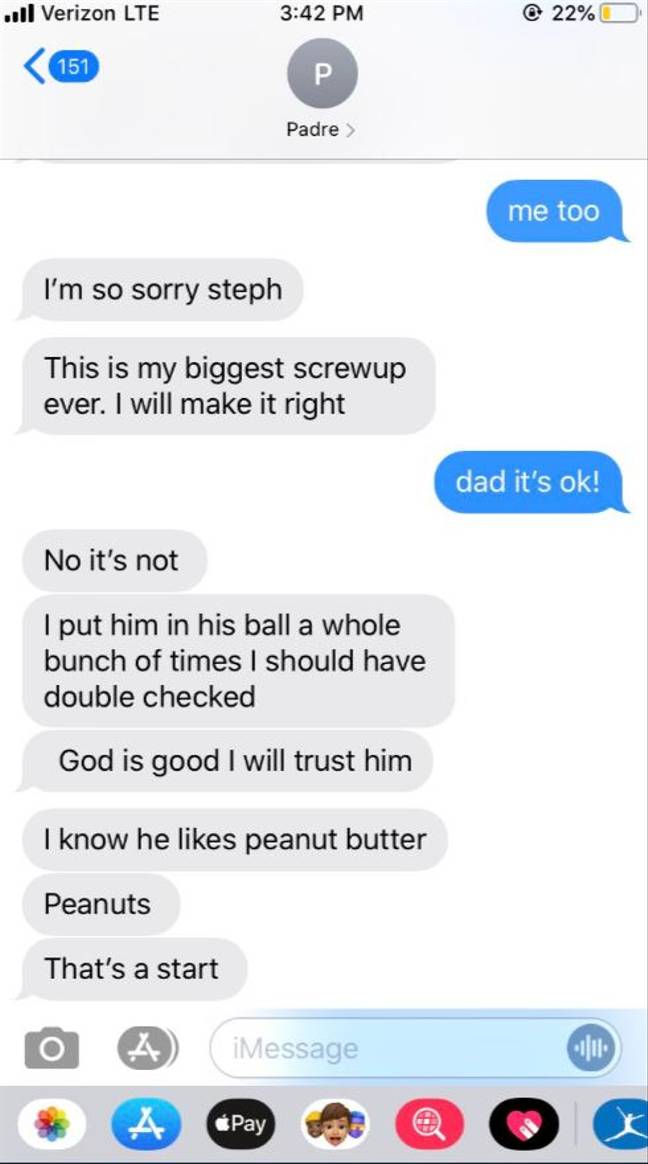 Daniel put things down he knew Chester would like. Credit: Twitter/@stephyj725

Not willing to give up, Daniel then decided to try and lure Chester home by putting out all of the hamster’s favorite nibbles, including peanut butter, as well as laying flour on the ground in an attempt to “see his footsteps.”

And they seemed to pay off as Chester eventually did make a reappearance and Daniel now refers to the day that Chester was missing as “the most stressful day in my life since I took the bar exam.”

Of course, Steph was quick to upload the joyful news:

However, after posting about it online with images of the text messages included, there were quite a few people who took issue with Steph’s comment about Chester being “just a hamster.”

She addressed these concerns by stating, “For all asking, this is Chester!! He’s the light of my life and not ‘just a hamster’, however, my dad was having a panic attack so I tried to calm him down by saying that!!”

Happy to hear that Chester is back home safe and unharmed.