Greyhound racing is a tough sport, as the dogs that participate often suffer injuries, illness or even death. The living conditions for these dogs frequently involve living in stacked crates or dirt-floored kennels, and they only race a few years before they pass their prime. After a life on the tracks, one lucky dog, Mosley, managed to find a new home and family. 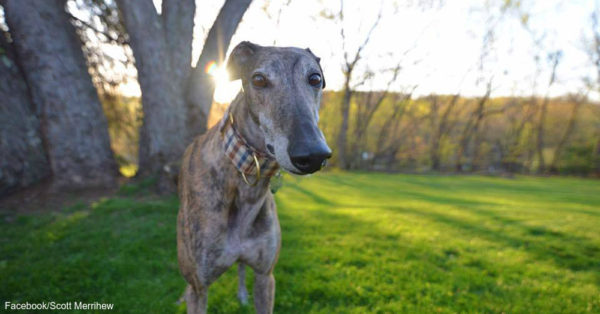 For Mosley, moving in with Scott Merrihew and his wife was not easy. Having never experienced normal family life, he became territorial and showed separation anxiety when his new owners left him at home. Life for active racing dogs is often loud, as they’re surrounded by constant barking. In his new home, the lack of noise took adjustment. His new owners report that it took a few years before he turned into the goofy, relaxed dog he is today. 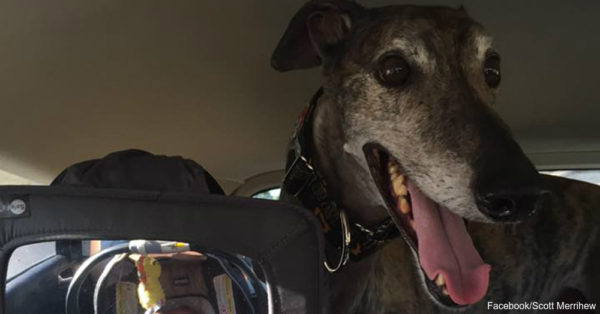 When Mosley was 8, his family heard good news: They were going to have a baby. During the pregnancy, Mosley became more loving and wanted to cuddle with Scott’s pregnant wife, especially as the time of birth approached. Once the baby arrived, Mosley was interested, but he remained gentle and always provided plenty of space for the baby. 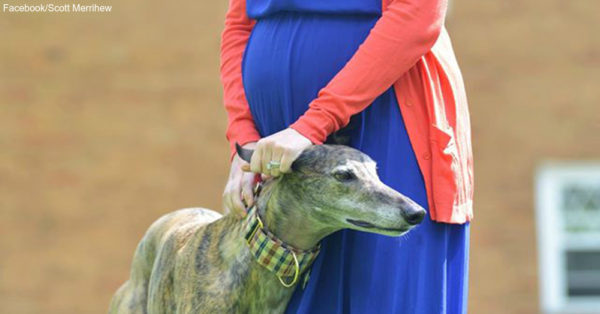 Mosley is so comfortable with the new baby that his owners leave him in the room with the child despite locking both of their cats away from the crib. Clearly, Mosley has successfully made the transition from a racing dog to the family pet. Because greyhounds can only race a small portion of their lives, many of these dogs are available for rescue. As with Mosley, the transition to living in a new home is often difficult, but the result is worthwhile. If you’re still undecided about adopting one of these loving dogs, watch a video of their head tilts here.