Puzzles can increase your pup’s confidence, boost her intelligence, and keep her entertained for hours. The right puzzle can also slow down a speedy eater or keep a “naughty” pooch distracted.

Obtaining puzzles doesn’t have to be expensive — in fact, you can easily make your own. Here are some great ones you can create from home with things you probably already have around the house.

Bone Under a Box 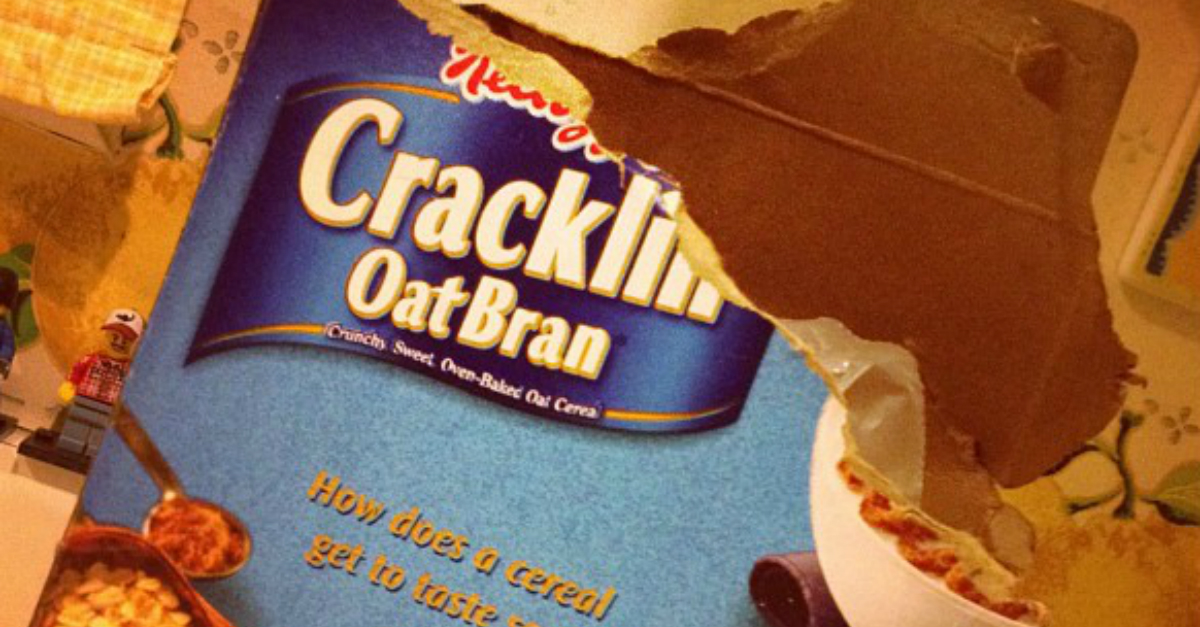 If you want to keep your pup distracted, try hiding a bone, some treats, or a small pile of food under an old cereal box. Your pup has to figure out how to knock it over in order to retrieve the treat. 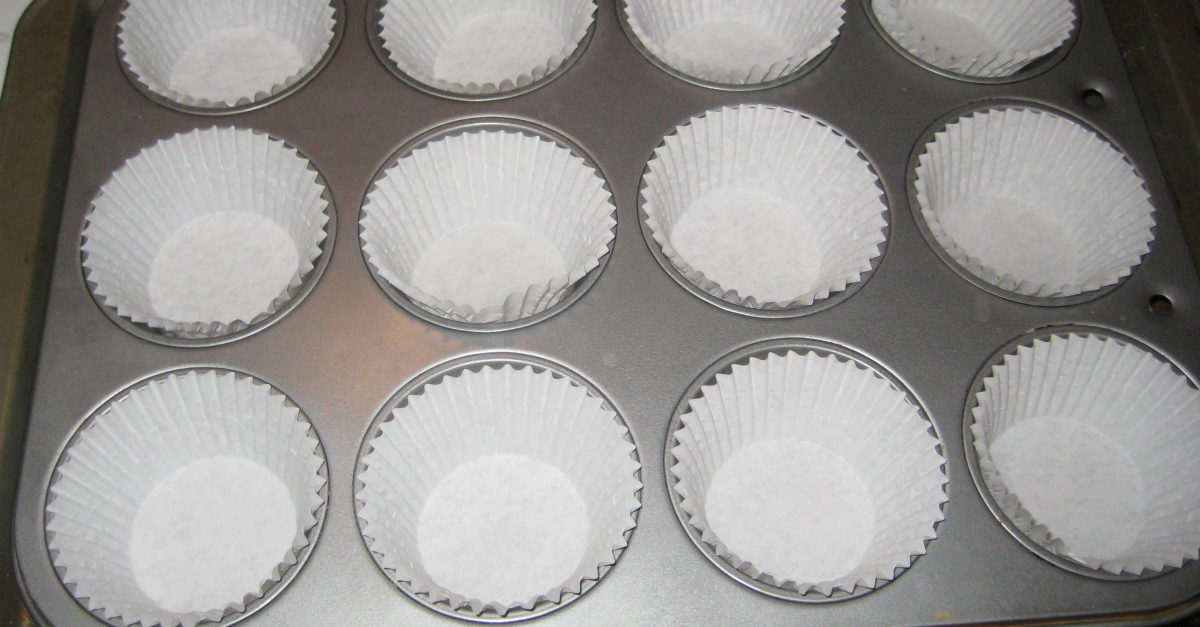 For a slightly harder challenge, sprinkle doggy treats into each cup of an old muffin tin, then pop a tennis ball on top of each muffin cup. Taking the time to remove each tennis ball in order to reach the food is an especially useful way to slow down an overzealous eater, according to Live Well Network. 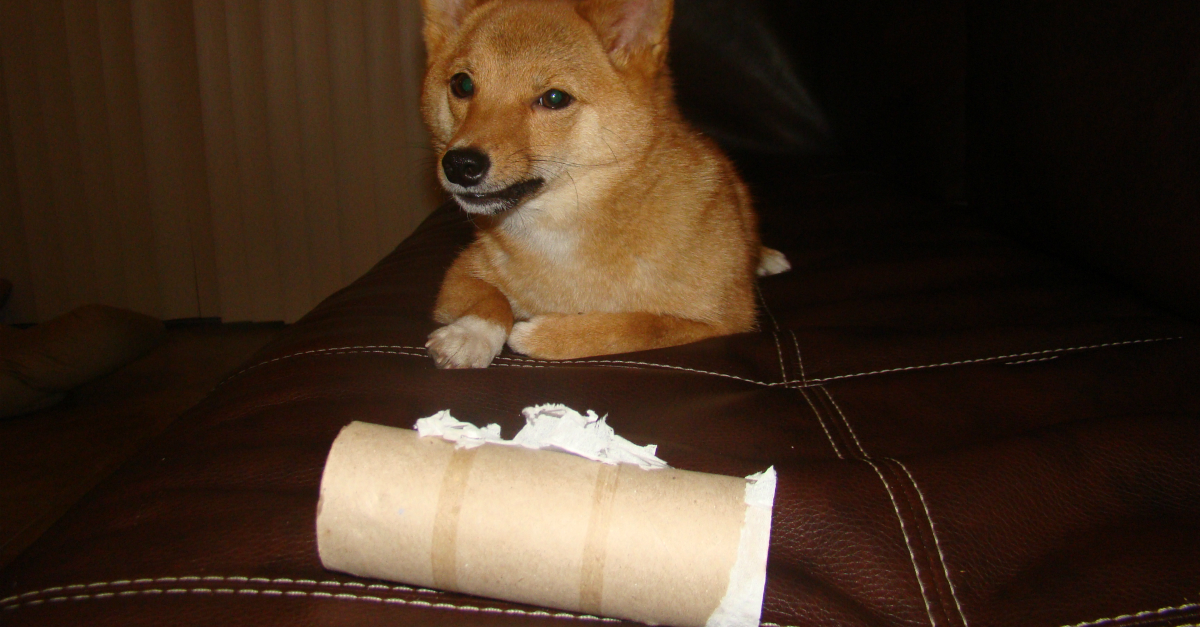 If you have a pup who loves to chew, make him a treat-filled chew toy with some old toilet paper rolls. Simply fill the rolls with dog food, and bend the edges to keep them closed. Then, hand them to Fido and let him “ruin” them. 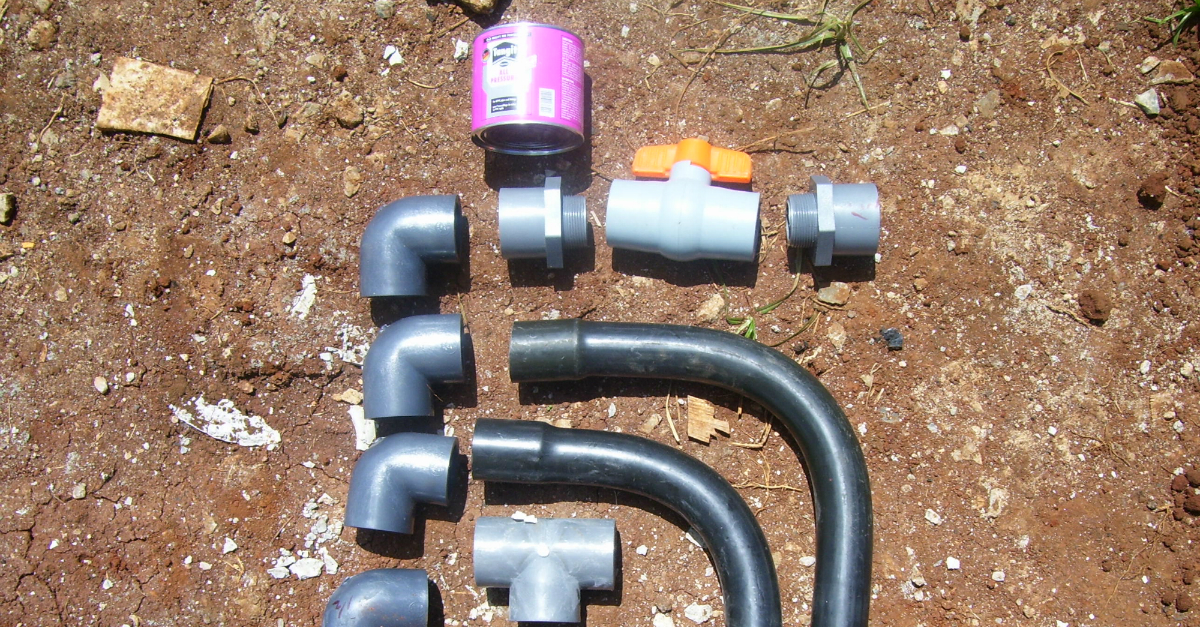 If your pooch chews through a piece of cardboard too quickly, Bark Post recommends making his puzzle more challenging by using a bit of PVC pipe. Simply, head to the hardware store and buy a few lengths of PVC and some end caps.

Cut the pipe short — about the same length as a bone. Then, fill it with treats and a few smears of peanut butter. Pop the end caps on and drill some holes in the side. Now, your pup has to roll or shake to reach the treats inside this virtually indestructible toy.

Keep an eye out in case your dog decides to chew on the pipe, and make sure she doesn’t eat up any small pieces that might show up during the search for those hard-to-get treats. 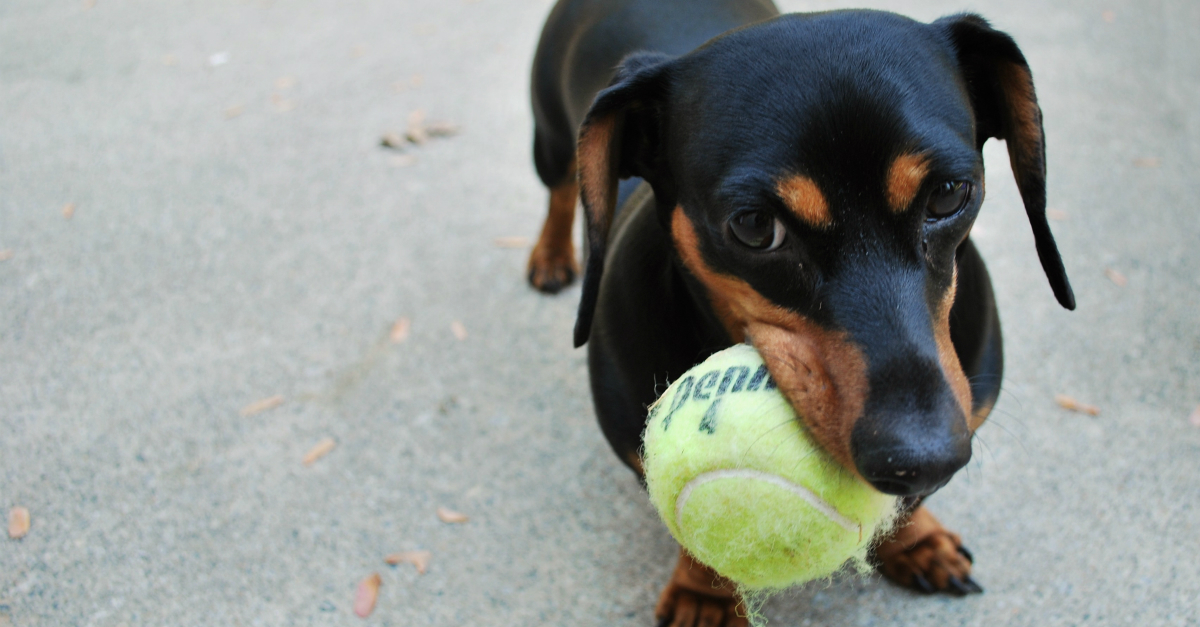 For a tossable puzzle, drill holes on either side of a tennis ball, and fill the empty space with treats. Put a bit of peanut butter or other soft food at the top of each hole to hold the dog food inside the ball. Then, throw and let your dog fetch those treat-filled tennis balls. 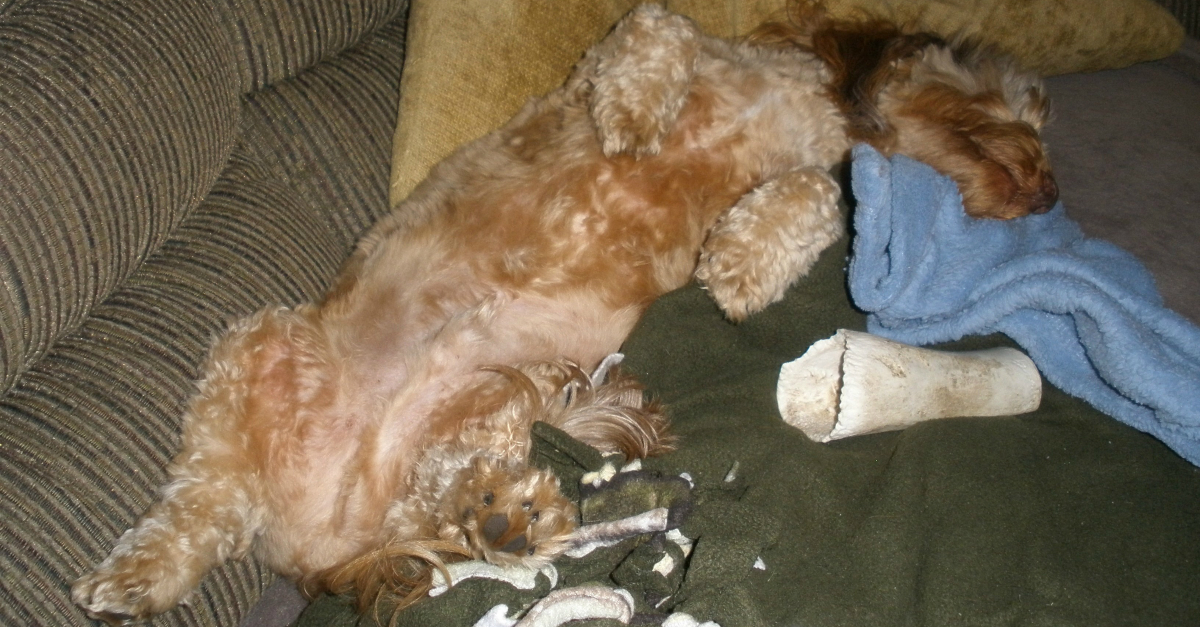 If you want to wear your dog out, wrap some biscuits in a blanket, and knot it a few times to make finding the biscuits a fun challenge. You can also make a combo game by stuffing bone-hiding boxes or toilet paper treats into the blanket instead. 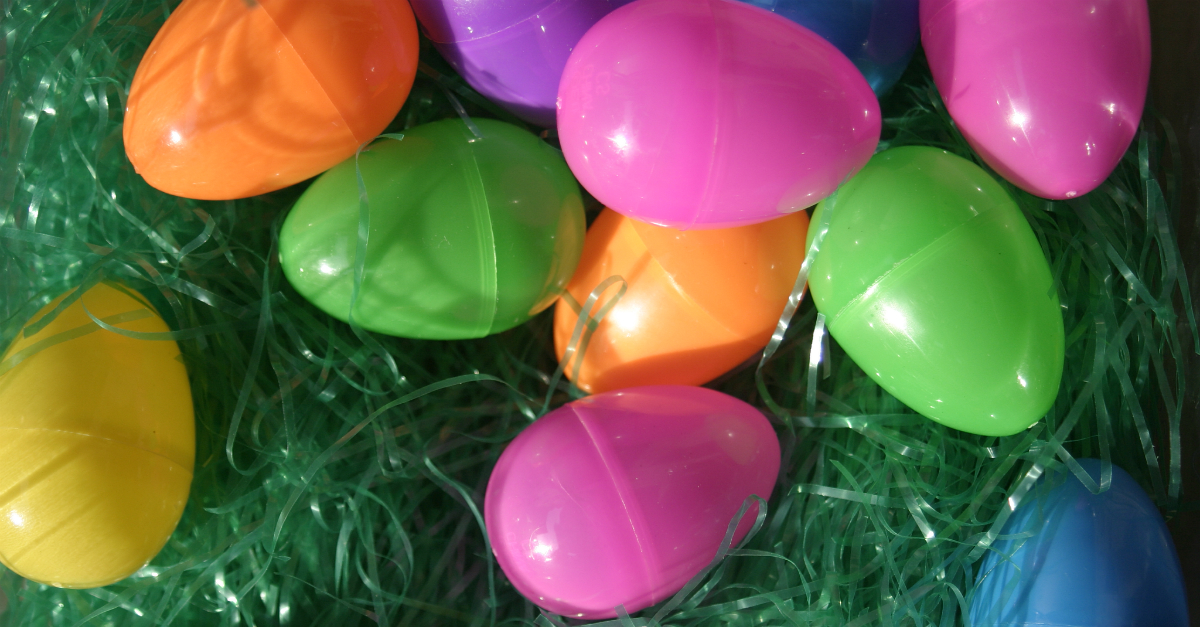 Around the holidays or any rainy Tuesday, entertain your pup with an Easter egg hunt. Simply fill plastic eggs with treats and spread them around your house. If your dog struggles to find them, try using more pungent foods until she gets the hang of the game. 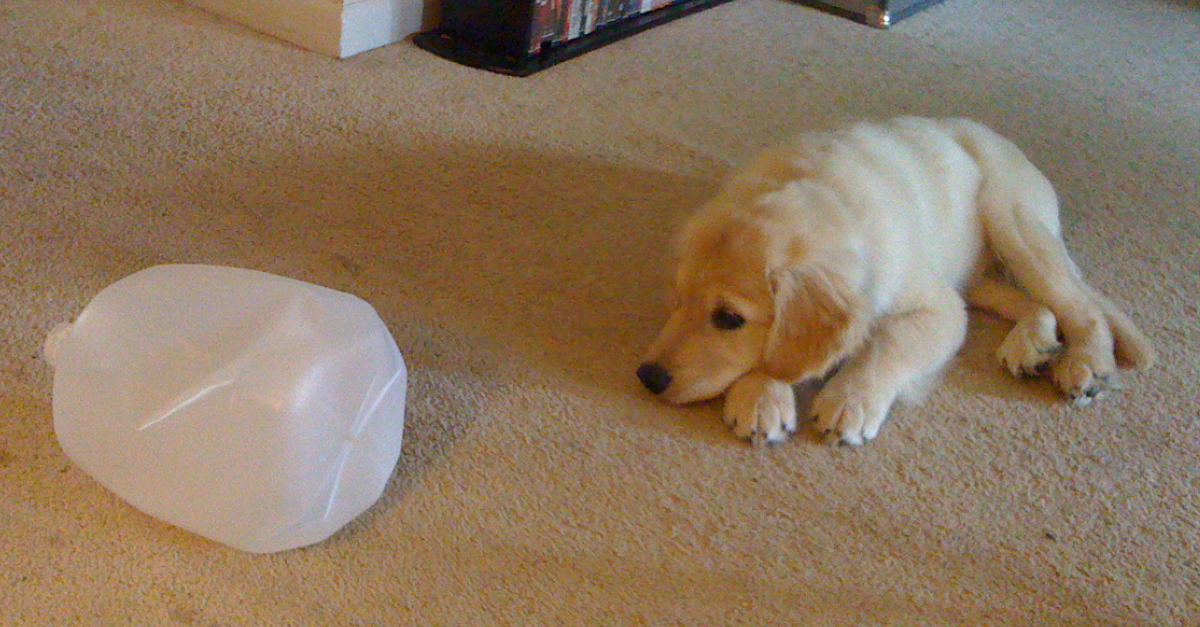 For a jolly good time, all your dog needs is a plastic jug. Rinse out an old milk or juice container, and push an old paper towel roll filled with dog food inside it. Keep an eye on your pup to make sure she don’t start chewing on the container though!