Terrified Cow Who Escaped From A Slaughterhouse And Ran Through NYC Is Now SAFE At A Sanctuary!

A cow escaped from a slaughterhouse in Jamaica, Queens and ran through the intersection at 164th Street and Jamaica Avenue in the outer NYC borough. People stood around watching as police chased after him, finally cornering him in a parking lot. Many were upset to hear that they returned him to the slaughterhouse. But thanks to the persistency of an animal rights activist, this cow is now living in his new furever home! 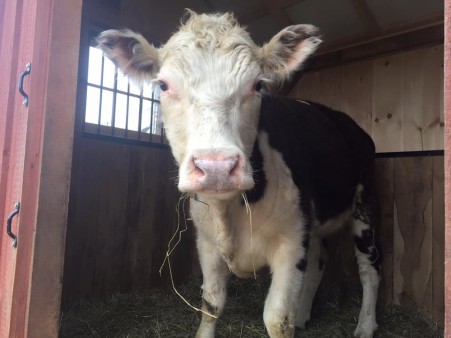 A worker at the slaughterhouse, Jamaica Archer Live Poultry and Meat Market, said they the cow would be killed the next day. Mike Stura, founder of Skylands Animal Sanctuary and Rescue, hooked up his trailer and headed towards Queens. He called the market to try and get the cow, but the worker said a family already had reserved him and refused to give him up. But Stura didn’t take no for an answer. He continued his drive to Queens and arrived at 7pm to an empty market. He stayed there in his truck overnight and waited for the workers to arrive in the morning. Stura pleaded his case and finally persuaded them to give him the cow. He brought the cow to the veterinarian to be checked out and then brought him to Skylands in New Jersey. He named him Freddie after Freddie Mercury, and is settling in to his new home very well. Thank God for this man who saved Freddie’s life!!