This Autistic Boy Found Hope In The Form Of His Service Dog That Was Trained By An Unusual Source!

Zach Tucker is a young boy with autism living in Colorado Springs and he was having a very difficult time with things. He was prone to anxiety attacks, couldn’t interact with his classmates, and absolutely hated to be touched. His parents were at a loss on what to do. Grasping for straws, his parents found Zach help in a very unlikely place!

Chris Vogt is a prisoner in the state prison of Colorado. In 1998, he was found guilty of being an accomplice to a murder and was given a sentence of 48 years in jail. Now, what could a little boy and a prisoner possibly have in common? Clyde the service dog! At the prison, they have a service dog training program that the prisoners can take part in. They get dogs from the local shelter and the prisoners train them to be service dogs for the blind and/or deaf. Chris had other ideas. He wanted to train service dogs to help autistic children. So he taught himself how! 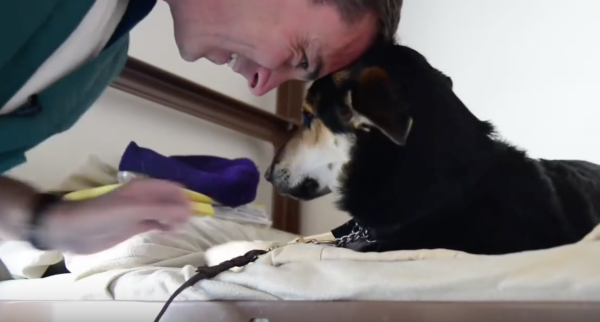 Chris went all in when it came to training these service dogs. He took them into his cell for training in order to practice various different scenarios and behaviors that the dog may encounter with their designated child. In Zach’s case, Clyde was trained by Chris to help with Zach’s anxiety. When his anxiety would start to spike, Clyde would be able to tell and break him from the ensuing attack. The even more unbelievable part was that in order to train Clyde to fit Zach’s individual needs, Zach had to be a part of the training. On the weekends his parents would take him to the prison and under the watchful eye of the guards, he and Chris would work with Clyde together! 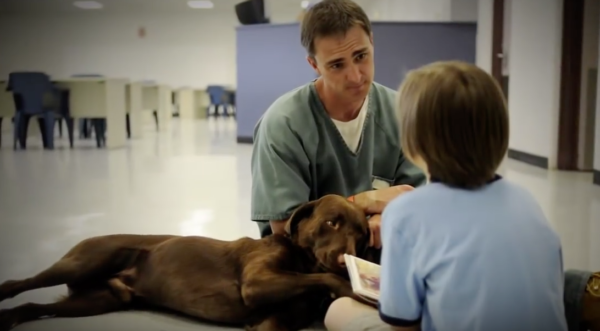 Since having Clyde, Zach’s anxiety has lessened and he has been able to interact better with other students. And it’s all thanks to this man who, accepting that he did a very bad thing, is trying to make the most of his time in jail by making a difference in the lives of autistic children and their families!
Share on Facebook
Share on Facebook