Amur tigers are powerful and beautiful animals – that do not belong in a circus.

Circuses that have animal acts are becoming less and less – thanks to people speaking up for the neglected and abused animals. But such growing awareness still wasn’t enough to save a six-year-old tiger, Zena, who was forced to perform at a circus in Russia. The stress and unnatural environment proved to be too much.

A ring surrounded by wire is the main stage for a circus in Magnitogorsk. Seven tigers are brought out and rest on the outer ring. The brother and sister handlers, Artur and Karina Bagdasarov, control the tigers with long sticks that they crack on the ground like whips. A large crowd gathers and the duo forces two tigers to leap through multiple rings of fire. However, the end result was one of the majestic animals collapsing with convulsions feet away from the audience. 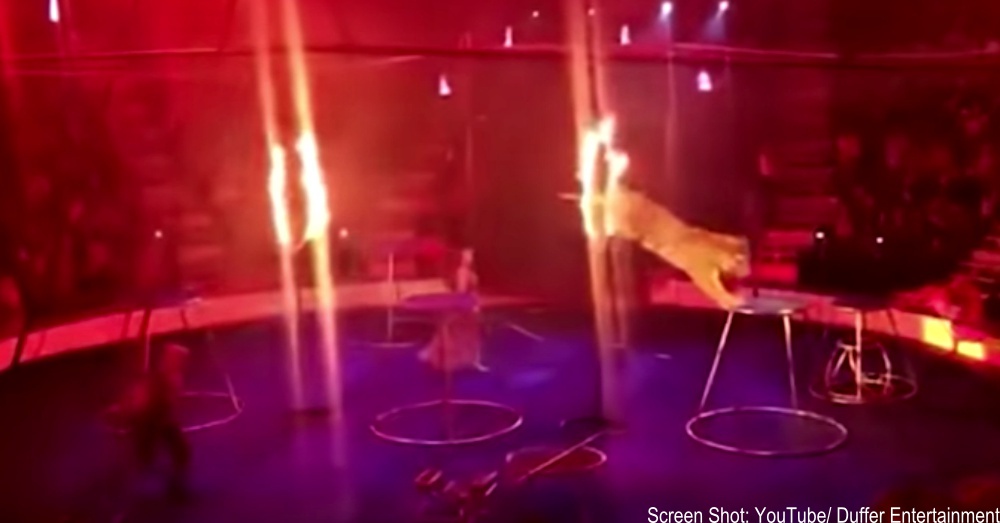 The horrifying scene continued when Artur grabbed Zena’s tail and dragged her away. All the while, Karina is cracking her stick to keep the other tigers from attacking. Their actions have outraged people around the world calling them “sadists.”

The handlers defended their actions by saying they did what was necessary to save Zena from being attacked by the other tigers. They claimed that a cat fight would have broken out otherwise. Before she was removed from the ring, buckets of cold water were thrown on the tiger to try and bring her to her senses. 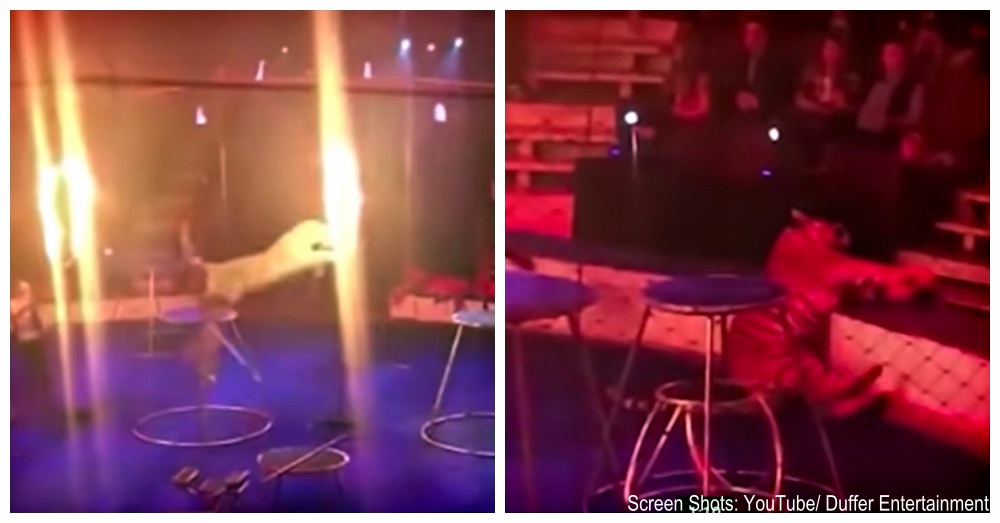 Karina said: “Artur did his best to bring Zena back to senses and he did all the right things – he touched her reflexive zones, he poured water on her. The main thing was to stop other animals from attacking. For them a weak animal is a target, it is an order to kill.”

“If we had not stopped them, it would have ended with a bloody fight. And nobody knows who would have been alive after that.” 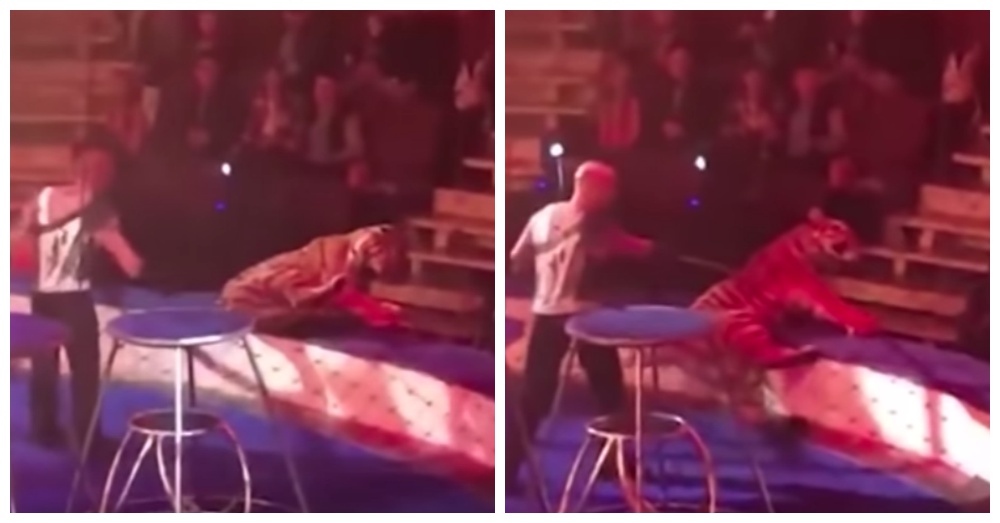 Artur Bagdasarov states that he had no choice but to pull Zena by her tail. “I had to drag the animal away from the wire fence, she was about to fall between the stage and the wire,” he said.

“I dragged her to a safe place where there were no other tigers around. Any other tiger could have attacked her when she was so weak. Karina was controlling six animals so they did not do any harm to the tigress. So the tigress was away from spectators and away from other tigers.”

He goes on to say, “Why the tail? What else could I drag her by? She has claws on her paws. She is not a soft cat. I could not lift the whole tiger. When I watched this video, I realized that I am a healthy man, she weighs 200 kg. I was only shocked that I managed to drag her.” 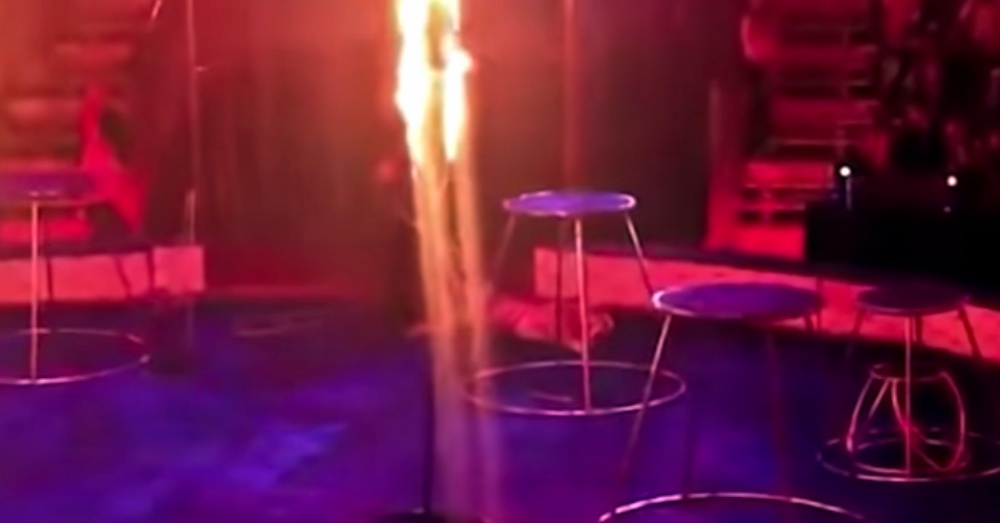 “What if I had taken her away from the stage? She would have recovered there and what would I do next? As soon as she recovered she became a normal tiger, with the same claws and teeth.”

This makes one believe that situations like this have happened before. Just more proof as to why animals need to be banned from performing in circuses and brought to proper sanctuaries. 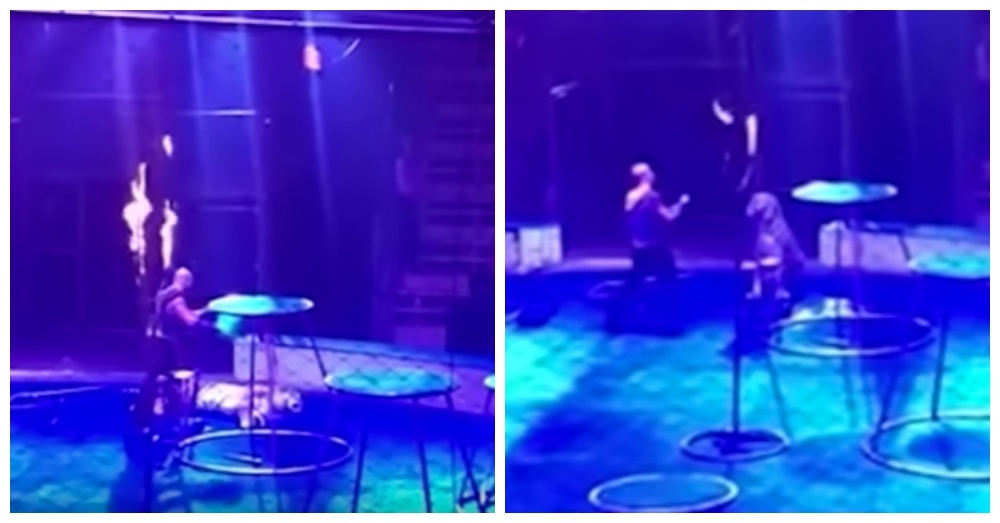 The pair insists that the tiger collapsed for unknown reasons. The video that captured the heartbreaking scene shows the tigress eventually coming around after her ‘epileptic fit’. When she finally stood on her feet, the crowd applauded. Artur said, “all is ok, stand up, stand up my girl”.

Karina states, “These things happen to animals. Maybe the blood sugar level dropped. Perhaps it was blood pressure attack, maybe hormones. We have already called the vets and blood test was taken. Our vet is coming from Moscow soon, he will scan Zena’s liver and kidneys.” However, Zena was reported to be “eating well” ahead of her performance this past Sunday.

Critics are not holding back and letting the pair know how they feel. “You are sadists! Such a dirty occupation. Shame on you,” wrote one critic.

“Please ignore any circuses with animals. These “trainers” are sadists. Animals are very rare in circuses abroad.”

Watch the horrifying event in the video below.