Abandoned At The Airport, Chewy The Chihuahua Reminds Us Of A Much Darker Issue

Getting lost at the airport rarely makes for a fond memory. Being left at one, even less so.

But that’s exactly what happened to little Chewy, a 3-month-old chihuahua who was recently abandoned in a restroom at a Las Vegas airport.

While Chewy’s predicament, and visible injuries, may seem prompted by someone with cruel intentions, the handwritten note left alongside the hopeful pup is enough to restore your faith in humanity. 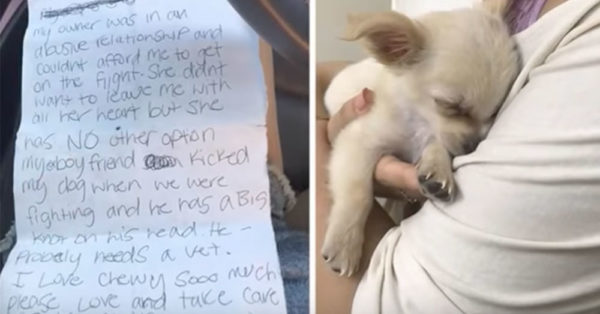 “Hi! I’m Chewy! My owner was in an abusive relationship and couldn’t afford me to get on the flight. She didn’t want to leave me with all her heart but she has NO other option,” the note read. “My ex-boyfriend kicked my dog when we were fighting and he has a big knot on his head. He probably needs a vet. I love Chewy sooo much — please love and take care of him.”

Coming from an abusive relationship left Chewy’s owner with little choice in the matter, but thanks to a kind soul named Connor, and Millie’s Dog Rescue, this chihuahua’s future is looking much brighter.

“My heart dropped to my knees,” Millie’s president and founder Linda Gilliam told The Dodo. “I didn’t hesitate to accept him and instructed my foster to immediately get him to an ER.” 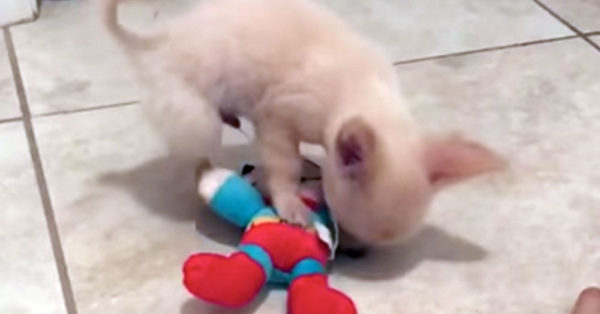 Where Chewy was from, or where his previous owner has relocated, are yet unknown. And, as is the case with many instances of domestic violence, that information would not be publicized anyway. But Chewy’s story brings up an often overlooked element of such cases; when violence splits apart a relationship, pets may be caught in the crossfire and suffer just as much.

“This is a very overlooked issue as a whole,” Gilliam said. “We also wanted to try and get the message to Chewy’s mom that she did a brave thing and that he is safe and will have a great life.”

See how Chewy is holding up in the video below.

Help rescue an animal from an abusive situation!

More than half of domestic violence victims in shelters leave their pets with their abusers, and up to 40 percent of victims are unable to escape because they are concerned about what will happen to their pets when they leave.
Your compassion can help those in abusive situations get the help they need without endangering their beloved animals!
Make a difference!