UPDATE: Ohio Man Who Was Arrested, Fired For Killing Dogs Pleads Not Guilty

Mike Chedester, the outspoken hunter who admitting to killing his neighbor’s two dogs with a rifle from his tree stand, has pled not guilty to both associated felony counts.

Chedester was charged under Goddard’s Law, which makes it a fifth degree felony to knowingly cause serious harm to a companion animal. He was arrested by a Belmont County Sheriff’s deputy on Monday, Nov. 28, the first day of gun season, after shooting the dogs, taking pictures of their dead bodies, and bragging about the kill on Facebook. In his Dec. 12 arraignment, Chedester’s attorney Don Tennant entered a not guilty plea in the case of both charges.

Facing a maximum of two years in prison and a $10,000 fine for the killing of the dogs, Chedester maintains he was acting within Ohio law, as they were disturbing the deer he was after. According to WTOV9, he has also made a $2,000 “good faith payment” against the assessed value of the two dogs.

Chedester’s defense hasn’t assuaged the ire of neighbor Pete Byers, the owner of the deceased Emmy and Bella.

“I think it’s just an insulting legal stance that he’s taking. I don’t think there’s any actual regret or remorse. I think he’s just trying to get out of it,” Byers said at the arraignment.

Public outcry stemming from the incident has not only hastened prosecutors’ efforts to get a full conviction for Chedester, but AEP Ohio has since fired the man from a full-time position.

After shooting his neighbor’s dogs, keeping their collars as trophies, and posting images of the dead pets with callous bravado, an unrepentant Ohio man has been fired from his job and now faces two felony charges.

The accused Mike Chedester fancies himself a real outdoorsman and makes his hunting forays well known on Facebook. The last time he visited his Belmont County tree stand was no different, although the consequences certainly were.

Chedester’s neighbor, Pete Byers, was readying for a trip when his two dogs, Emmy and Bella, escaped from their yard. Assuming the worst on the first day of the hunting season, Byers knew he had to move quickly.

“I turned around to lock that gate. I turned around my dogs were gone,” he told WTOV9’s Kate Davison. “And it’s the opening day of gun season so I’m like dying inside. I’m scared to death.”

As Chedester surveyed the woods for potential targets that day, he may have been unaware that his neighbor’s Doberman and Weimaraner, Emmy and Bella, had escaped their yard and were nearing his stand. He may have even confused them with deer, or even for vicious beasts as he would later claim, but that would soon be proven otherwise.

Byers and his friends took to the woods on ATVs and searched for the dogs for hours. Reports from other hunters in the area were anything but optimistic, as they related the sounds of gun shots followed by dog yelps were heard earlier in the day.

As the search continued, Byers and company came across some paw prints, which they followed for 800 yards to Chedester’s stand.

“I asked him, ‘Did you kill my dogs, man? I want to know so I can bury them.’” Byers told WTOV9. “Meanwhile he keeps eyeing this new brush pile. That’s new and fresh. Then he kind of looks down his nose at me and says ‘Yeah, I killed your dogs. You want me to buy you two new ones? I’ll buy you two new dogs.’”

Any repentance Chedester may have shown to Byers during their talk, and while they waited for a Belmont County sheriff deputy to arrive, was grossly outweighed by fact that he posted pictures of the dead and bloody Emmy and Bella on Facebook.

“Shot 2 stupid dogs that got off their leash it was a clean kill now leave me alone,” read one of Chedester’s posts, as he checked in to Facebook that day.

“I asked him where are they and he looks at me like I’m confused and he points right there to my brush pile. And there’s Emmy’s paw, sticking out from the logs.”

In accordance with Goddard’s Law, which makes it a fifth degree felony to knowingly harm a companion animal, local prosecutor Dan Fry says Chedester is facing two felony charges. A conviction won’t bring back Emmy and Bella, though.

“They were just really good friends, unconditional love all the time,” Byers said. 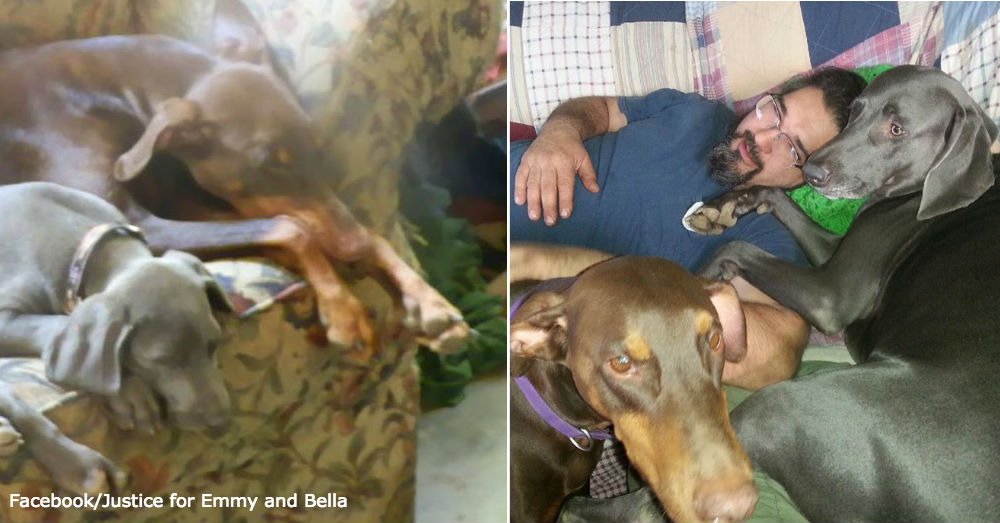 Chedester has since been let go from American Electric Power, a Columbus, OH based public utility that found little merit in their former employee’s behavior.

“AEP expects the highest level of conduct from our employees, both on the job and outside of work,” the company released in a statement. “We are saddened by the situation that unfolded this week involving an off-duty AEP Ohio employee and the death of two dogs. This individual is no longer employed by AEP.”

The Animal Rescue Site wishes the best for Byers during this troubling time. There is no excuse for such wanton destruction of life, and as such, it’s important to recognize the countless other dogs, much less appreciated than Emmy and Bella, who face painful experiences every day.

Signatures are being collected for a petition to list animal abusers on a registry in order to protect the lives of animals living in close vicinity. Follow this link to sign the petition and tell the head of the USDA, Thomas Vilsack, to improve our treatment of animals.

Convicted child abusers are automatically entered into a national public registry to inform people of their whereabouts and to ensure children’s safety. This helps to keep parents informed about potential danger in their neighborhoods.
Please sign the petition telling the head of the USDA, Thomas Vilsack, to enact a national animal abuser registry today!
Make a difference