The CEO of an LA-based environmental consulting firm promises his clients excellence, but it appears Jeffrey Previte doesn’t practice what he preaches at home.

The Daily Mail published security camera footage of the 46-year-old executive beating his 4-month-old puppy, Beachy, in Previte’s Santa Monica, CA, condominium. The brutal lashing, which was clearly captured on the building’s security camera, drew the attention of the building concierge, who heard the frightened puppy crying out in pain from across the lobby. 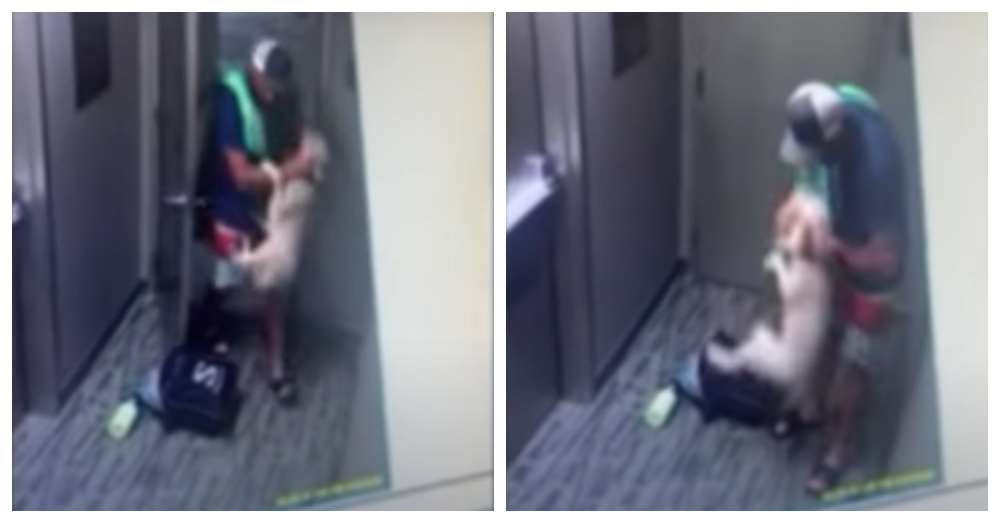 “I heard the dog screaming and when I looked on the camera, I saw him beating the dog,” the unnamed concierge told the Daily Mail. According to the newspaper, the shaken employee later told Previte about what he’d seen, and shared his plan to file a report with building management.

Unfortunately, this courtesy call didn’t inspire any remorse or regret on behalf of Beachy’s abuser. “He became irate… and then he hung up on me,” the concierge told the Daily Mail. “He apologized the next day, but I didn’t think it was a sincere apology.”

Nor did the official complaint — which describes Previte as choking, slapping, and slamming the terrified puppy against the wall — seem to inspire any contrition. When the Daily Mail, which published the complaint in full, reached out to Previte for comment, the executive insisted he’d done nothing wrong.

This very disturbing footage has ignited a virtual firestorm on Twitter, where outraged netizens are demanding Previte be fired and/or put into jail. At time of writing, it appears at least one of these things has already happened. EBI Consulting no longer refers to Jeffrey Previte in the “Our Team” section of their website.

The man you hired #JeffreyPrevite enjoys beating animals & says "there's nothing illegal about what I did."

Do you also condone & stand behind the idea that beating animals is legal?@ASPCA #ebiconsulting

We’re still awaiting word about the puppy’s well-being and/or whether criminal charges will filed against Beachy’s owner. We do know for sure that this puppy must be immediately removed from Previte’s “care” for his own safety, especially if his owner believes this is an acceptable way to treat animals. Privilege and entitlement should never excuse animal abuse!

Learn more about this disturbing incident in the video below: