‘What Was That?’ Cat With Over 2 Pounds Of Matted Fur Found In Pennsylvania

As Paul Russel glanced through his ailing relative’s Pittsburgh basement, he didn’t expect to find much more than a timid cat and the varied collections of a man with Alzheimer’s disease.

What he found was seemingly far from feline, and more the stuff of nightmares.

“When they put him in the nursing home, I thought, ‘Hey, he has a cat,'” Russel told The Dodo. “The house was still open, so I went down and left some food for the cat until we figured out what we’re going to do. Then somebody mentioned that he had a second cat. So I started searching around, and suddenly this huge creature darts out from under the bed and runs down to the cellar, and I thought, ‘What was that?'” 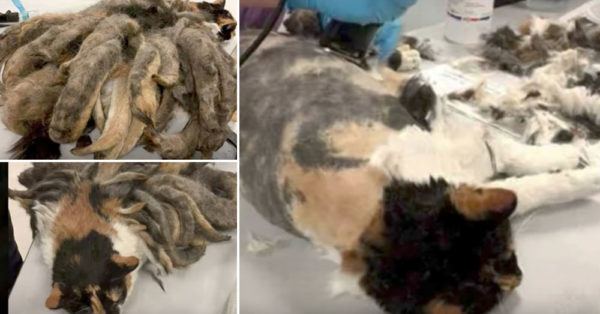 “That” was Hidey. Once a slightly oversized house cat, the neglected calico was now covered in over 2 pounds of matted fur.

“At first I thought it was a cat who had a blanket draped over her that she dragged down,” Russel said. “But no — it turned out to be Hidey. She hid down in the corner of the cellar. I’m down there with a flashlight looking — it was almost like a horror movie. And I found her hunkering in the corner. Probably very scared. Probably in a lot of pain.”

Russel took the cat to the Animal Rescue League and Wildlife Shelter, where staff were equally amazed at the state of Hidey’s coat. After images of the matted cat were posted to Facebook, one ARLWS staff member even found herself explaining how the image was not altered in Photoshop. 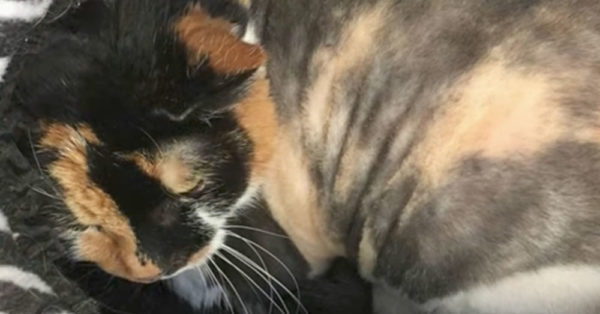 Two pounds of fur were removed by electric clippers over the course of a few hours after Hidey was anesthetized. Shelter workers estimate that it must have taken years for the cat’s fur to form such large mats, but the fact they stayed intertwined in individual masses helped the removal process along.

Now homed and happy, Hidey is enjoying her new life and new hairstyle.

“Hidey is getting acclimated at her new home,” Caitlin Lasky of Western PA Humane Society told Love Meow. “There are hopes she will warm up to her new owners now that she is feeling better.”

The Animal Rescue Site wishes the best to Hidey and her new owners. For many animals this winter and every season, a warm home is a distant dream. Facilities like Special Pals Shelter in Houston, Tex., have the ability to house homeless animals and find them loving forever homes, but financial obstacles are keeping the shelter from meeting its adoption goals.

Special Pals is limited by their current facilities, but they also know that adoption rates spike by as much as 25% when animals have dedicated outside areas. Click the button below to help this shelter extend second chances to even more animals than before.

Special Pals shelter in Houston, TX takes in hundreds of dogs and cats in need every year, rehabilitates them, and rehomes them. They also offer low cost or free services for community members, and provide free education for new adopters. Unfortunately, Special Pals has serious obstacles in their way as they try to scale up their operations and rescue and rehome more cats and dogs.
Your support for dedicated outside areas can effect an increase in adoption rates by 25 percent!
Make a difference