We all love a good nature documentary. It’s great having a front row seat to the mysteries of the wild. But sometimes we get lucky and get to observe the natural happenings unfolding right in front of us. And one woman from Singapore not only got to witness a very interesting moment, but she caught it on camera too.

The hilarious video in question was a fight that had broken out between rats, which was being witnessed by a cat. Unlike what one would expect, the cat didn’t bother to get mixed up with the fight. Instead, the feline just sat back and watched the madness unfold before him.

As the woman explained, she had been making her way home one evening. when she heard unusual sounds not far off. Upon getting a closer look, she realized it was two rats engaged in a pretty brutal brawl. 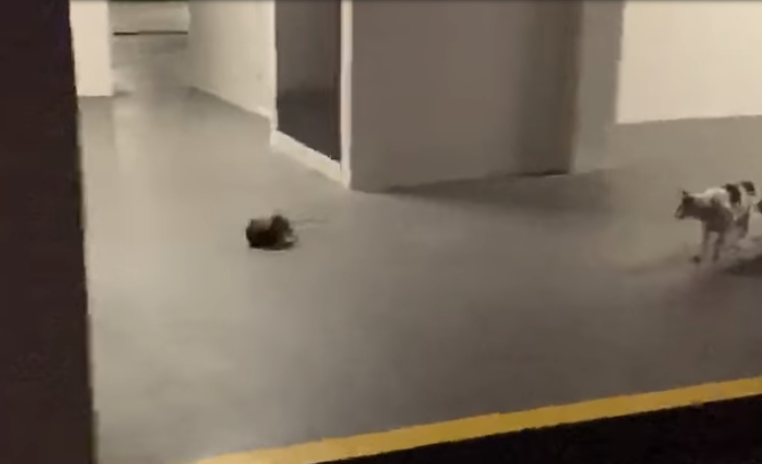 The clip starts out with just the two rats fighting. The two rodents are really going at it – they are quite vicious. Then, the cat comes strolling around the corner. That is when the cat stops. It looks on towards the fight – the cat’s expression definitely suggests he didn’t mean to interrupt. The rats pay the cat no mind. They continue to fight until they finally finish in a statement with each rat running off in a different direction. And the cat didn’t chase either one.

The woman couldn’t help but post the video to social media afterward. While it was an entertaining video and something she thought was a rare sight to witness, she never expected it to reach viral status. But after watching it we can see why – it’s not every day that you get to watch a cat watching two rats duke it out in an apartment complex.

Plenty of people were impressed with the clip. A lot of them joked that perhaps it was the cat who put the two rats up to the brawl. One person on Facebook even commented on the video, “Whoever wins the rat fight battles the final boss, which is the cat. That is why the cat is not just really watching them, but waiting for the victorious challenger.” We can only speculate what was going on in the cat’s mind, but we can assume it was just as shocked as the woman who was recording the video.

Watch the entire footage below: