Stuck Under A Moving Train In 40 Below Weather, Frostbite Was The Least Of This Cat’s Concerns

Brad Slater, a train conductor, was doing a routine safety check when he heard cries coming from under the train.

It turned out to be a little cat who was stuck in the engine deck of the train. He was believed to have been there for nearly 12 hours, riding under the train with temperatures that reached as low as -40 degrees Fahrenheit.

The cat suffered from frostbite, but it’s a miracle that that’s all that happened. They nicknamed the kitty Q-199 after the train he was found on. The train was traveling from Winnipeg all the way to Edmonton, and it’s unknown when or how the cat got there. 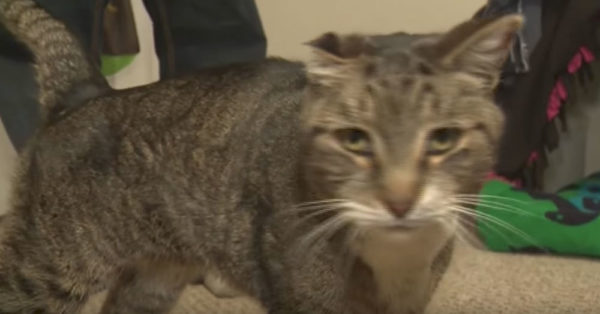 Q was an extremely friendly cat, so it was hard to believe that he was a stray. It turns out that he had a family after all. When his family saw the cat on the news, they knew it had to be their cat Tiger. Slater confirmed that Q does, in fact, respond to the name Tiger!

Tiger’s owners, Brent and Lynnette Hain, are now traveling to reunite with their miracle kitty. Slater became very close with the cat, so hopefully his owners will be okay with Slater visiting him!