People often count on dogs to guard their house and home, but an attempted home invasion story coming out of Florida suggests homeowners shouldn’t immediately discount the family cat.

When a Sarasota, Florida, heard a knock at their front door, they correctly assumed an unwanted solicitor was knocking. But when the family peeked to see who it was, they were startled to find a large alligator with his body pressed up against the glass front door, trying to wrestle his way inside. 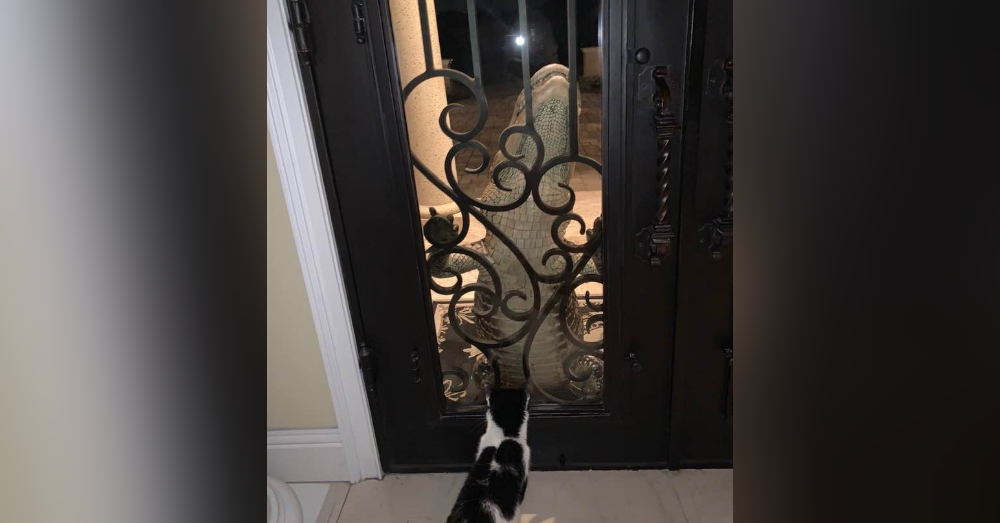 Even in Florida, where gator sightings are relatively common, it’s unusual to find an alligator trying to break into your house. But the family cat appeared completely unruffled by this surprising development. In fact, as the gator continued to bang against the door, the cat just coolly stared at this unwanted visitor, as if just daring him to come any closer.

Fortunately, the family took a picture of this unflappable cat and sent it to friends who posted this incredible scene on Facebook. “We have friends in Sarasota FL that heard noise at their front door,” Ed Werdell wrote on Facebook, where the photo quickly went viral. “Take a look at what they found!!! Wow!”

We have friends in Sarasota FL that heard noise at their front door. Take a look at what they found!!! Wow!

Commenters were quick to note that the family cat seemed to have this attempted home invasion handled. “So lucky they have an attack cat at the ready!! #floridalife,” one user wrote. “Cats is like that’s all you got? Lol move it along monster man,” another user joked. “Brave cat! I would have dropped dead,” another user wrote.

But others noted that such an alligator sighting made them wary of visiting or moving to the Sunshine State, guard cats or no. Florida folks: have you ever seen an alligator up close like this? How did your cat or dog react?