Wife Wanted A Cat. Husband Wanted A Dog. They Settled On A Cat Who Plays Fetch.

A trending video is using the family cat to remind us of a couple of life’s truisms. First, compromise is key to any good marriage. Second, some cats, including the frisky feline below, can play fetch better than some dogs!

“My wife wanted a cat. I wanted a dog. So now we have a cat that plays fetch,” user u/hbouwers wrote on Reddit. The caption is accompanied by an adorable video of the poster’s black-and-white catch gleefully fetching the ball for his or her owner.

My wife wanted a cat. I wanted a dog. So now we have a cat that plays fetch. from aww

Cats aren’t known for playing fetch like dogs do, but it isn’t unheard of for some cats, especially kittens and felines with Siamese heritage, to enjoy this classic game of retrieval. After all, these famous hunters love to chase mice and birds, and often proudly present them to their owners. The biggest issue, as some commenters duly noted, is getting your cat to regularly commit to the rules of the game. 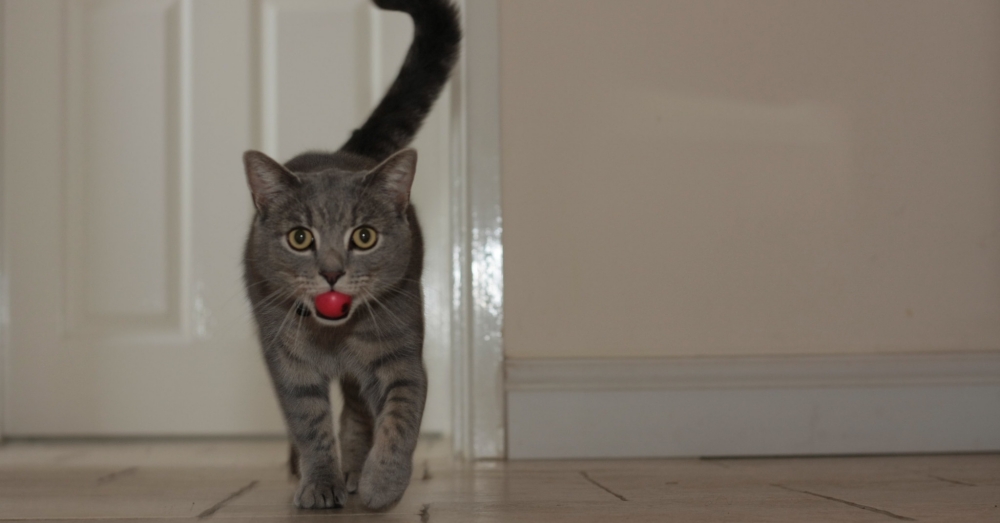 But although felines aren’t as easily trained as their canine counterparts, it’s still possible to teach cats a cool trick or two. For instance, GreaterGood and The Animal Rescue Site have teamed up with Jackson Galaxy to develop Cat Pawsitive, a signature program that teaches shelter cats how to give humans high fives. But this GreaterGood signature program is much more than just some cool party trick. This simple skill helps shelter cats build confidence and bond with potential adopters, thereby increasing their chances of finding good homes. (Find out more about Cat Pawsitive, which was also developed in partnership with Petco, here.)

Regardless, if we can teach shelter cats how to high-five, we bet you can teach your cat (ideally when they’re young) to play fetch. The key will be finding a way to encourage them to bring back the ball on a regular basis, perhaps with a clicker or some other positive reinforcement training. Playing fetch with your feline can also keep your kitty in peak mental and physical shape. After all, indoor cats have a tendency to put on extra pounds, so playing fetch can keep them entertained and help them maintain a healthy weight.

Can your cat do any tricks? Tell us about them in the comments!