Photo Of Pet Has The Internet Divided: Is This A Cat Or A Dog?

Nature is always throwing us curve balls that continue to confuse both scientists, and more recently, the internet. Whether it’s a crow that looks like a gorilla, or a dog and baby howling out an argument, animals continue to surprise us with the behavior and sometimes, their appearance. One such surprising appearance is an animal from Quebec in Canada, who sent the internet into a wild debate with their appearance.

It began when a Twitter user named n2o uploaded a photo of a very furry animal with loads of crazy gray and white fur, long whiskers, piercing amber eyes, and big ears. There was no explanation as to what animal it could be.

So naturally, thousands of people that read the post shared it, thus launching a very intense debate about the species of the animal. 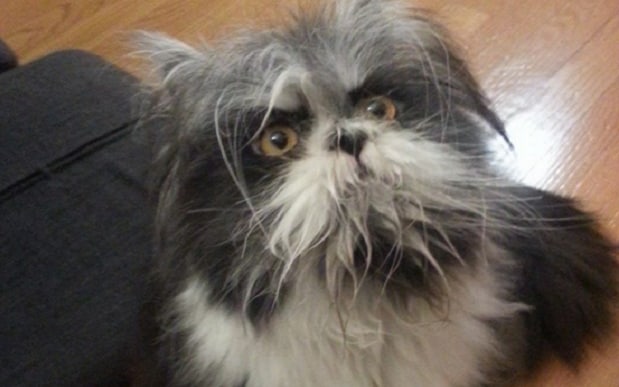 Some people thought perhaps it was a unique type of small dogs, such as some kind of terrier or Lhasa Apso. Still, others believed that it was perhaps one of the long-haired cat breeds, like a Persian or Norwegian Forest Cat.

The arguments went back and forth until the animal was finally revealed to be Atchoum. This special pet actually has his own website which acknowledges his unique appearance can sometimes cause.

“I’m hairy, not scary,” his website states, “Some people say my wild furs and intense amber eyes make me look like a dog, an owl, a mad scientist, a Gremlin, Lorax or the Grinch but I’m happy to be me.”

The truth about Atchoum was finally revealed after a news outlet did a story on him. Apparently, little Atchoum is a feline, but has a special condition known as “hypertrichosis.” The name is Greek in origin, and means “overly hairy” and the condition is sometimes referred to as werewolf syndrome. While Atchoum might look like a little werewolf, he in fact isn’t. He’s a Persian cat, whose French name happens to mean Sneezy, like in the Seven Dwarves. His human owner told Catster, “I chose the name because when you sneeze hard it messes up hair, like Atchoum’s.”

Nathalie Côté, Atchoum’s rescue mother, works as a professional pet groomer, so he gets the best beauty care any cat could ask for. She said to Catster, “I’m cleaning and grooming his eyes and nose two times a day, and I brush him twice a week.”

Atchoum is the regular subject of the local artists who like to paint and draw him. Atchoum has even inspired a unique fashion line by a company called Catso, which makes ties and bowties for both cats and dogs. This Canadian cat has become a world celebrity, with many internet users in awe of his distinct appearance, which at times can even appear owl-like.

Atchoum has a social media presence that is rising in popularity across different platforms. He has even been featured in a kid’s book alongside fellow Canadian cat celebrity Oreo – a fluffy black-and-white cat from Saint-Zotique in Quebec – who is also famous for his fluffy hair and dapper style of fashion.

The two cats appear in Atchoum & Oreo: First Day of School, where they tackle important issues having to do with bullying. Oreo’s owner, Linda Modugno, is an illustrator, so she and Nathalie came together to collaborate on the book in order to make it extra special for readers.

Even though the truth is out that Atchoum is actually a cat, there are still people out there who don’t believe the feline is actually a feline. But that doesn’t seem to bother Atchoum. The cat’s website states, “Life is good. I feel good and I believe we need to enjoy every day.”

Such wise words from a wise-looking feline.