He Saw A Cat Drowning In A River, Then Threw Him A Life-Preserver In Hopes Of Saving His Life

A cat found himself struggling to stay afloat in Dublin’s River Liffey last week. The majority of cats dislike water, so this little guy was probably less than thrilled to be in this awful predicament.

Thankfully, people spotted the cat and acted quickly to save him. They came up with the brilliant idea to throw down a life-preserver, not knowing if it would work. Luckily, the desperate kitty was smart enough to climb up onto the life-preserver.

They slowly and carefully lifted the life-preserver up out of the water and up the high wall, while the cat held on tight. He was successfully brought to safety, while a crowd of onlookers applauded.

Another video was taken by someone who was watching from across the lake, which gives a better view of the rescue.

“I walked over the bridge and around the other side of the river only to see a man drop down a life ring with some adaption,” says that video’s caption. “I could just make out an animal, which turned out to be a cat. The cat [grabbed] onto the ring and was slowly hoisted up as the view crowd became hushed. Once pulled out the man raises up the cat to raptures of applauses.”

Apparently this wasn’t the first time a cat has made its way into the River Liffey. The Dublin SPCA posted a photo of a wet cat after he had been rescued in March. 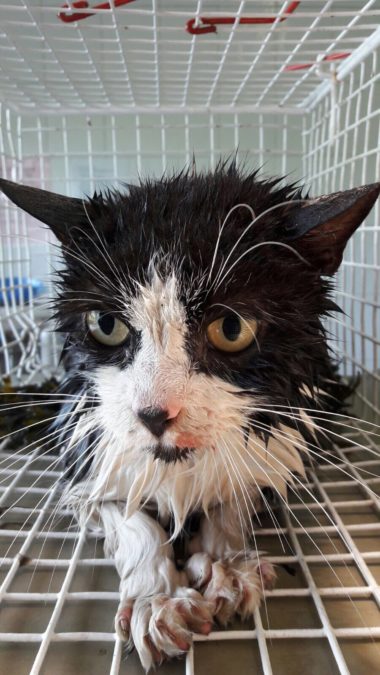