Daisy, a nine-year-old cat, was outside playing on her neighbor’s driveway when she decided to be a little mischievous. She made her way inside the neighbor’s van, but then wound up getting wedged in the exhaust. She wound up being stuck there for 12 hours.

They tried to lure her out with food, but she was unable to make it out on her own. That’s when they drove to an auto shop down the road to get help. The cat’s owner and the mechanics were not sure if the cat had made it through the night. 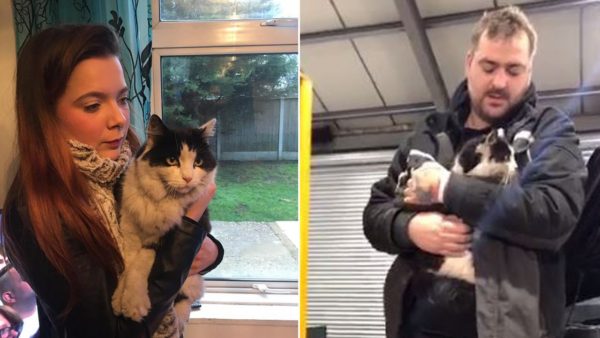 But when they realized she was still alive, they knew they had to act quickly to get her out. The rescue wouldn’t be an easy one, but mechanics had to take the car apart in order to get to her.

Thankfully, they managed to get the cat out safely. She was very shaken up and there was a lot of fur in the engine, but she was unharmed. She is now back with her owner and is just fine, acting like nothing ever happened! What a brave kitty! Hopefully next time she will be more careful and know better not to crawl into dangerous places! Watch the rescue in the video below: