We often hear about those doppelgängers that are out there and look just like us.

It seems as if one cat owner, Jenny Salzer, found a statue that looked just like Cosmo, her lovely black cat.

She found the statue at Goodwill and brought it home to put on the front porch. She then promptly forgot about the statue until she was out with Cosmo one day and he started rubbing his face all over it.

It wasn’t long before Jenny said that Cosmo was in love with the new visitor.

According to The Dodo, Jenny said “He loves to play! He also likes to cuddle and make biscuits on anything fuzzy.”

It seemed as if Cosmo was breaking his own rule, thanks to the addition of the new statue. Since that humble beginning, Cosmo has grown closer to the statue and sometimes, Jenny will even see her beloved cat giving the statue a big hug. 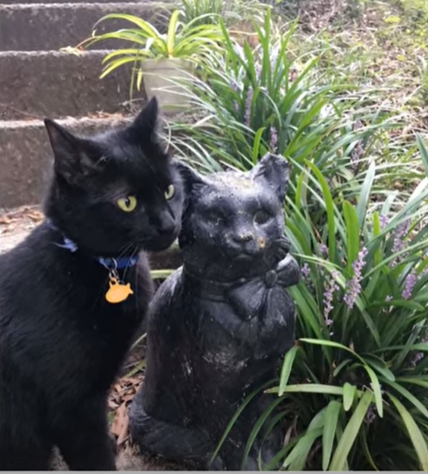 She said that he normally likes the statue but now she wouldn’t live without it.

Since Cosmo is typically an indoor cat, he has a limited amount of time to spend with his friend out front. Any time that Cosmo gets to go outside, his statue friend will be sitting there, waiting faithfully.

Jenny isn’t sure if Cosmo sees himself in the statue or if he just is thankful for a playmate. These days, Cosmo seems to be a little needier, both with Jenny and with the cat.

I guess we all need a friend these days during lockdown.