It was February in New York City when a 12-year-old carriage horse named Aisha collapsed in Central Park.

Aisha struggled to stand for at least 15 minutes before crumpling on the side of the road.

Nearby, people recorded the incident on their phones.

This carriage horse from Clinton Park Stables is seen stumbling and unable to straighten their back legs in Central Park earlier today.

After years of doing nothing for carriage horses, will @NYCCouncil finally protect them? cc: @CoreyinNYC pic.twitter.com/EzSgvxoCkb

When a trailer arrived to retrieve Aisha, carriage drivers pushed the horse inside. She was taken away and euthanized later that day.

Aisha was one of about 220 horses registered to pull carriages in New York—but her death is symptomatic of a much more insidious, even raising the interests of  New York’s Animal Cruelty Investigation Squad.

💔This brutal video shows carriage drivers purposely blowing smoke into downed carriage horse Aisha’s face and her flipping over in terror. There is 17 minutes more of footage like this. Aisha was brutalized. Now she’s dead. Animal cruelty charges need to be filed. @NYPDPaws pic.twitter.com/JZhsWuQ4ML

Aisha’s death was followed by the deaths of two more horses in 2020, both horses euthanized after contracting colic, the New York Times reports. 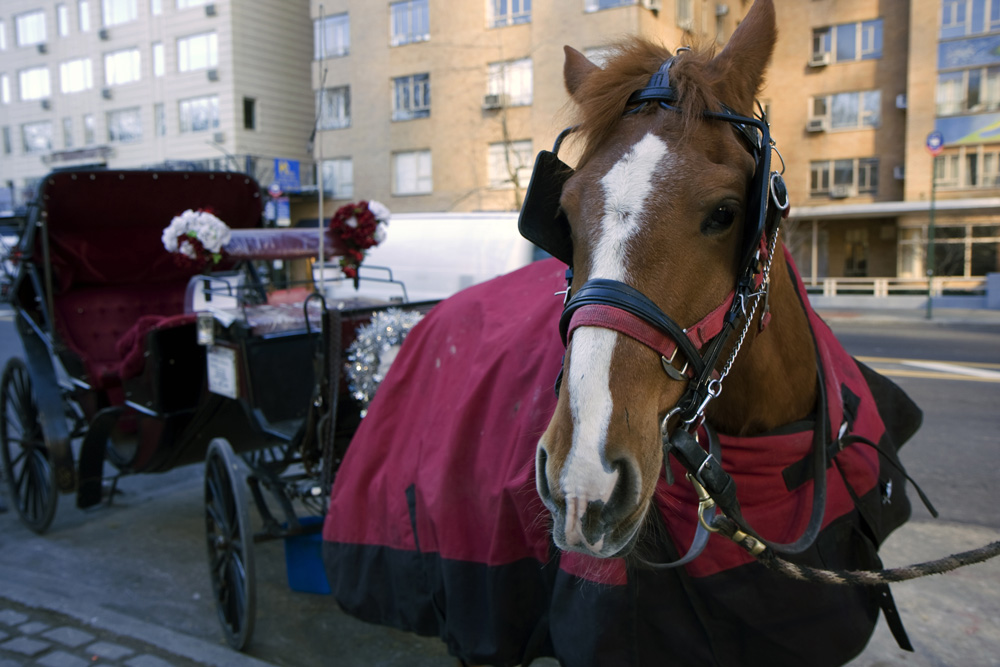 NYCLASS’s executive director, Edita Birnkrant told the New York Times that Aisha’s death was representative of what she called a low standard of care for the city’s carriage horses.

“Just like anyone else, any other living being having a medical emergency, whether they live or die, depends on the care given immediately after,” Birnkrant said. “There was not a qualified vet on the scene; there were unqualified people trying to get her into a trailer.” 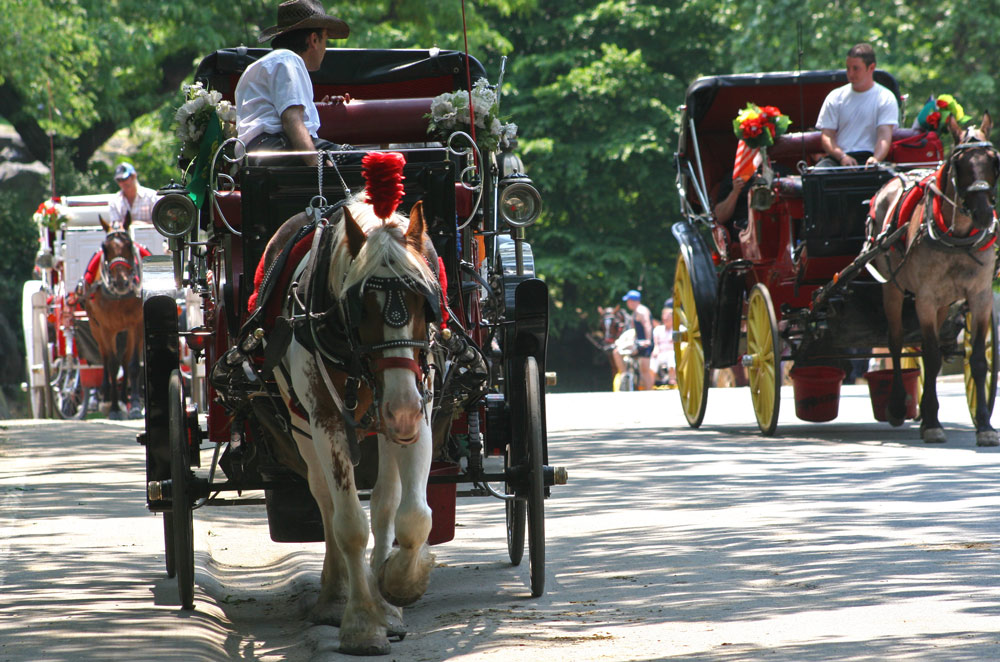 Source: Adobe Stock/Stephen Baxter
When horses become too old or injured for the job, they may be euthanized or sent to a slaughterhouse.

According to New York Department of Health records obtained and compiled by nonprofit group the Coalition for NY Animals, between 2005 and 2013, 529 carriage horses, an average of 71 per year, were removed from the city registrar’s rolls.

According to NYCLASS (New Yorkers for Clean, Livable, and Safe Streets) a 501(c)(4) non-profit animal rights organization founded in 2008 on the core mission of saving NYC carriage horses, enacting animal rights legislation into law, and electing pro-animal candidates to office, summers in New York City are often marked with death and tragedy every year that carriage horses are forced to work. 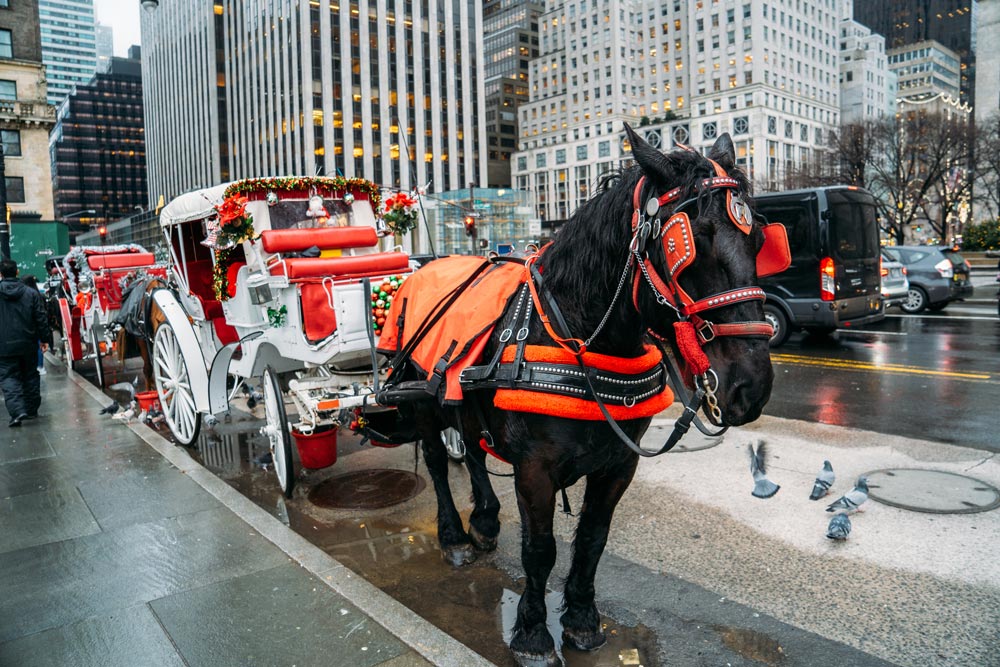 Source: Adobe Stock/ManuPadilla
Horses can become overheated while working in the summer.

Very few know where the horses end up, but there is growing evidence that the elderly and inform are sent to slaughterhouses.

“After they work the busy and unsafe streets of NYC, the carriage horses are often sold to auctions in Pennsylvania where they can be – and are – sold to kill-buyers who transport the animals to Mexico or Canada to be brutally slaughtered for exported meat,” NYCLASS reports.

The harsh reality of the life of a carriage horse working in New York City is that horses simply are not meant to work in dangerous midtown traffic. 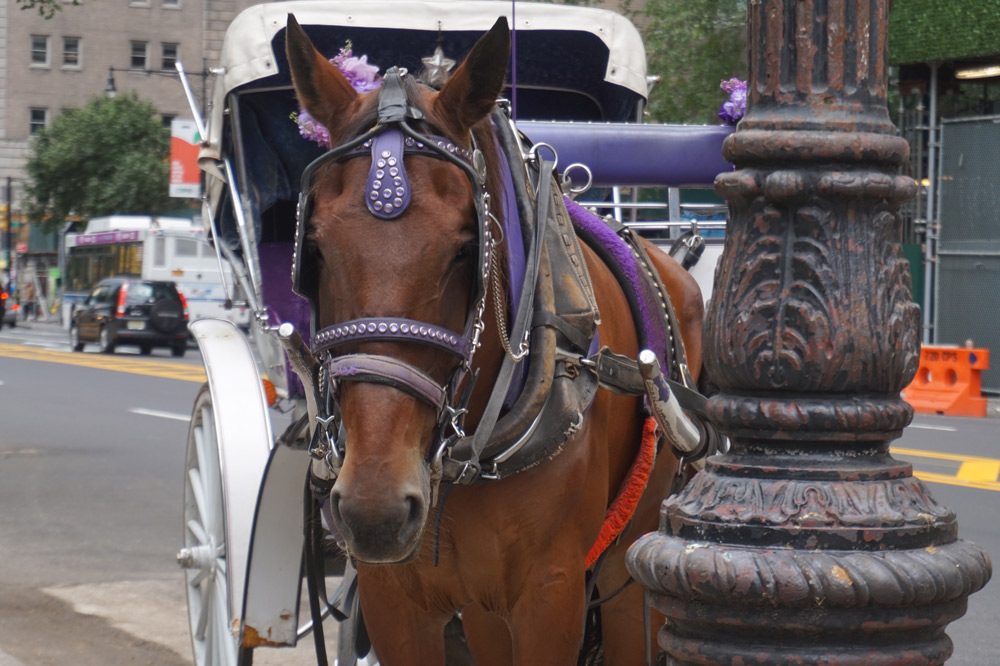 Source: Adobe Stock/Edymar
Horses can be spooked easily by vehicles or pedestrians.

Life for a carriage horse involves nine-hour workdays, seven days a week, pulling a vehicle that weighs hundreds of pounds on hard pavement while breathing exhaust from cars, buses and taxis. These horses can be “spooked” by vehicles or passersby, leading to accidents that cause even more damage to people, property and the horses themselves.

At the end of the day the horses head back home to stables in Hell’s Kitchen by the Lincoln Tunnel and the busy West Side Highway. They go weeks without any pasture time to graze, roll and socialize freely on grass, which equine veterinarians agree is needed daily for horses to live healthy lives. 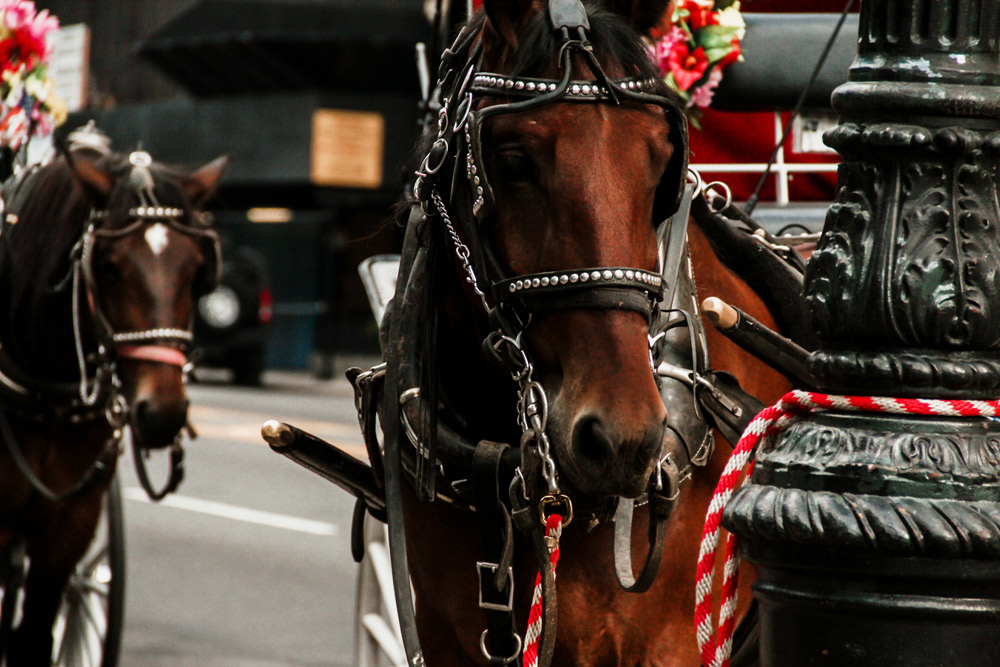 According to Encyclopedia Brittanica, the average working life of a New York City carriage horse is four years, as compared to 15 years for horses in the New York City Police Department’s mounted patrol.

“ASPCA inspections since the 1980s have indicated that hoof and joint injuries, resulting from long hours walking on hard concrete, are pervasive, and that colic and other illnesses, brought about by bad or insufficient food, also are common,” Brittanica reports. “In 1989, a veterinary consultant for the ASPCA inspected the city’s six carriage-horse stables and examined horses in the field. She found, among other things, that the majority of horses were housed in unsafe and unhealthy conditions, that most stables were firetraps, that horses were confined to narrow stalls and had no opportunity to exercise, that the stalls were not ventilated or even cleaned, that horses in the field rarely had access to water, that many horses were filthy and underfed, that many suffered injuries created or exacerbated by long hours of walking on hard concrete (some horses worked 70 hours per week), and that carriage drivers were typically ignorant of basic facts about equine health and even harnessing.”

No animal deserves this fate, let alone majestic and intelligent horses. Click the button below to sign the petition calling for an end to the carriage horse industry in New York City.

Save the Carriage Horses in New York City! Life for a carriage horse involves nine-hour workdays, seven days a week, pulling a vehicle that weighs hundreds of pounds on hard pavement while breathing exhaust from cars, buses and taxis.

When the horses become old and sore from years of working, they are often sent to slaughterhouses.