‘That Does Not Sound Like A Horse Who Tripped’: Carriage Horses Face Cruel Treatment

When I was a little girl, I used to walk around Central Park with my dad. We had our own special spots we would go to and eat a picnic lunch. Of course, as each horse and buggy went by, I would totally freak out and beg my father to take me for a ride.

He always said… no.

I wasn’t one to throw a temper tantrum but it really upset me. Why were other little girls entitled to this and not me? Well, that was because my dad understood that the horses were unhappy. At least he felt they were unhappy. He knew that they wore blinders so traffic and bicyclists didn’t spook them. He understood that they were forced to work for hours, sometimes in grueling temperatures, without enough water. And he would NOT support this. 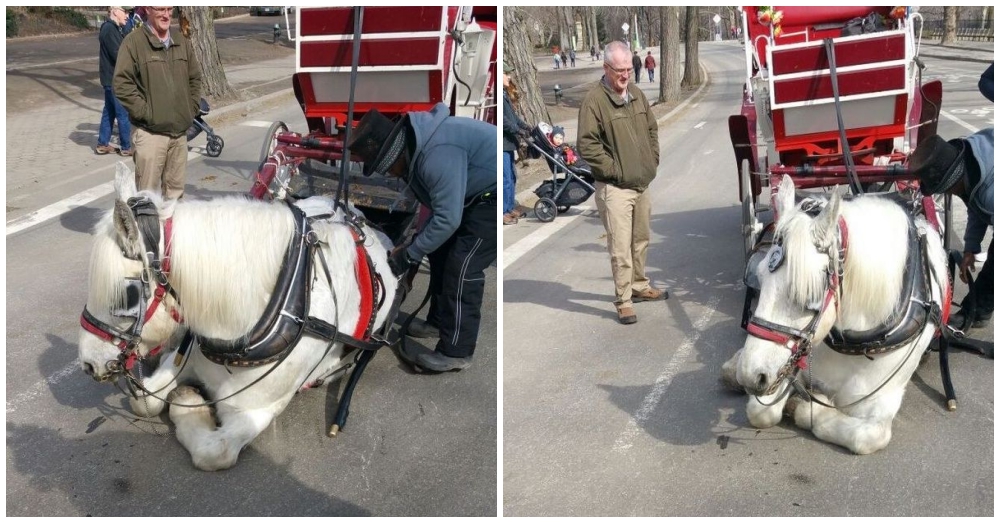 So, of course, when this story made its rounds, I just had to write about it.

The accounts vary from driver to passerby but let’s just say I’m a bit biased.

Early one morning, a carriage horse named Max collapsed to the ground. The driver insists he tripped, but the citizen who snapped a picture said that the horse was breathing heavily before he “fell” to the ground.

NYCLASS, an advocacy group that speaks out for horses like Max, got ahold of this picture and it went viral. Chris Emanus, the driver, insisted:

“He tripped,” Emanus told Daily News New York. “His foot got stuck on a little crack on the pavement. He went down. That happens all the time with horses. With new shoes, sometimes they’re not comfortable.” 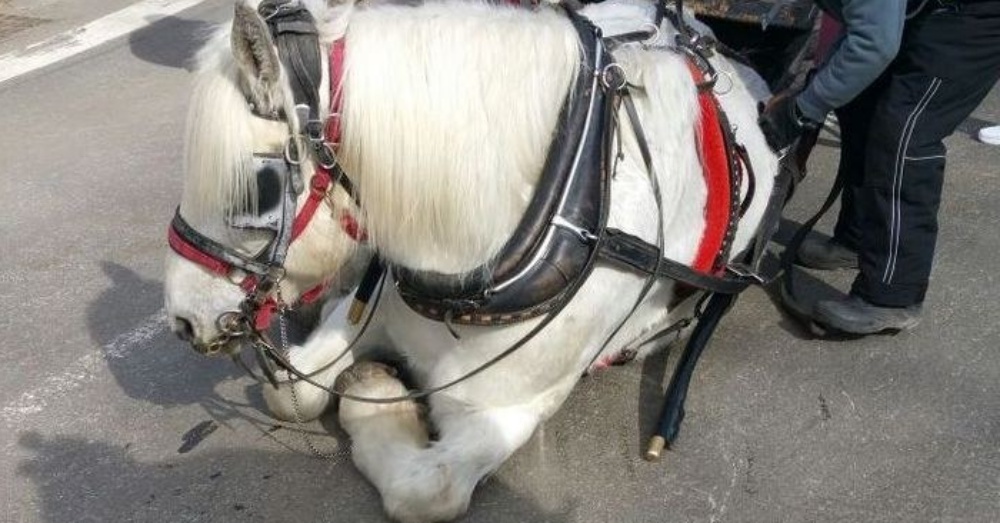 But Jill Carnegie, a spokesperson for NYCLASS isn’t buying it.

“What we do know based on the witness account was that this horse was breathing heavily, and then collapsed to his side, took a few moments to right himself, took a few steps, then collapsed a second time,” Carnegie told The Dodo “So that does not sound like a horse who tripped.”

This is certainly not the first time something like this has happened. NYCLASS reports that carriage horses work 9 hour days on asphalt with uncomfortable bridles and bits in their mouths, with loud traffic around them. It’s not exactly an ideal setting for any animal. To say it’s cruel, I would say, is an understatement.

If you see anything like this go down, Carnegie from NYCLASS insists to call 911. In an article by The Dodo: “That 911 call then is tracked and recorded, and, if the police think it’s appropriate, they can file a report,” Carnegie said. “That’s why it’s so crucial to call someone when this happens — otherwise, no one knows. And the industry is certainly not going to compromise itself by revealing what’s going on.”

Now that I have kids of my own and we visit Central Park, it is my turn to tell them we are NOT going to go for a horse and carriage ride. Sorry kids.