This Lab’s Job Is To Befriend His Natural Enemy…The Relationship That Develops Is Amazing!

This yellow lab has the best job in the world! His job is to befriend cheetahs at the Columbus Zoo in Ohio despite the fact that a positive relationship between these two species is considered to be highly unlikely. In Africa, cheetahs are considered to be the enemy of the dog. People use dogs as guards against cheetahs who have a habit of attacking livestock. But that little bit of stigma doesn’t stop this yellow lab, Carlyle from befriending the cheetahs at the zoo.

When Suzi, a director at the Columbus Zoo, received a call about adopting 4 cheetah cubs she jumped at the chance. She knew that cheetahs are skittish by nature and the cubs would need a friend to help them out. Her solution? Get a puppy and raise them together! So Suzi went in search of a breeder. When she found one, it was not smooth sailing. The breeder wanted to give Suzi a different puppy instead of Carlyle, but Suzi was persistent. She wanted Carlyle and refused to take no for an answer. So with a bit of begging, the breeder caved and made the decision to give Carlyle up. And good thing too! Carlyle became an amazing addition to this little family of 4 cubs. 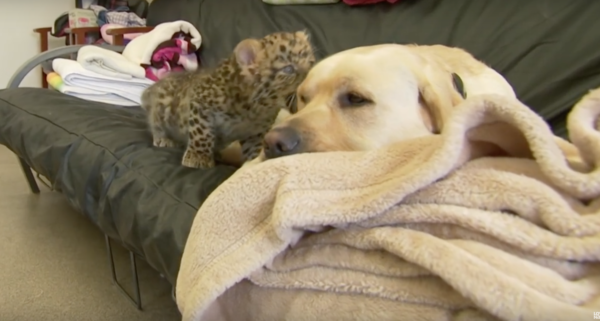 Carlyle was such a loving and accepting dog that it was easy to integrate him into the daily life of the cheetah cubs. Being raised together yielded fantastic results! The cubs and Carlyle developed a sense of brotherhood that you would definitely not see in the wild. And Carlyle’s purpose is more than just playing with his brothers. He is able to act as a calming influence on the cheetahs, especially for when they have to travel.