California is experiencing its largest wildfire season in history. Since the beginning of the year, there have been over 8,300 wildfires that have burned over 4 million acres. Rescue teams are searching the scorched areas for survivors, including wild animals.

California Department of Fish and Wildlife (CDFW) Lt. Barry Ceccone found a black bear near North Complex fire that was severely burned and unable to stand. The 370-pound bear was sedated and transported back to Wildlife Investigations Laboratory (WIL). 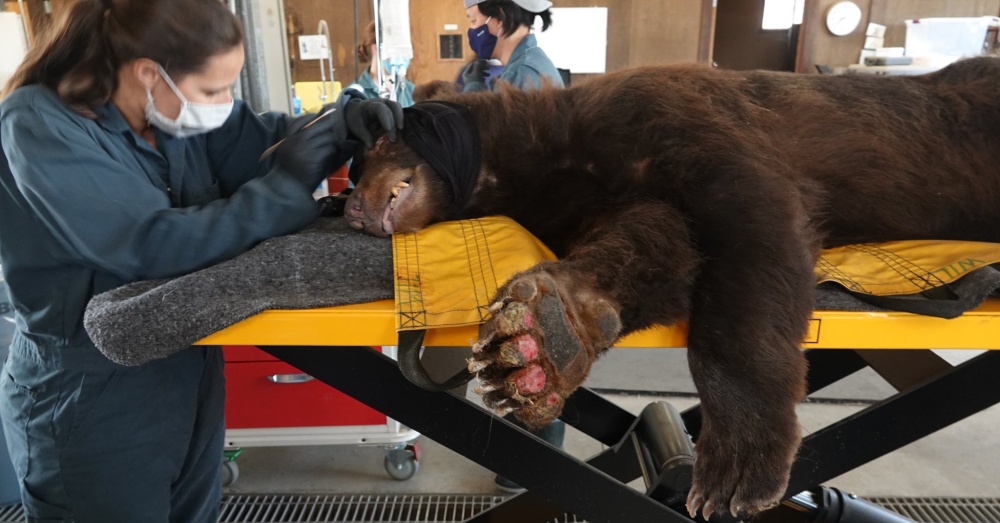 “When we found him, he couldn’t walk. He was crawling,” Dr. Jamie Peyton, veterinarian at the University of California, Davis campus, told Reuters. “But what’s amazing is we can take that animal and in a couple of weeks literally get him back on his feet again.” 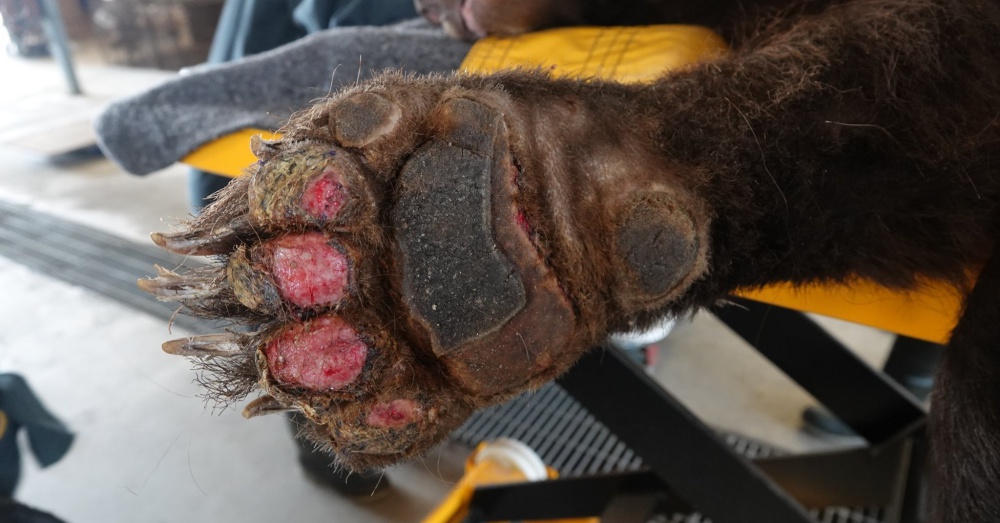 Staff veterinarians examined the bear named Barry, after his rescuer, and noted that all four of his sensitive pads on his paws were burned. In addition, the bear suffered from smoke inhalation and a minor eye injury. Under the direction of Dr. Peyton, Barry was given pain meds and after carefully cleaning the burned paw pads, a “specially formulated anti-inflammatory/pain salve” was applied to the burns and then sutured with tilapia skins. 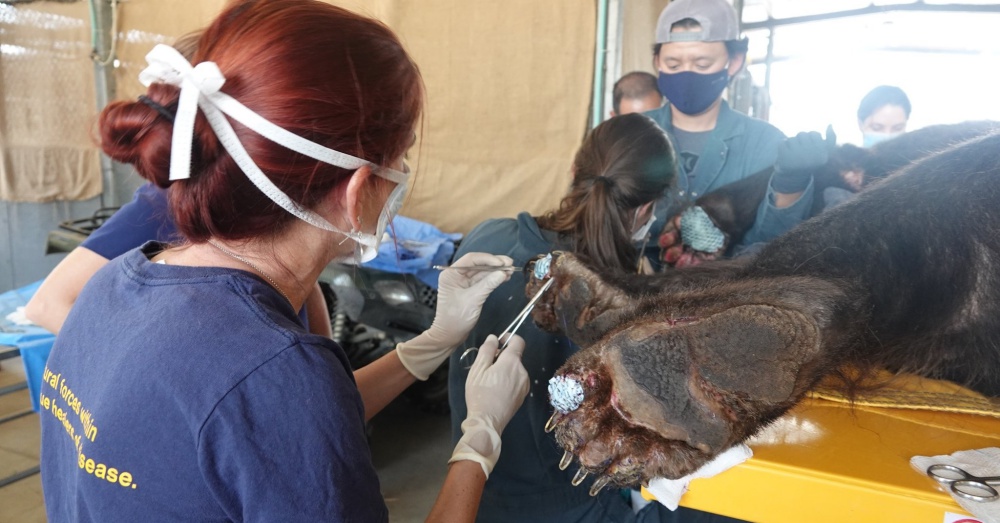 The staff continued to treat and monitor Barry but with as little human interaction as possible, so he could return to the wild. “The bear was kept in a quiet enclosure with 3-7 days between treatments. WIL staff monitored him around the clock, using remote cameras (it is important to keep human interaction with rehabilitating wild animals to a minimum, in order to keep them from becoming habituated),” posted CDFW.

Barry had a healthy appetite and gained some much-needed weight before the vets decided he was ready to be released back in the wild. 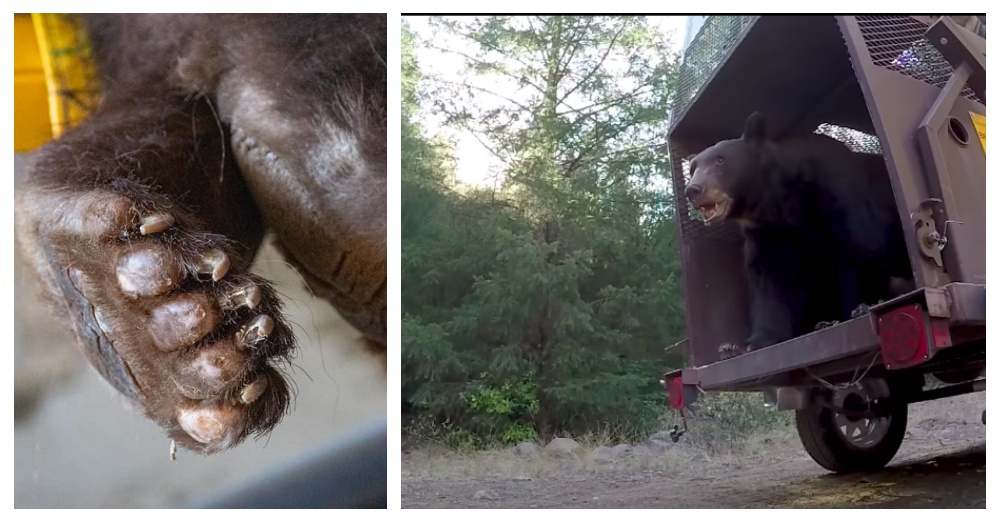 The bear was transported to a safe area away from wildfires and humans, about 25 miles from where he was found, that is full of food, water, and shelter. “When the holding pen was opened, the bear wasted no time in dashing back off into the wilderness,” wrote CDFW.

Barry is the first of many wild animals to arrive at WIL with severe burns. Another bear and a female mountain lion are on the mend after their paws were also badly burned in wildfires. Staff report they are doing well and should be released in the wild in a few weeks. 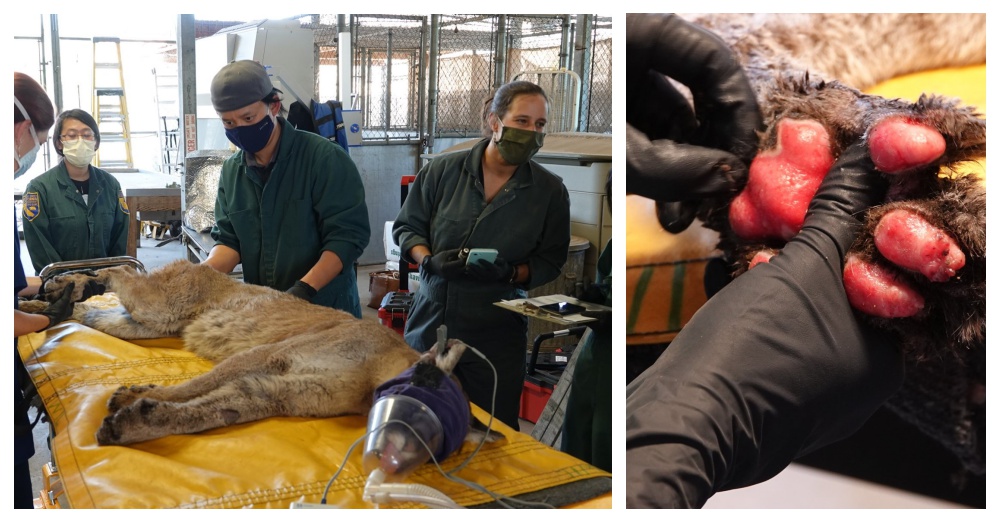 As more wild animals are expected to arrive in need of rehabilitation, CDFW announced, “CDFW and the UC Davis School of Veterinary Medicine are partnering to create the Wildlife Disaster Network, which provides a formal framework for wildlife search and rescue, field triage, transport and a long-term rehabilitation care system for injured wildlife resulting from wildfires.” 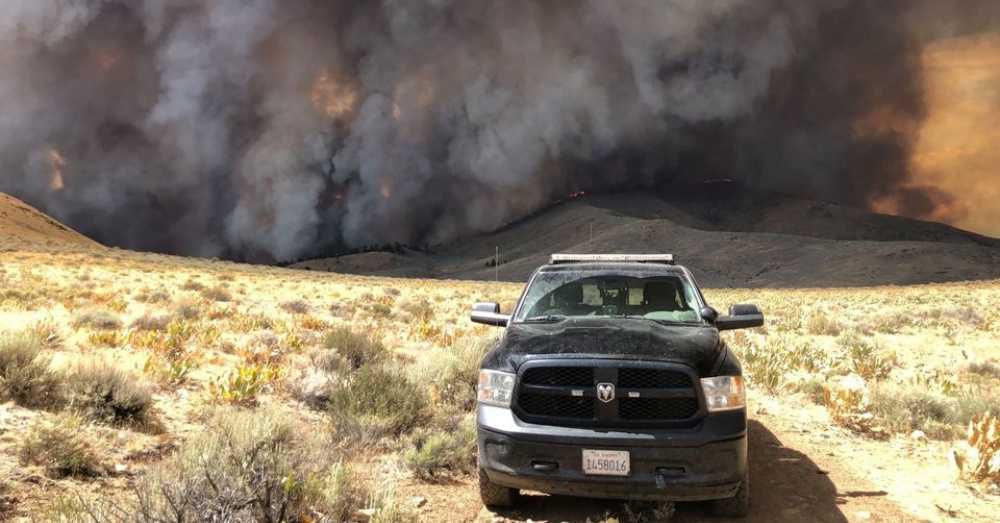 Locals are excited by the news and are offering to help in the search and rescue. The CDFW thanks people for their eagerness to help but said they will post on social media if and when volunteers are needed.

Watch Barry run into the woods once he is released in the video below.

Starving Newborn Baby Deer Runs Up To Woman And Starts Sucking On Her Leg: Click “Next” below!

These ‘Rubbish’ Pet Portraits Raised Nearly $6,500 To Help The Homeless