Bullfighting is quite easy to define. On one side of the ring is a magnificent creature, as beautiful as it is strong. On the other, a man hiding behind a sheet prepared to kill the animal for the sake of selling tickets to the next massacre.

Corrida de toros, as it’s called in the Spanish-speaking countries that host the bloody events, was a cruel and outdated sport before it was even brought into fashion. This inhumane form of entertainment poses a “brave” matador against a bull and culminates in the animal’s drawn-out and torturous death from multiple stab wounds to the torso, and a dagger twisted into the skull.

According to stopbullfighting.org, an activist organization that collects information and raises awareness of bullfighting issues, while the bulls may seem quite vicious in the ring, they are anything but.

“The bull has wet newspapers stuffed into his ears; vaseline is rubbed into his eyes to blur his vision; cotton is stuffed up his nostrils to cut off his respiration and a needle is stuck into his genitals,” the nonprofit site maintains. 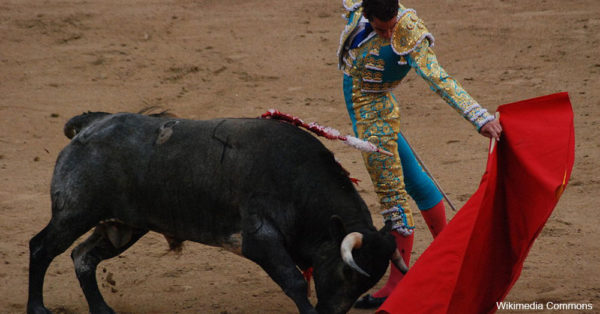 In fact, bulls aren’t temperamental deadly beasts outside of the ring, either.

As zoologist Jordi Casamitjana told HSI, bulls are “very peaceful animals that spend most of their live[s] eating grass, sleeping and playing with each other.”

In France and Portugal, as the League Against Cruel Sports reports, “bloodless bullfights” are promoted as a more compassionate version of the event, although it still leaves the bulls mentally and physically exhausted and all the more wary of human interaction. 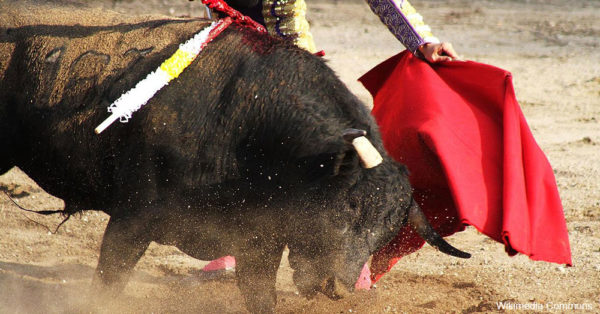 The antagonized bull is stabbed repeatedly in the back with knives.

Deaths and several life-threatening injuries to matadors in recent years, along with the realization that bullfighting events are a drain on public funds and a gross promotion of cruelty, have contributed to the sport’s growing unpopularity in European countries.

“Ángeles González-Sinde, former-minister of culture (2009-11) for the socialist PSOE, told me that young people who came of age in the early 1980s, in the aftermath of Franco’s death, often enjoyed going to watch the bulls, and that there was a strong admiration and affiliation with certain leading toreros who mixed with leading lights of La Movida, the drug-fuelled youth movement that put Pedro Almodóvar and his adopted city of Madrid on the international map,” the Guardian’s Duncan Wheeler wrote. “She believes this connection has been lost, and that teenagers now see bullfighting as something alien to their increasingly globalised culture.”

According to Time, After Spanish Matador Victor Barrio was killed in the ring during a live broadcast, video of his gruesome death went viral. So did the backlash against Barrio’s wife, after she took to Twitter to defend her late husband’s bravery.

When a matador kills a bull, the stadium cheers. When a bull kills a matador, both the victor and its mother are put to death. There is no positive outcome for a bull relegated to the fighting ring. 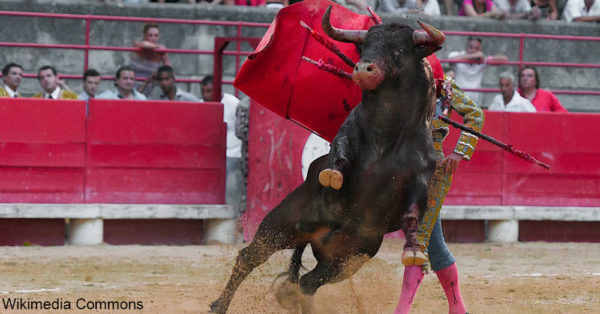 “It is the 21st century and unthinkable that a spectacle where someone mistreats and kills an animal is officially a cultural event,” Chesús Yuste, spokesperson for the Parliamentary Association in Defense of Animals (APDDA) told Time. “The time for bullfighting has passed.”

FLAC Anticorrida, the French-based Federation of Associations Fighting for the Abolition of Bullfighting, has put forth a compelling and graphic promotion, arguing that bullfighting belongs to an antiquated and obsolete age. Yet the government-subsidized slaughter continues.

Due to its graphic content, those with objections to violence and blood may want to avoid the following video, although its message is without a doubt poignant and apropos of the situation bulls face in every match.

Humane Society International reports that around 250,000 bulls are killed in bullfights every year in Spain, France, Portugal, Mexico, Colombia, Venezuela, Peru, and Ecuador. As attitudes toward the practice continue to grow sour, some cities in Spain and Mexico have stood up for bulls and outlawed bullfighting regionally.

Other efforts to end bullfighting throughout the world are also in progress. There is hope that many will see this cruel practice abolished in their own lifetime, and compassion and dignity will be restored to the magnificent animals who have been massacred for so long. Click the link below to add your name to a growing list of individuals who have also spoken out against bullfighting.

Running With Or Fighting Bulls For ‘Sport’ Is Anything But

Protecting bullfighting as a cultural heritage practice is effectively handing over a death sentence to hundreds of thousands of bulls every year, and a testament to blatant animal cruelty.
Ban bullfighting and running with the bulls worldwide. This bloody spectacle needs to be put behind us!
Make a difference!