Back in 2009, Teresa Haugen noticed a fluffy white cat occasionally wander through her yard. The feline, which was wearing a flea collar, didn’t initially appear to be homeless, but as he grew scruffier and thinner, Teresa started leaving food and water outside.

One day, her son’s friend told Teresa the mysterious cat belonged to a neighbor who had recently moved away. Such “owner surrenders” account for a significant percentage of dogs and cats living in U.S. shelters, but this poor cat’s former family hadn’t even bothered to find their pet a new home. 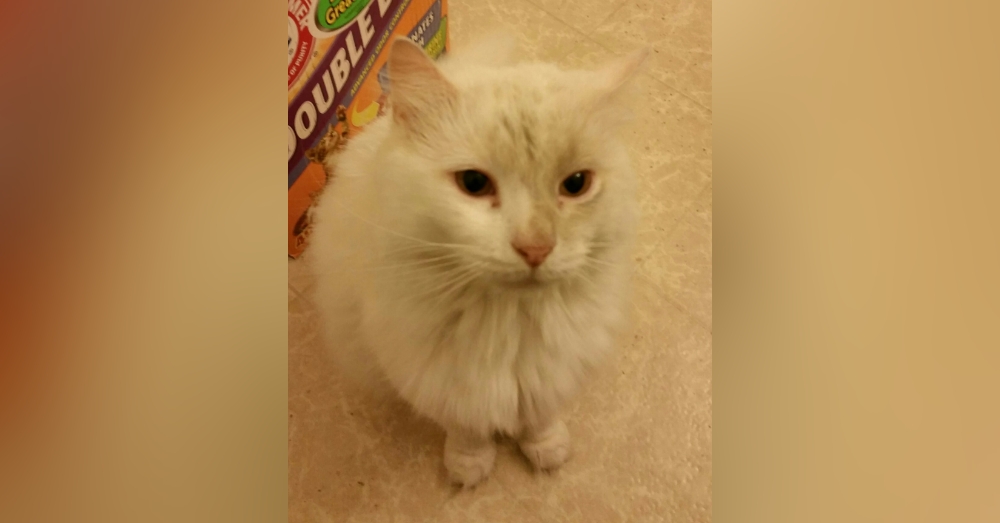 For the next 18 months, Teresa left the cat food and water on the landing of her apartment building, although the scared, skittish animal otherwise kept his distance. One evening, he came to receive his meal with a large puncture wound in his head, which was also very swollen.

“I was very worried about this because I couldn’t catch him to get him the vet,” Teresa explained to The Animal Rescue Site. Instead, she asked God to “please let him heal up with no complications, and he did.” 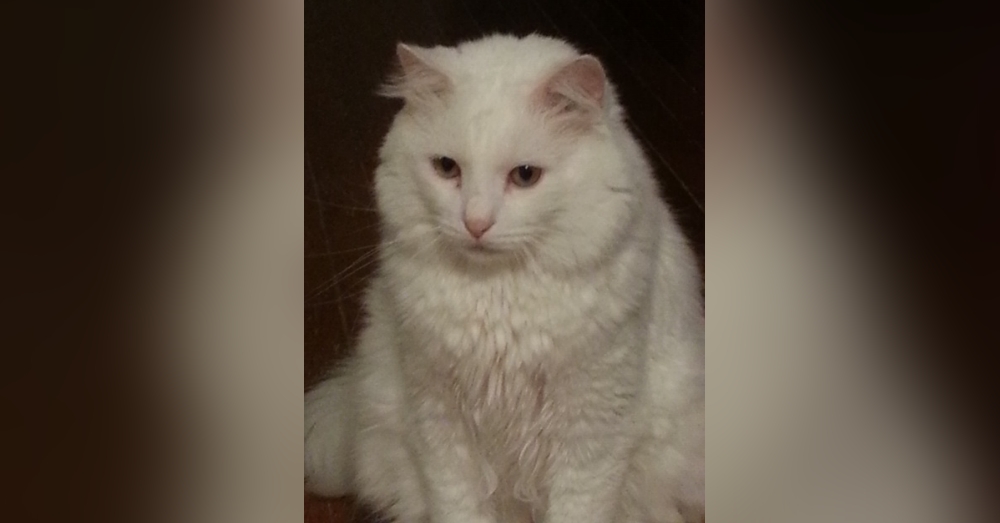 In time, Teresa and the four-legged vagrant fell into a routine. “Every night, I would sit out on the landing and talk to him, even though he wouldn’t come near me,” she recalls. Even so, the animal gradually adjusted to her presence. Sometimes, he would even fall asleep.

Regardless, the cat’s wanting health nagged at Teresa, who hoped the animal would eventually trust her enough to accept help. “He was so beat up, battered and dirty… and getting thinner and thinner all the time, despite all the food,” she remembers.

Finally, more than 15 months after the pair first met, that day arrived. 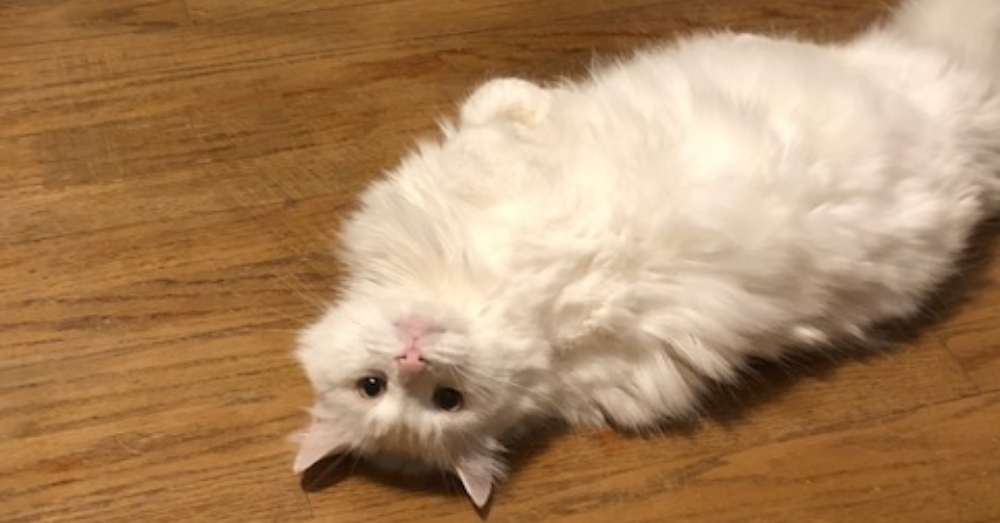 Teresa was outside on the apartment landing when the cat just walked up and looked at her. “I called to him and said, ‘come on, buddy, I promise I won’t hurt you.’ To my great surprise, he came up to where I was sitting and head butted my leg,” she remembers. And this time, the cat didn’t run when Teresa reached down to pet him. 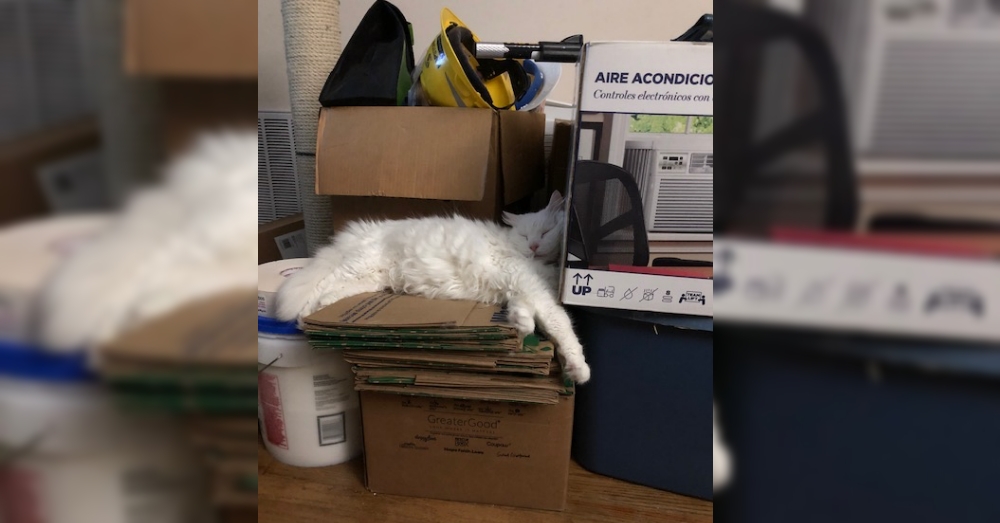 From that moment on, Teresa made it her mission to get the cat inside, especially because she was also about to move.

“I was in the process of buying a house and I was determined he was coming with me,” she explained. She would do everything in her power to ensure this neglected cat wasn’t abandoned twice, especially now that he’d started to trust humans again. 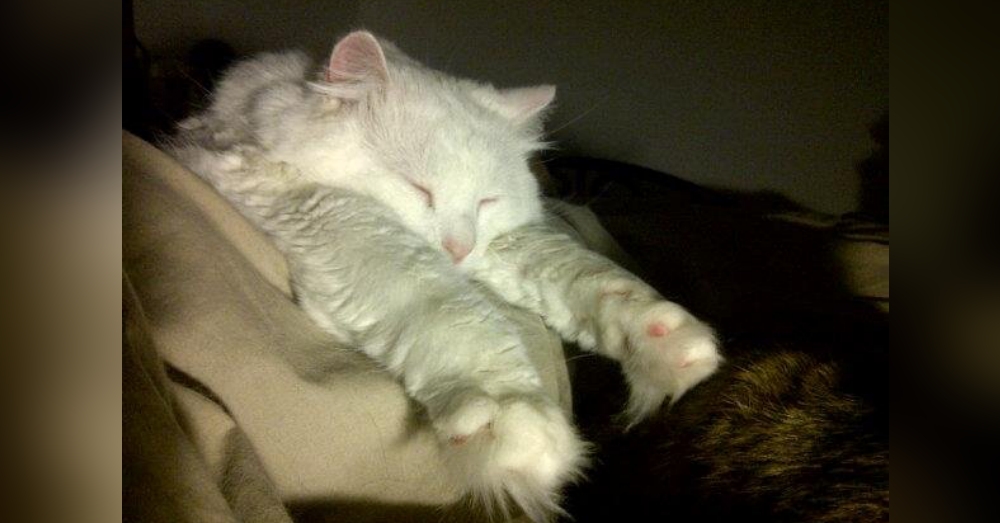 Finally, one day, Teresa was able to scoop up the cat, whom she’d come to call Buddy, and bring him into the house. Two days later, the pair made a trip to the vet, where Buddy was neutered, diagnosed with worms, fleas, and a serious bladder infection, and revealed to be a 7- to 8-year-old cat. 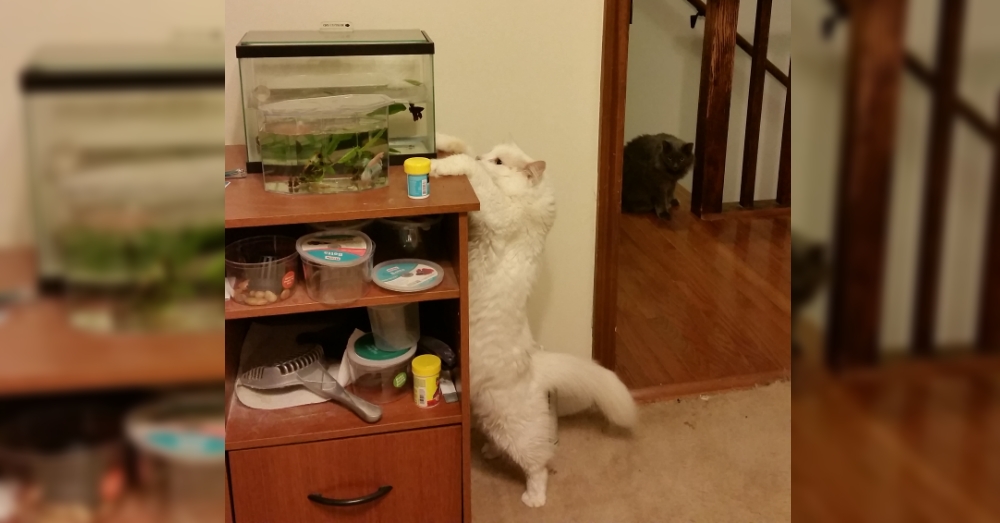 “When he finally showed up again, I picked him up and talked to him. I told him ‘I’m moving away, and you have to come with me because if you don’t, you will have no food, no water and no one to take care of you,’” she remembers.

“He never broke eye contact with me and I really do believe he understood what I said, because he never tried to go out again.” 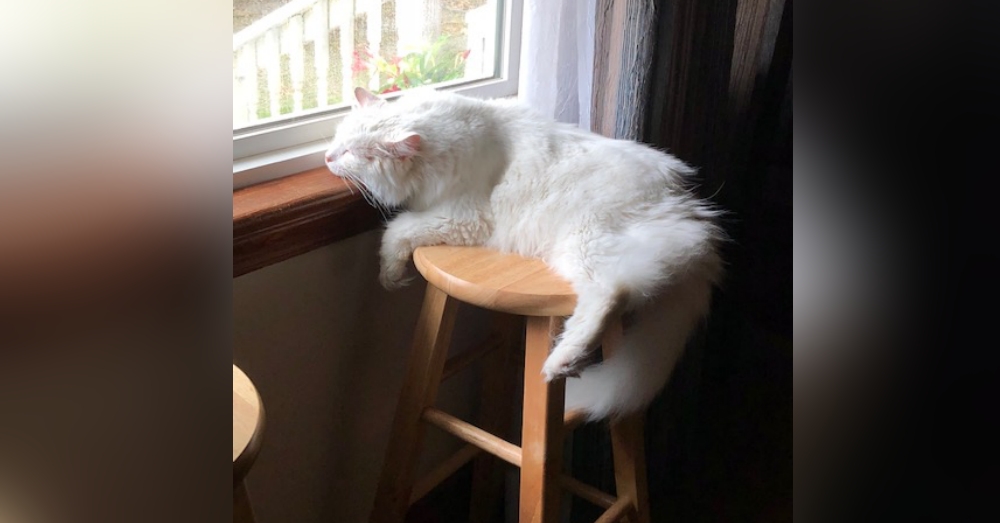 Ten years later, Buddy still hasn’t ventured outdoors and seems perfectly fine leaving his old street life behind. “He has no desire to go outside,” Teresa says. “He is content to be spoiled rotten and living indoors.” 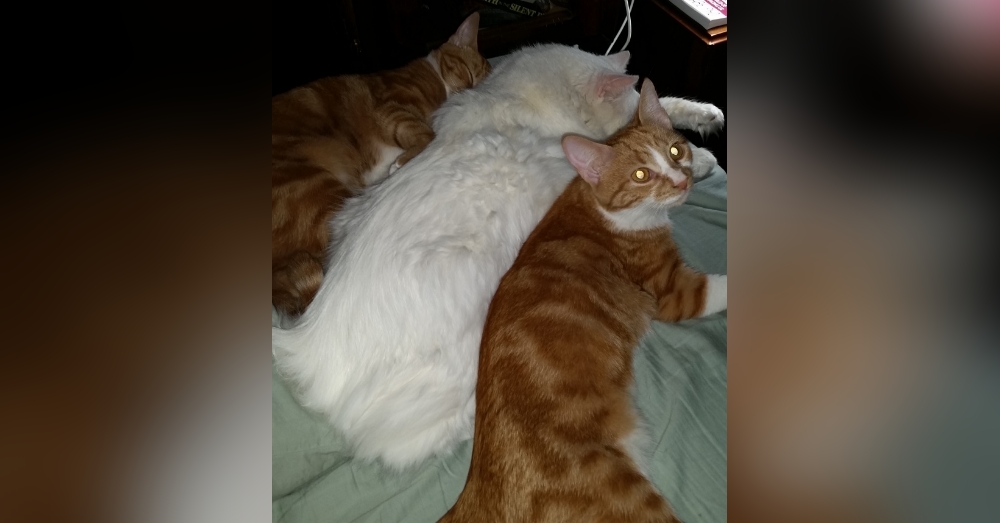 Even so, Teresa still says a quick prayer each time storm clouds pass through their South Carolina hometown, because Buddy is safe indoors.

“Whenever the weather is really cold or rainy or hot and miserable, I look up and say ‘thank you’ to God for letting me catch him, and that he is no longer out there trying to fend for himself,” she says of the now 16- to 20-year-old cat. 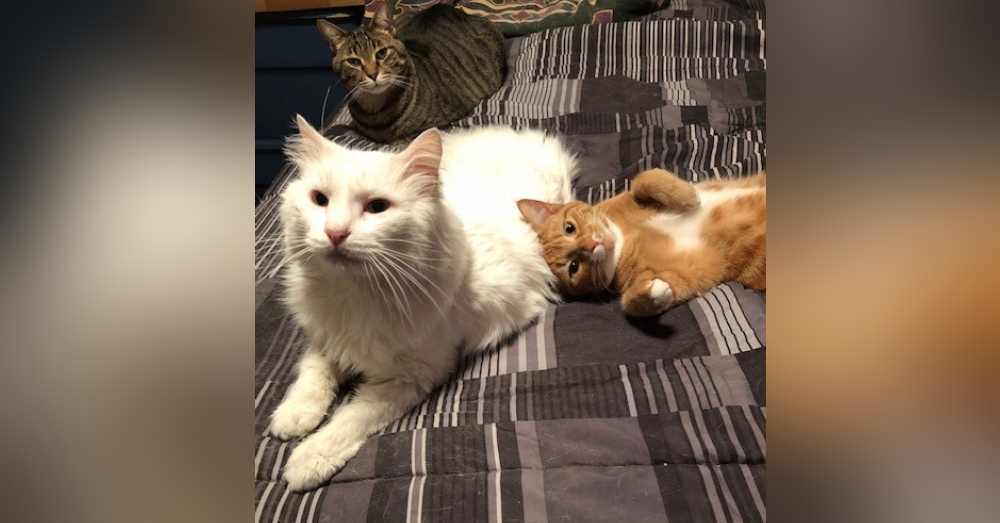 “He is still a ball of energy and I truly love this fluffy little monster,” Teresa says, calling Buddy her “heart walking around on four feet.”

Meanwhile, Buddy — despite always getting along well with cats — has even started trusting other people, after years of hiding from everyone except for Teresa and her son. 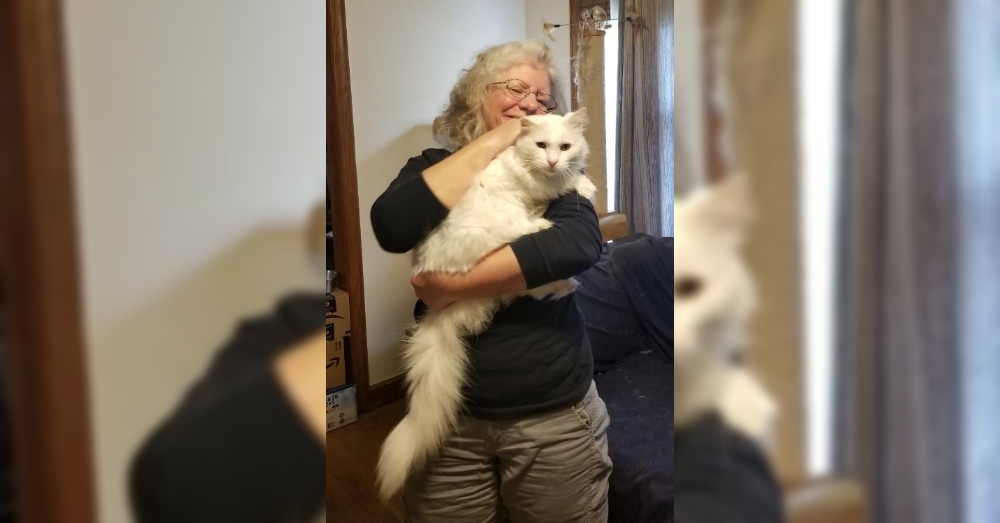 “I know I probably won’t have him for more than a couple of more years, but I’m grateful for the time I have….and that he is off the streets, living a good life,” she says.