A buck was found in Northern California with Christmas lights tangled up in its antlers.

Though it appears to be in the holiday spirit, we’re pretty sure Santa’s roster is full this year, so it’s more likely the deer found its rack festooned after an ill-fated run-in with some unsecured decorations. Unfortunately, he won’t be able to free himself from the tangle of tree lights until the horns are shed, animal rescuers say.

“Catching deer is extremely difficult and catching a buck is even trickier,” Marin Humane posted to Facebook. “Our officers would have to use a control pole to get a handle on him, which leaves them open to the risk of being charged and injured … Our officers will continue to monitor the situation but with winter approaching, we’re hopeful he’ll naturally shed his antlers soon, lights and all.”

In response to a commenter who suggested the deer be tranquilized before rescuers approached it to remove the lights, Marine Humane said it was a dangerous idea, considering the environment. The deer isn’t otherwise impeded by the lights, so it’s best to let nature take its course.

“He’s in a populated area and could easily jump out into traffic before it takes effect, putting both him and the public in danger,” they wrote. 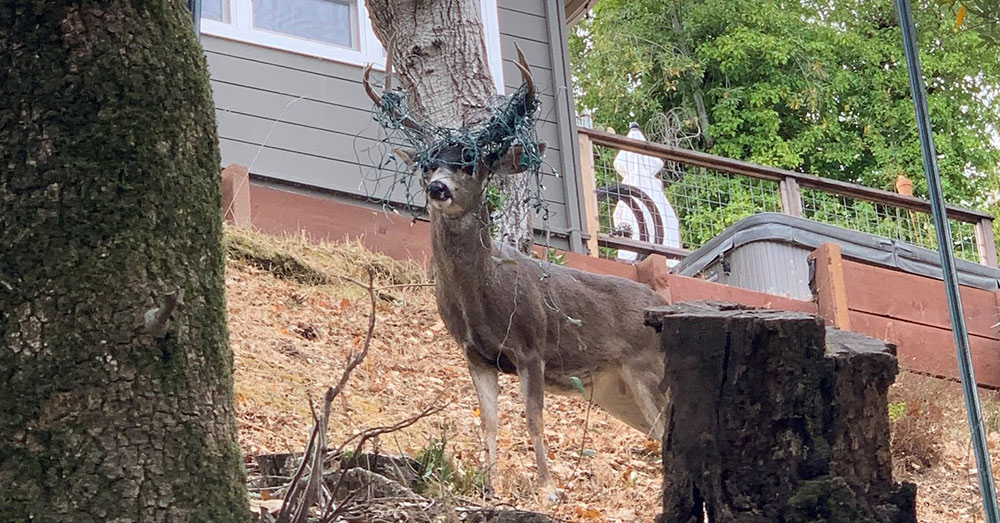 Source: Facebook/Marin Humane
The buck has holiday lights tangled up in its antlers.

Thankfully, the deer stands to lose his antlers in the near future. It’s almost the end of mating season, when they will be shed for the winter.

“The good news is that he’s going to be okay,” said Lisa Bloch, director of communications for Marin Humane. “He’s totally mobile and able to graze. He’s just looking rather festive.”
The group reminded the public that low-hanging holiday decor poses problems for wildlife when put up outdoors.

“This serves as a good reminder that when hanging holiday decorations, make sure they’re secure and high enough where they’re less likely to be an issue for wildlife – as opposed to being draped over bushes, as these lights may have been,” Marin Humane wrote. “We’re lucky to share our space with so many animals in Marin County so let’s be mindful of their safety, even when we’re getting festive!” 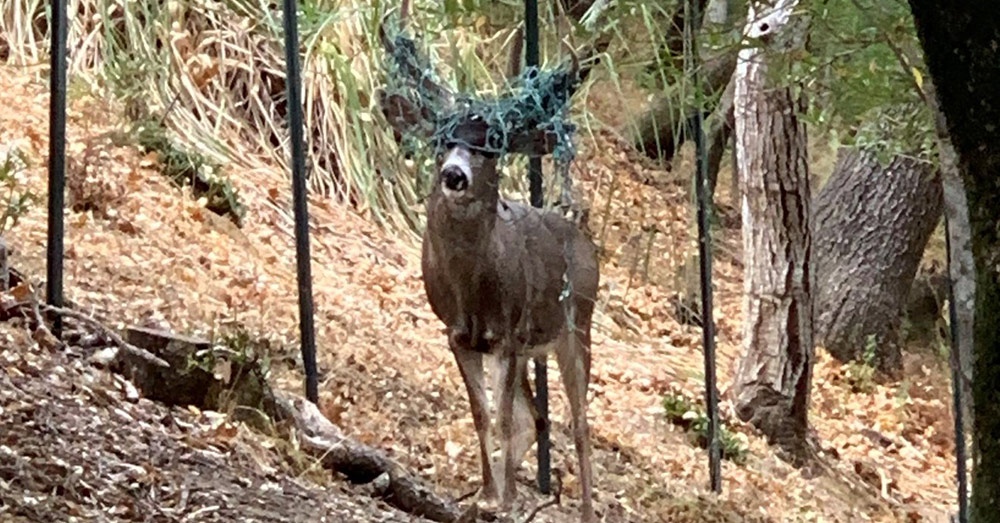 Source: Facebook/Marin Humane
Rescuers recommend waiting until the animal sheds its horns to remove the lights.

According to the New York Post, Christmas isn’t the only time bucks are in danger of finding their antlers in a tangle.

“We haven’t seen holiday lights before, but deer definitely get stuck in lots of things,” Bloch said. “We’ve had them stuck in hammocks, people who have clothes out to dry, anything that’s loose and able to get tangled in.”