Kathy Maniscalco, an artist who lives in Santa Fe, New Mexico, is often inspired by nature for her paintings, but she never expected her next muse to appear on her front porch.

One day she looked out her window and saw a mama bobcat and her five kittens relaxing on her porch. The family rested right in front of a window, giving Maniscalco the best view. She was thrilled by the experience and made sure to record it to share with others.

The first video she captured was of the kittens feeding.

With full bellies, the kittens stretched out and took naps in the sun, but not for long. The kittens spent the afternoon playing and exploring to the delight of Maniscalco.

She continued to watch the adorable family but kept her distance because she didn’t want to upset them. “I was very quiet, so as not to disturb, but she saw me but felt safe enough to allow me to record her,” wrote the artist on Facebook.

At one point, two of the kittens were photographed hiding up in the portal of the porch. Another was pawing at the glass door. “One kitten was saying let me in, rubbing paws against glass of door,” said Maniscalco.

After spending the day relaxing on the porch, the bobcat family moved on that evening. However, the experience will never be forgotten as Maniscalco plans to paint mama and her babies. 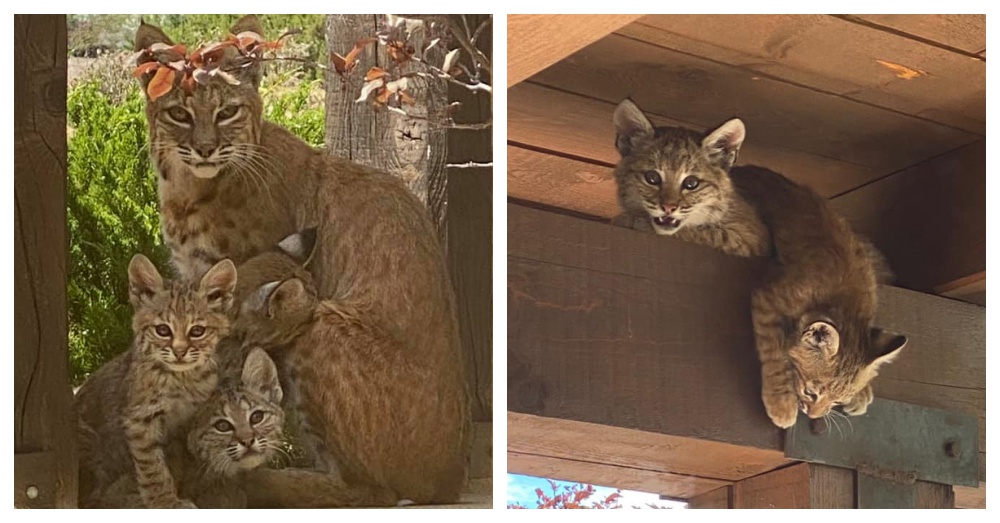 Her friends and followers were mesmerized by the videos and so was she. “We’re still amazed we got so much footage thru the windows!”

Bobcats are elusive and nocturnal, so are rarely seen by humans. Be sure to share the adorable videos above with your friends and family.

Alaskan Photographer Captures Rare Animal Appearance On His Deck: Click “Next” below!