Blue is being declared a hero for his brave and successful effort to save his owners, Nina Teller and Leroy Buchanan. The eight-year-old pit bull was relaxing with his humans when two burglars came barging through the door. “I told Blue to get after the guy,” Buchanan told Penn Vet. “He locked onto the guy’s leg and that’s when he fired his gun.” Although the burglars were unsuccessful in robbing the house, Blue was shot from close range and the criminals fled. Teller and Buchanan immediately brought Blue to Penn Vet’s Ryan Hospital. 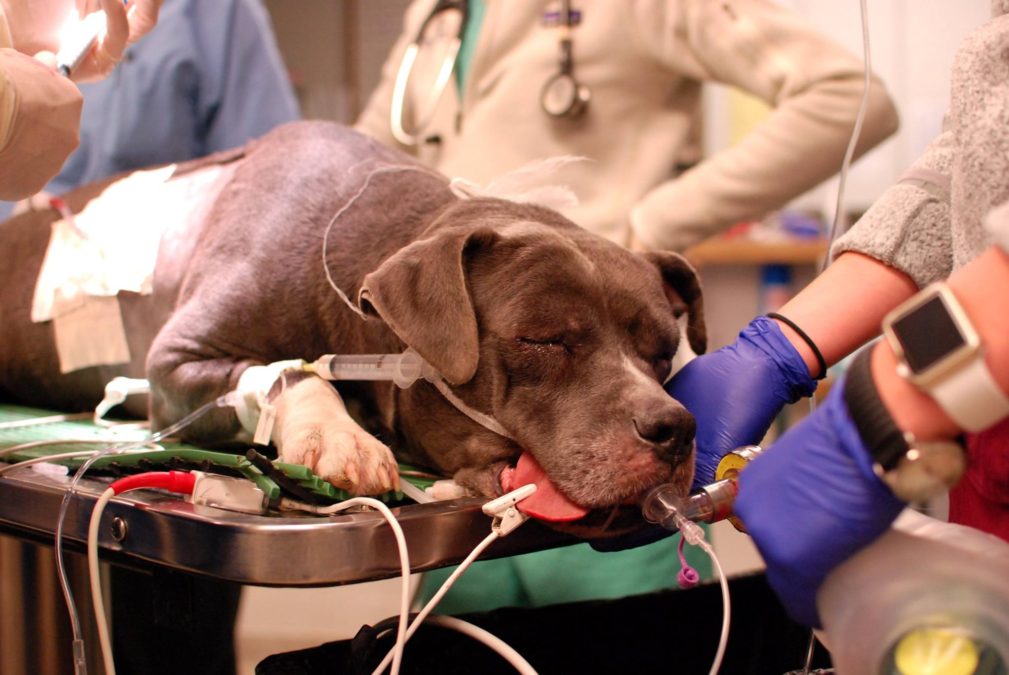 “We knew the wounds were close to his thorax or in his thorax, and he had some air under his skin. So the first thing I was concerned about was thoracic trauma and bleeding from the bullet,” Dr. Erica Reineke, Associate Professor of Emergency and Critical Care, said in a statement. The vets acted quickly and performed emergency surgery on Blue. I’m sure the surgery seemed to last forever for the poor pup, but was only about an hour. Luckily, the surgery was extremely successful and according to the Penn Vet, Blue was moving and eating with no complication as soon as 24 hours after the surgery. Sally Powell, director of operations for Ryan Hospital, helped finance the emergency surgery for this four-legged hero and couldn’t be happier of the outcome. “Blue was shot trying to protect his family during a home invasion,” Powell said in a Penn Vet statement. “Our Charitable Care program allowed this ‘hero dog’ to return to a family that loves him dearly and is forever grateful for his protection.” I can’t remember the last time I heard of a break-in when the owners were home, but Teller and Buchanan are certainly grateful for their knight in shining fur!