A match between the Dallas Cowboys and New York Giants at MetLife Stadium in New Jersey was delayed for a few moments as a third competitor entered the field. A black cat crept onto the turf near the 50 yard line and made its way to the end zone with a deftness to rival the running backs on both teams.

Announcer Kevin Harlan ran with it, too. The voice of Westwood One during Monday Night Football, Harlan turned this momentary delay into a moment few will forget.

“He’s walking to the three. He’s at the two, and the cat is in the CDW red zone!” Harlan emoted. “Policemen and state troopers have come onto the field, and the cat runs into the end zone! That is a TOUCHDOWN! And the cat is elusive, kind of like [running backs Saquon] Barkley and [Ezekiel] Elliott, but he doesn’t know where to go!” 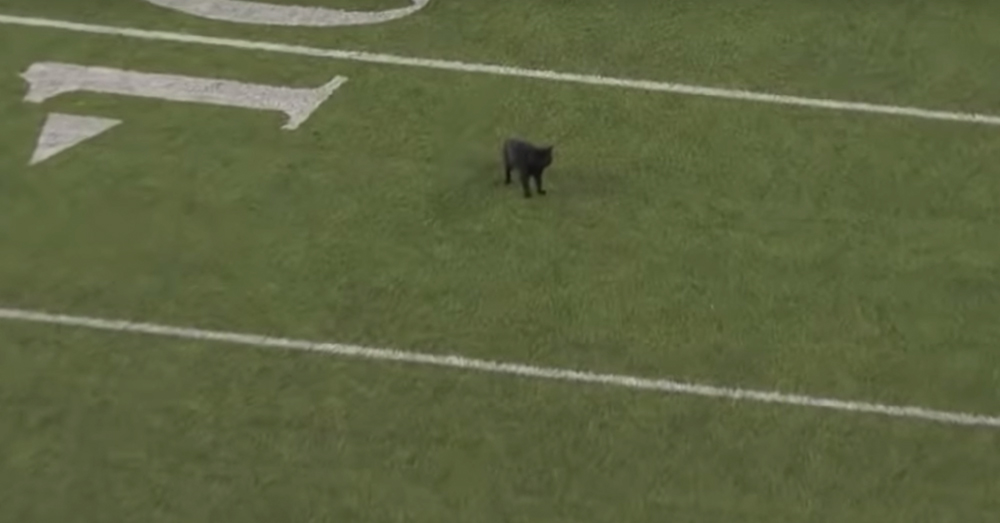 After running into the stands in hopes of making a quick exit, the cat ran back onto the field before heading into the tunnel.

During the course of its downfield skiffle, the cat must have crossed the home team’s path, as the Giants lost their lead, and the game, to the Cowboys. 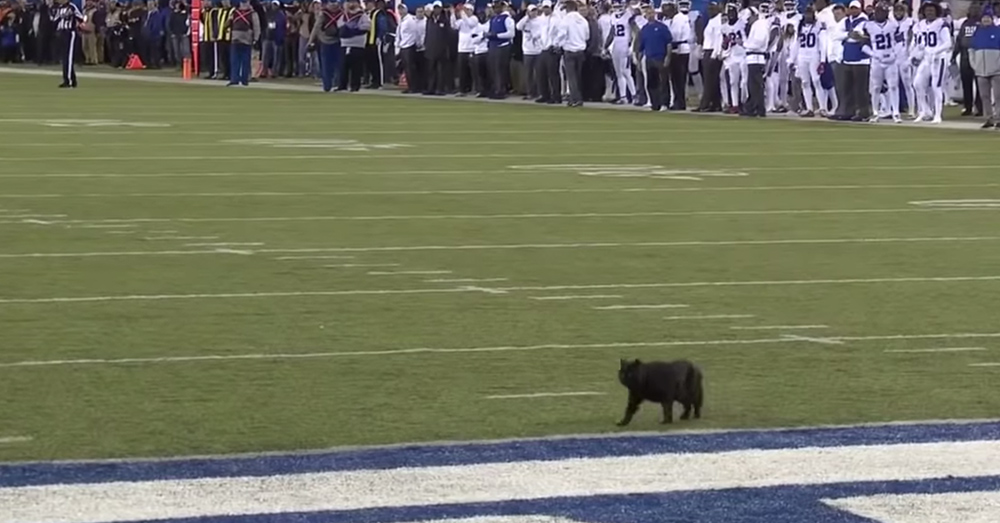 Source: YouTube/Ding Productions
“He’s walking to the three. He’s at the two…”

“I ran,” Cowboys’ defensive lineman DeMarcus Lawrence told SportsCenter. “Game over. If a black cat runs on the damn field on a ‘Monday Night Football,’ you might want to call it quits, bro. Y’all’s luck is terrible.”

.@TankLawrence shared his feelings on the black cat that was on the field 😆 pic.twitter.com/Tg8AbV8lm5 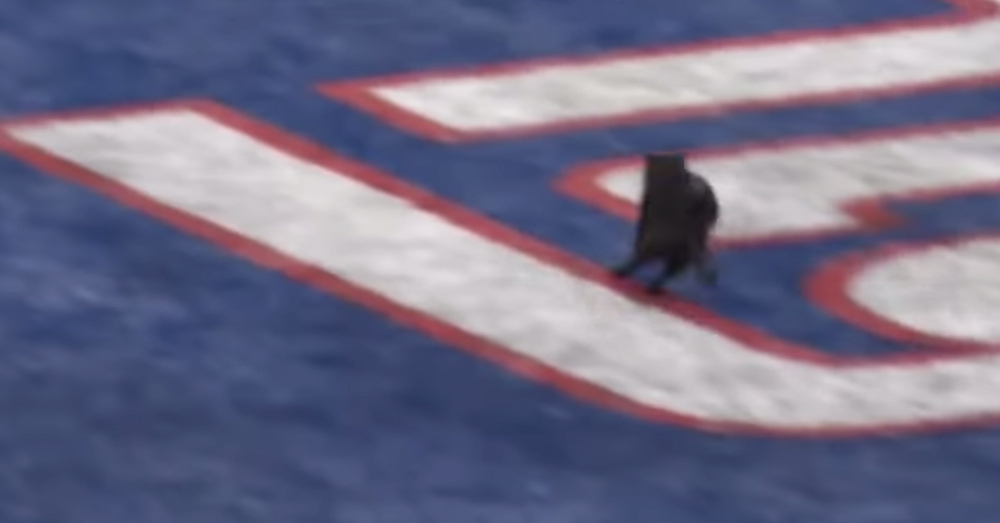 Source: YouTube/Ding Productions
“And the cat is in the CDW red zone! That is a TOUCHDOWN!”

Giants safety Jabrill Peppers maintains he isn’t superstitious, but in the words of a former regional manager of a mid-level paper distribution company in Scranton, Penn., “he is a little stitious.”

“Any time I saw a black cat or it went across me growing up, something bad happened,” Peppers told the New York Post. “I kind of grew out of it now, but I still don’t like ’em. I wasn’t gonna go out there and get it.” 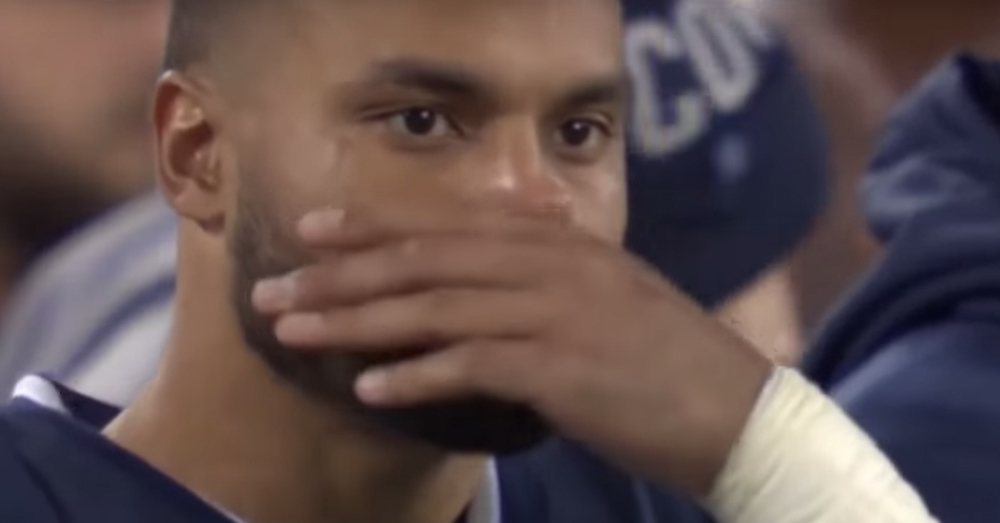 Source: YouTube/Ding Productions
The cat drew the eyes of the entire stadium.

Giants owner Jerry Jones blamed the 37-18 trouncing on the curse of the cat.

“I haven’t seen one glare at me that far away before. I know he was looking at me the whole time he was out there,” Jones said. “But things did kind of change when that black cat came. What was amazing to me was how few people wanted to go grab him.” 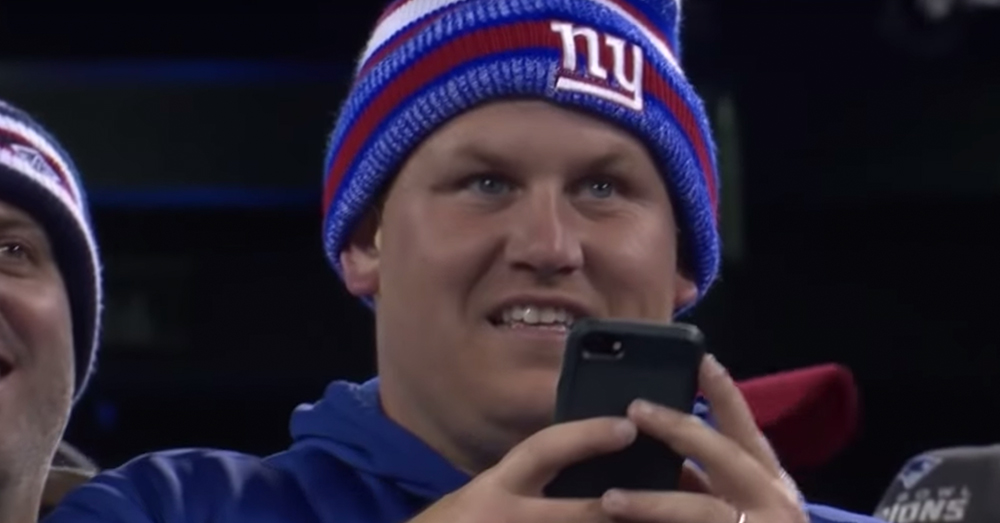 Source: YouTube/Ding Productions
The Giants ended up losing to the Cowboys, 37-18.

Before the game ended, the Twitterverse was already purring with videos of the cat and audio from Harlan’s call. Many even applauded the announcer for staying true to his sponsors, working in a shoutout to CDW during the feline frenzy.

AUDIO: There was a cat on the field. @Kevinharlan had the #MNF call for us.

In an email response to the Washington Post, CDW said it was, “Awed by this cat’s inspiring display of athleticism, proving what can happen when talent, hard work and opportunity meet. And Kevin’s instant-classic play call will no doubt be studied by aspiring announcers for years to come. On another note, we are now shifting our marketing dollars to cat-based activities and sponsorships.”

According to the Post’s Cindy Boren, “the cat has not been found, but that MetLife Stadium officials promised to take it to a veterinarian when he/she is.”

37th Horse Death On California Track Is Tipping The Scales Toward Federal Oversight: Click “Next” below!