This Hungry Stray Was Looking For Food, But It Wasn’t To Feed Herself!

This stray pup was out and about looking for something to eat when a kind human decided to feed her. Well, he thought he was feeding her. When he handed the hungry stray something to eat, she didn’t dig into her meal. Instead, she ran off. Curious, the man decided to follow her. What he found was completely unexpected.

The kind man followed the pup all the way through, what looks like, a marketplace, down an alleyway, and into a dilapidated yard. The man watched the pup approach a darkened entry way and out came four tiny puppies. It turned out that the pup wasn’t looking to feed herself. Instead, she was looking to feed her babies! This video is proof that a mother’s love truly knows no bounds. 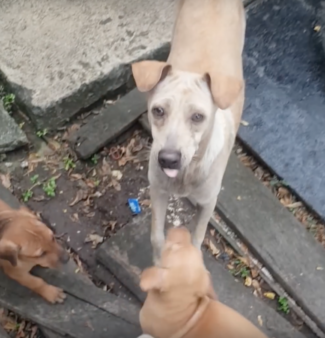 It was obvious in the video that the mom was hungry. But despite her hunger, her only concern was the well being of her puppies. She was able to travel the distance between the marketplace and her makeshift home with the piece of chicken in her mouth and she wasn’t tempted to take a bite! Her determination is astounding and her puppies definitely appreciate it. Once they realize that their mom is back home, the tiny litter of puppies rushed to greet her. Well, three of the pups rushed to greet her while the fourth went straight to the human that followed her. The three that headed straight for their mama, immediately began to chow down on the morsel of food their mom was able to nab them. On the other hand, the fourth puppy went straight for the prize. The pup ran up to the man and began investigating the bag that he had. The pup began pulling on the bag to get to the food inside and the man easily gave into the pup’s wishes.

The strength of the bond between a mom and her babies, or puppies, is an amazing thing to witness. And this video just proves that it doesn’t matter the species, a mama will do what she needs to in order to protect her babies.