Lighting initiated a wildfire west of Durango, Colorado, on June 14 that quickly spread. The East Canyon Fire has already burned nearly 3,000 acres and caused countless animals to run for their lives.

All four of the bear’s paws were badly burned and wildlife officers found him resting in reeds next to a pond. Wildlife officers Steve McClung, Andy Brown and Matt Thorpe slowly approached the injured yearling but he did not move. 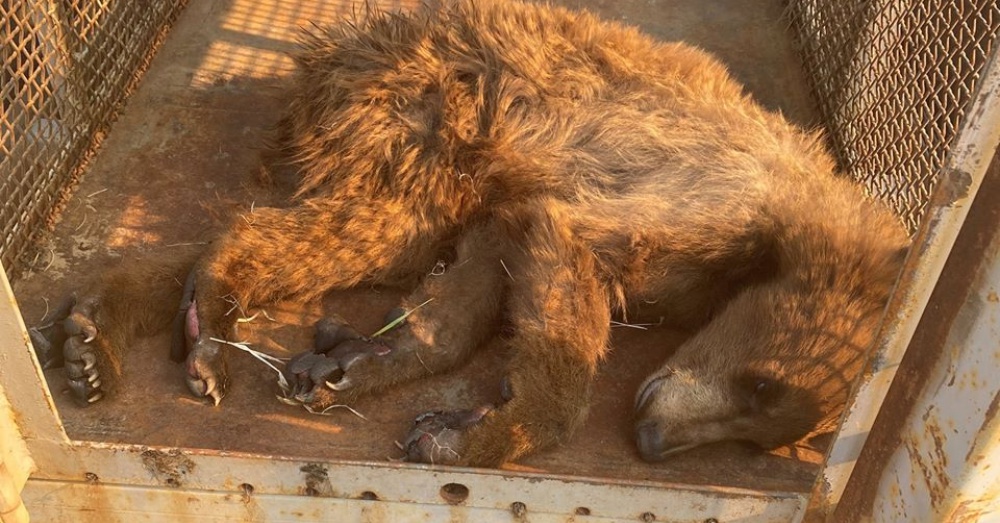 “You could tell it was really hurting,” McClung said.

The officers used a tranquilizer dart to sedate the bear and brought him to Frisco Creek wildlife rehabilitation center to be examined and treated.

“Across the road from where we found it the area was burned heavily,” McClung said. “There were little spot fires and some stumps burning. We can’t say exactly what happened, but it probably got caught and had to move across some hot spots.” 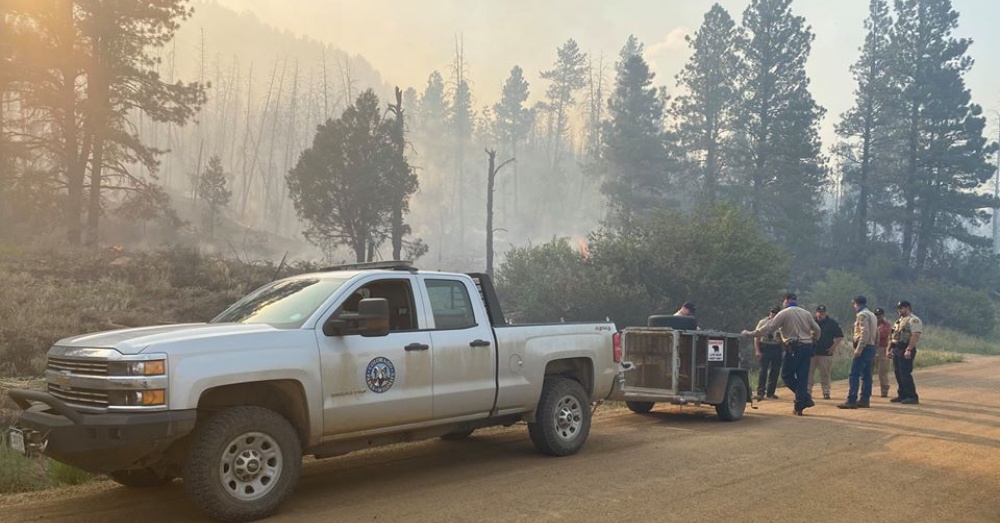 Officers believe the bear is a yearling, the age that they start to venture out on their own, and became surrounded by flames. Thankfully, he escaped and was spotted by firefighters. 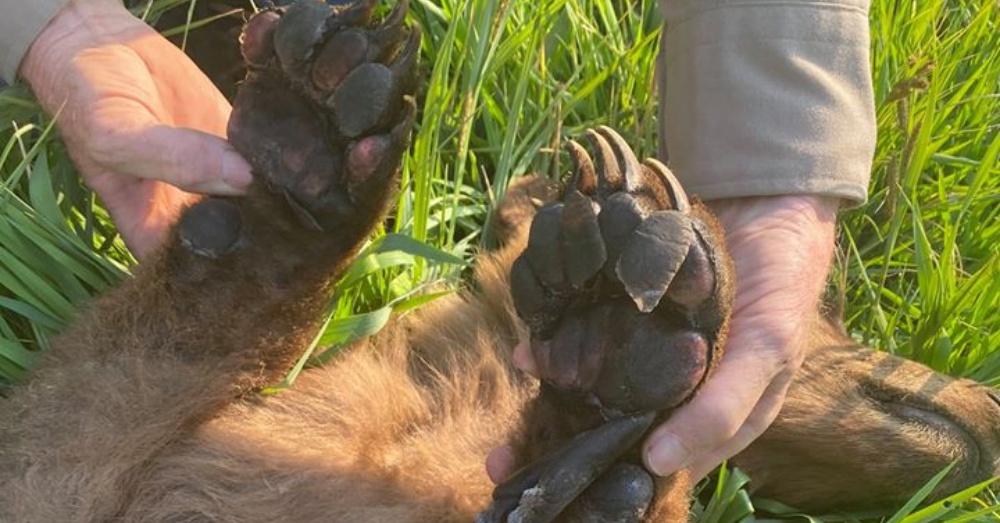 Michael Sirochman, veterinary manager at the center, examined the bear’s paws and said that while they were badly burned, there was no permanent damage. “The prognosis is good and the underlying tissue is healthy,” Sirochman said. “We cut off the burned tissue that was sloughing off and we put on bandages.” 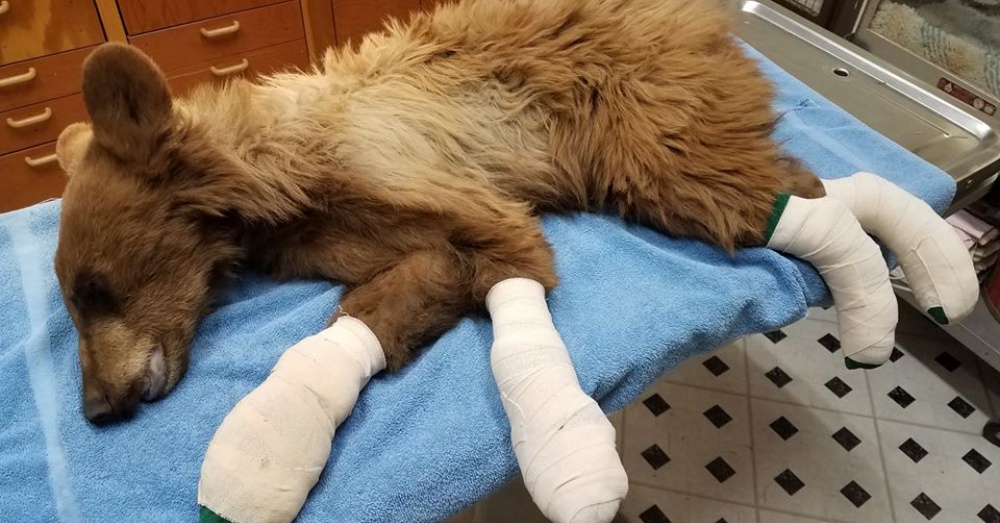 The young bear is expected to make a full recovery and will be released back into the wild in roughly eight weeks. Wildlife officers said they always try to release the rehabilitated animals back to the area they were found.

“We always hate to see injured animals, but we’re pleased we were able to rescue this bear so we can nurse it back to health and return it to the wild,” said Thorpe, wildlife manager in Durango. 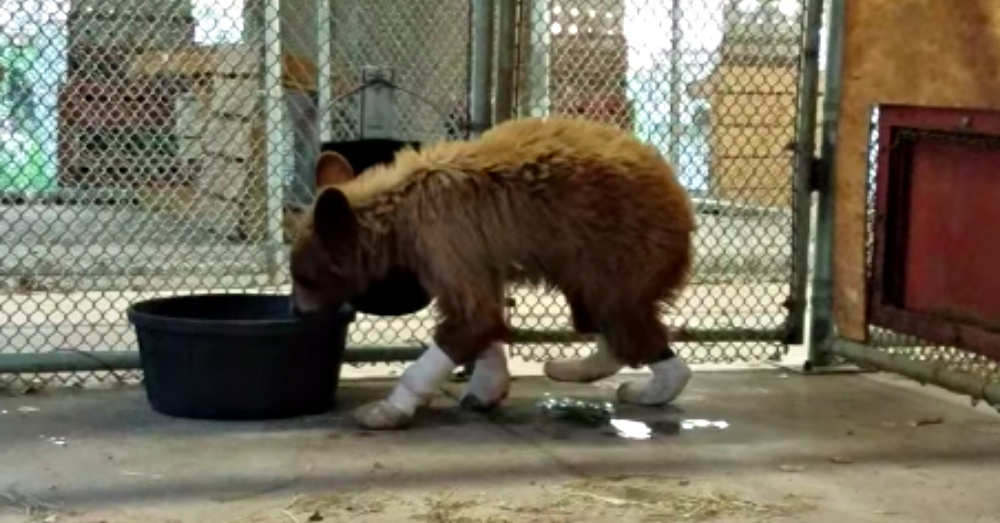 The East Canyon Fire is still burning but firefighters report that it is 79% contained. Thank you to all the brave firefighters battling the flames and saving lives.

Followers of Colorado Parks and Wildlife are praising those involved in the rescue and relieved to hear the bear will fully recover. One person commented, “Oh my gosh, his poor pads. Animals amaze me with what they can endure to survive. Speedy recovery!!”

See how the injured bear is getting around in the video below.