Professional pet photographer Belinda Richards has a knack for capturing the “human side” of her subjects.

Her latest series, “Be More Dog,” was inspired by a furry friend with an uncharacteristically human expression.

“The look on the dog’s face had such a human-like expression, it was so emotive, and had such a good connection with the camera,” Richards told Insider.

But the picture was missing something.

Richard spent the following few months editing in a few humorous details and political allegory to create “It’s A Catastrophe!”

As a result of this and other photos, Richards was named Emerging Photographer of the Year by the Australian Institute of Professional Photography Awards. The AIPPA praised Richards’ translation of an upended patriarchy, echoing the sentiment of the #MeToo movement and fights for gender equality.

She did it all without making the animals uncomfortable, too. 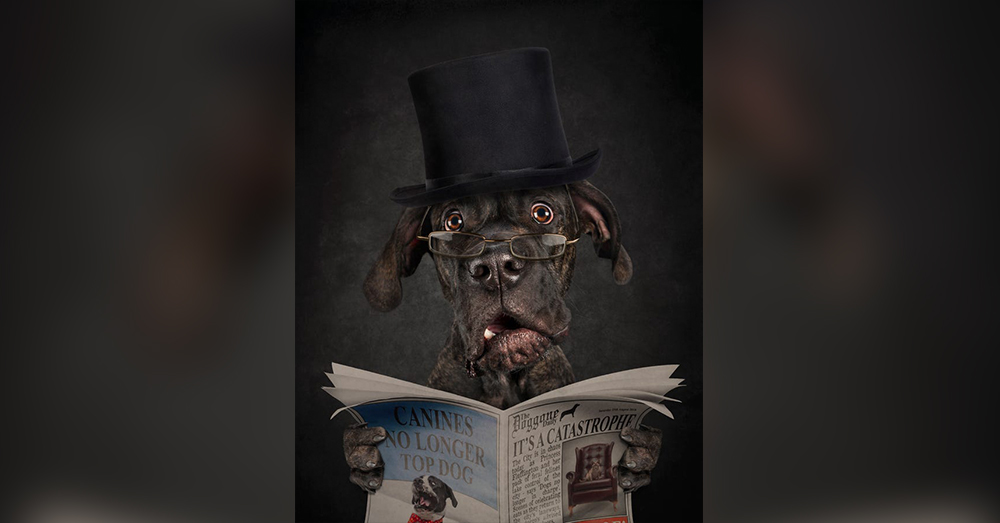 “Generally when we speak of cats and dogs we speak of dogs as men and cats as women,” Richards said.

“It’s A Catastrophe!” shows an upper class dog sitting aghast at the day’s headlines, which herald an oncoming revolution by the world’s cat population.

“Cats have taken over the world and the dogs are no longer in charge,” Richards said. “[The image] was juxtapositioned to what was going on in the world at the time with the #MeToo movement.” 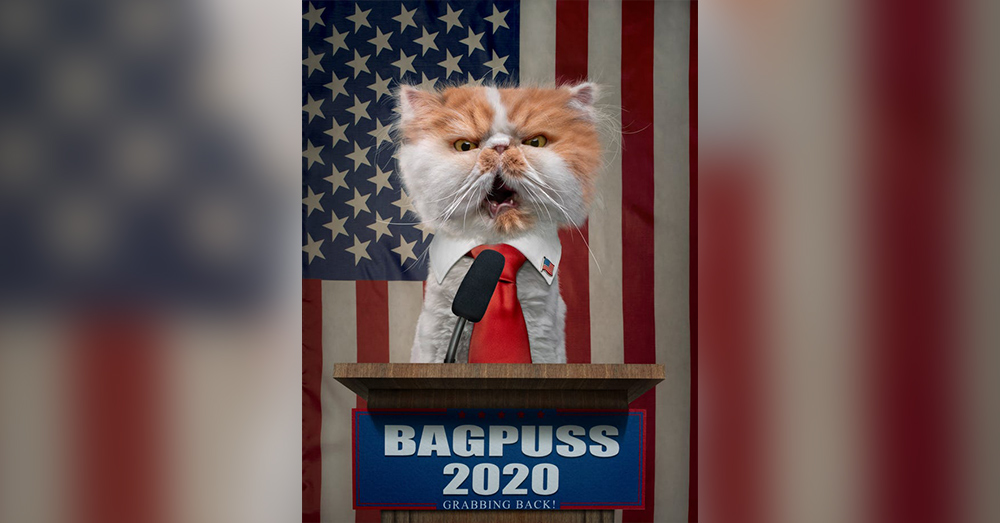 Richards doesn’t shy from political issues in other photos, either. “Bagpuss 2020” lampoons Donald Trump by re-purposing the salacious comments he made in an “Access Hollywood” interview. Candidate Bagpuss is running a single-issue platform and “Grabbing Back!”

When Will I Be Famous? 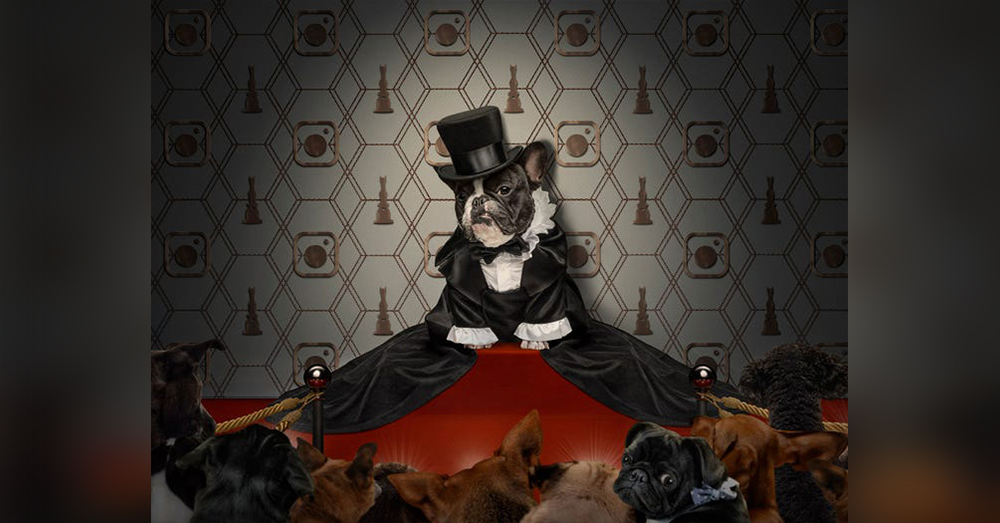 Source: Instagram/frogdogstudios
“When Will I Be Famous?” by Belinda Richards

Richards used a French Bulldog named Frankie for “When Will I Be Famous?,” a take on social media celebrity status.

“As a dog photographer I am constantly on Instagram looking at these Insta-famous dogs, which I find quite humorous, how much of a following they have,” she said. “Frankie here is at the Insta dog awards and he is being revered by his peers just like the way we do with our celebrities on the Oscars red carpet. The dog Buckie, looking back at the crowd, is where the title comes from; he wants to be famous like his idol, Frankie.” 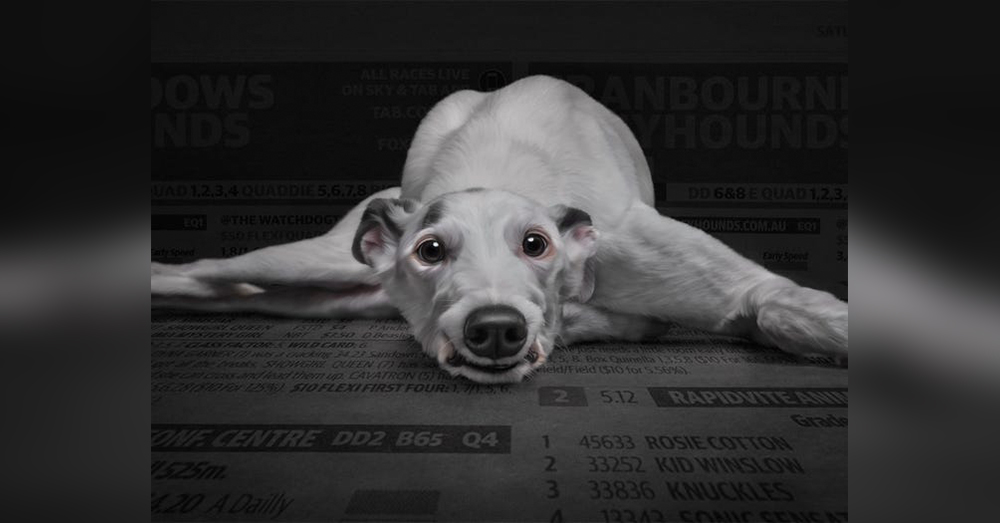 “When they came in for a portrait she just kind of plopped down and gave me this vacant stare, and that’s when I decided to pop the form guide in the background to give a narrative on what the racing industry does to our beloved companions,” she continued. 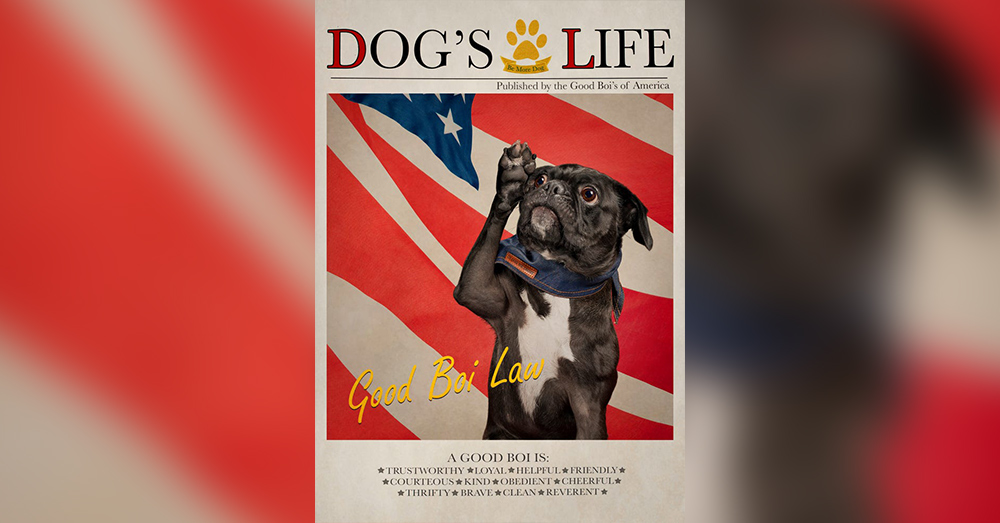 Richards alludes to an iconic periodical in “Dog’s Honour,” with help from a very good boi named Opie.

“I looked at the covers he used to do for Boy’s Life magazine, which is from the Scouts, years and years ago,” she said. “Basically it’s exactly the same as what the Boy Scouts’ law is: a Boy Scout is loyal, trustworthy, friendly, etc. It’s a bit of a play on how we are raising our boys to be men, and how we could possibly go back to some of those basic attributes to teach our kids to grow up to be better men.” 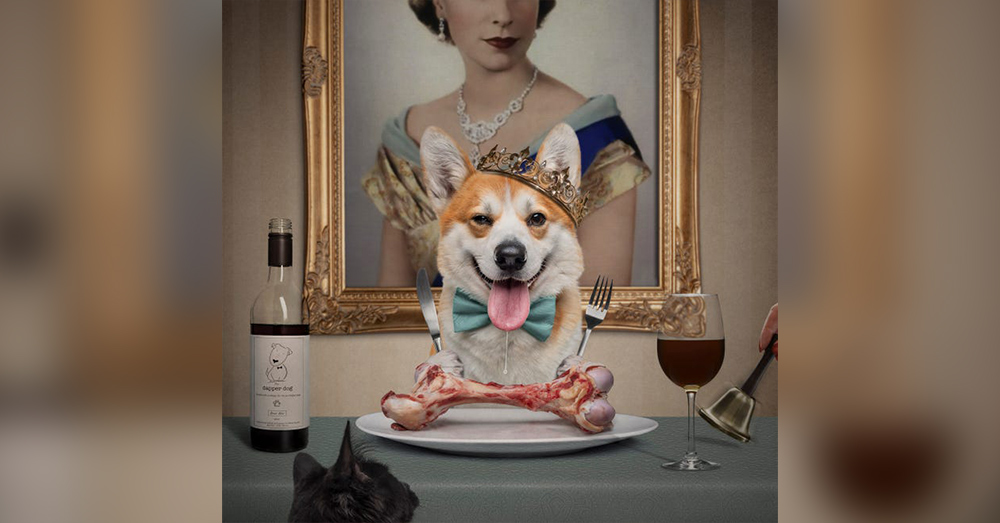 Richards took her inspiration for “The Queen’s Corgi” from the monarchy, and

“We all know that the Queen of England has had corgis for years and years. It’s also a social hierarchy thing, we’ve got the cat looking down from the bottom thinking, ‘Why don’t I get treated this way?’ which is another play on the male-female social hierarchy,” she said.

“In a lot of my images I pop some ‘cookies’ that you’ve got to find. On the wine bottle here, it’s made by Scaredy Cat Wines, and the volume is 17% because women get paid 17% less than men. Little things like that help you explore the image and create the narrative,” she continued. 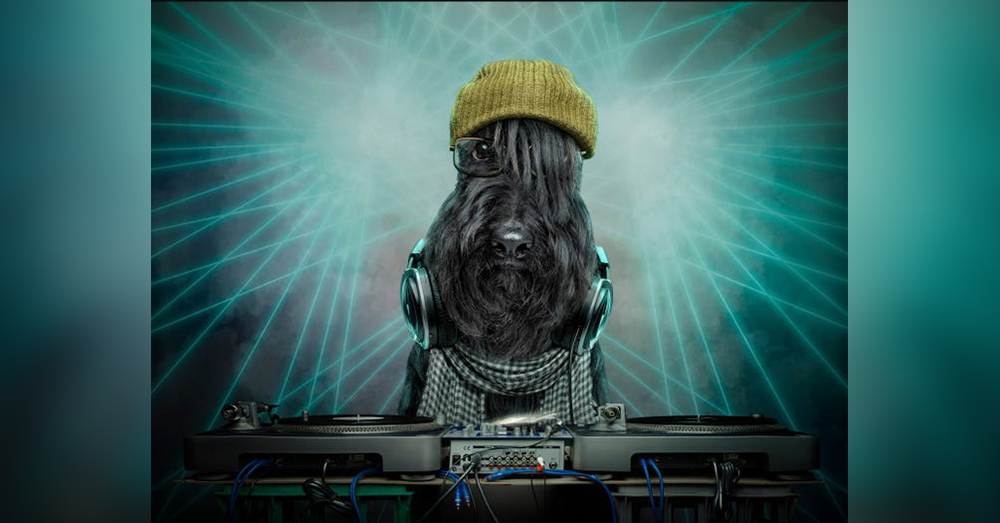 “Electronic Dog Music” imagines a dodgy DJ spinning some deep dog house. Richards brought out this terrier’s hipster side with a scarf, glasses, and a beanie.

“[A] humorous play on current trends and the hipster movement,” she said.

Richards has photographed hundreds of adorable animals, in and out of “costume.” You can find more of her work on her website and Instagram page.