They Put These Orphaned Baby Genets Near Their Dog. When The Dog Did THIS, They Couldn’t Believe It!

Baby genets (small African mammals in the civet family) were found lying in a puddle underneath a fallen tree near Hoedspruit, South Africa. Children had chased off the mother by throwing stones at her, and then she never returned, leaving the babies all by themselves. Different children spotted the orphaned babies and called a local pastor.

The pastor called Daktari Bush School and Wildlife Orphanage, a nonprofit organization in South Africa that cares for orphaned and injured wildlife, and teaches local kids to care for animals and the environment.

The two-week-old genets were brought to the orphanage, where cofounders Ian and Michele Merrifield began taking care of them. But they were worried they wouldn’t survive without their mother’s warmth and milk. 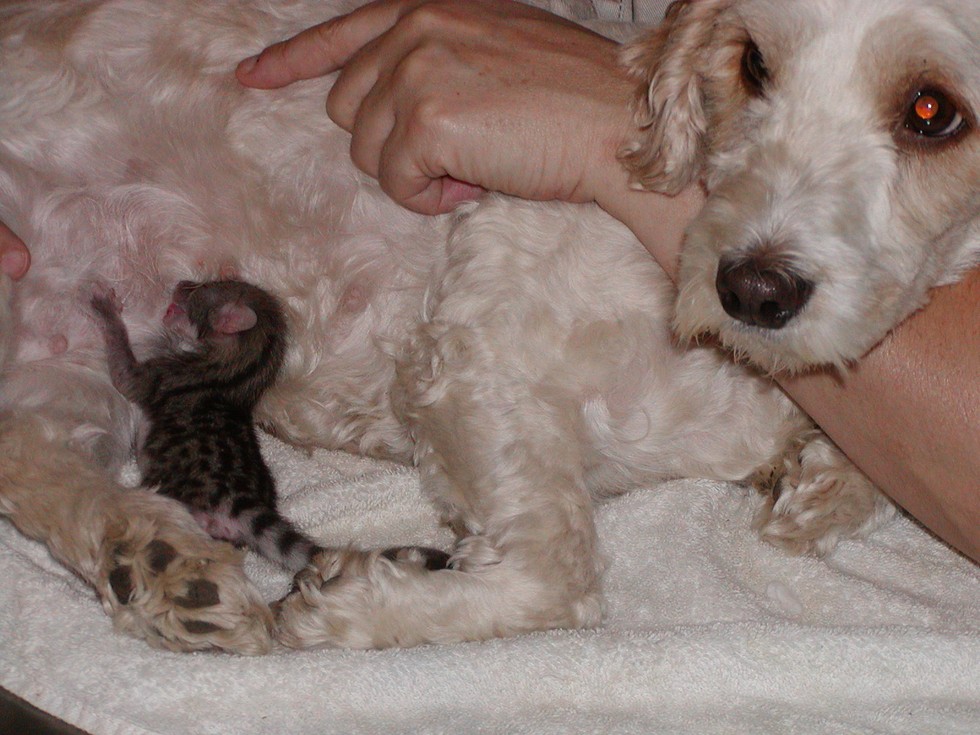 Their chances of survival were slim, but the couple did everything they could to keep them alive. They wrapped them up in blankets and put them next to their three dogs in the office, thinking they could substitute their mother’s warmth. 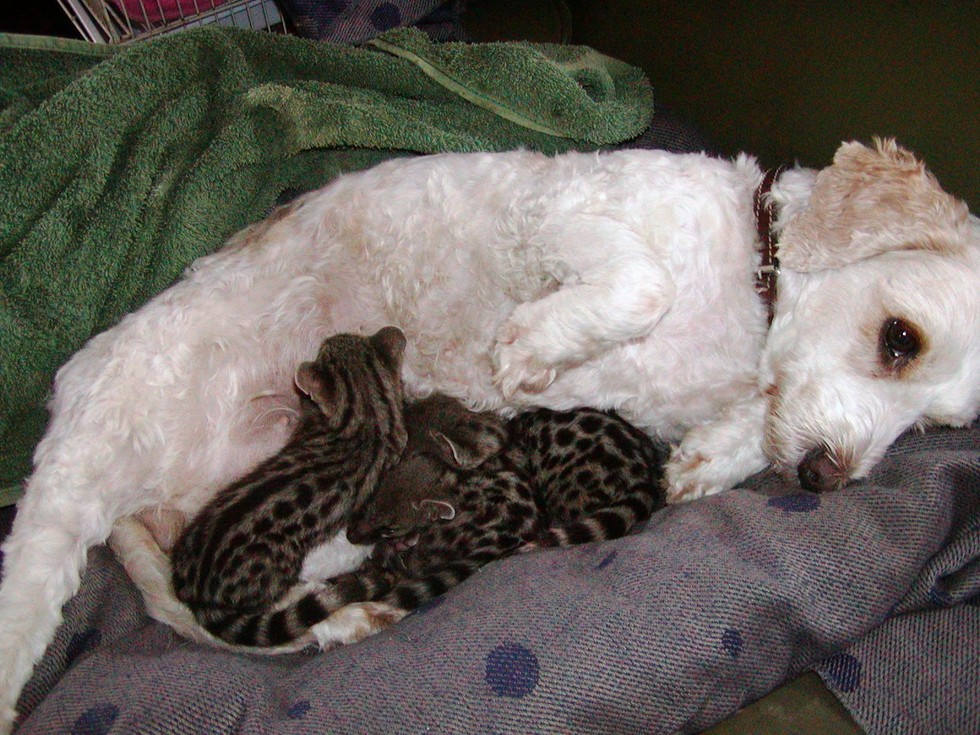 One of the dogs, a poodle-cocker spaniel mix named Candy, grew a strong liking to the baby genets. The Merrifields would feed the babies warm milk using a syringe, and then they would snuggle up to Candy’s tummy. They soon realized that the genets were trying to suck Candy’s nipples. 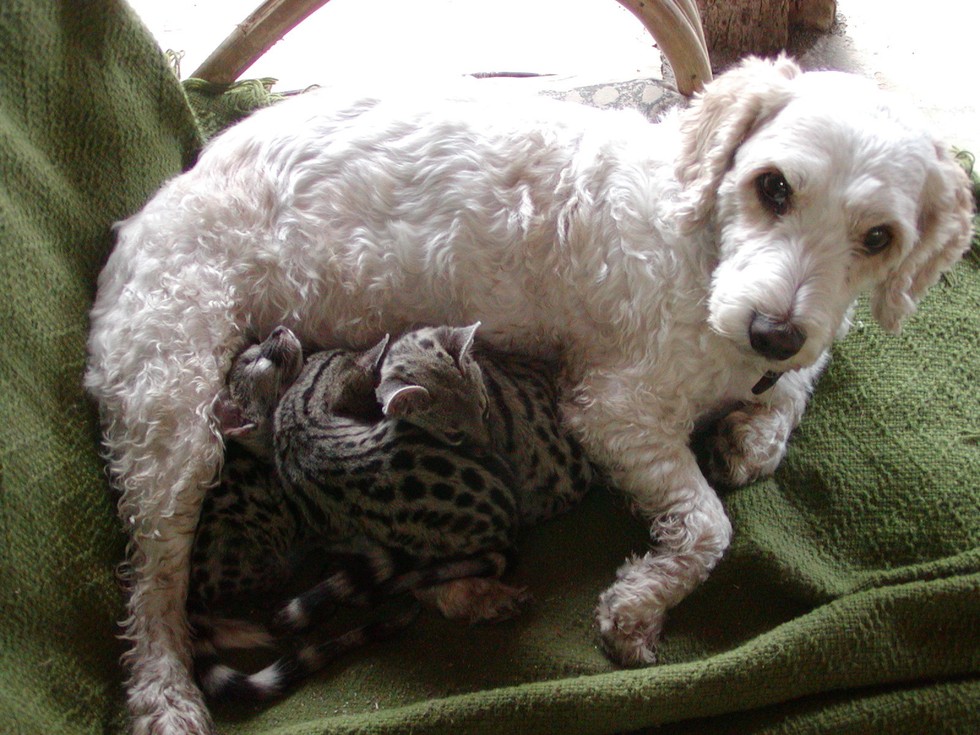 Days later, much to their surprise, Candy started producing milk! She had had babies in the past, but she wasn’t pregnant, so this was totally unexpected. “The only way we could explain it was that her motherly instincts had kicked in,” Ian told The Dodo. 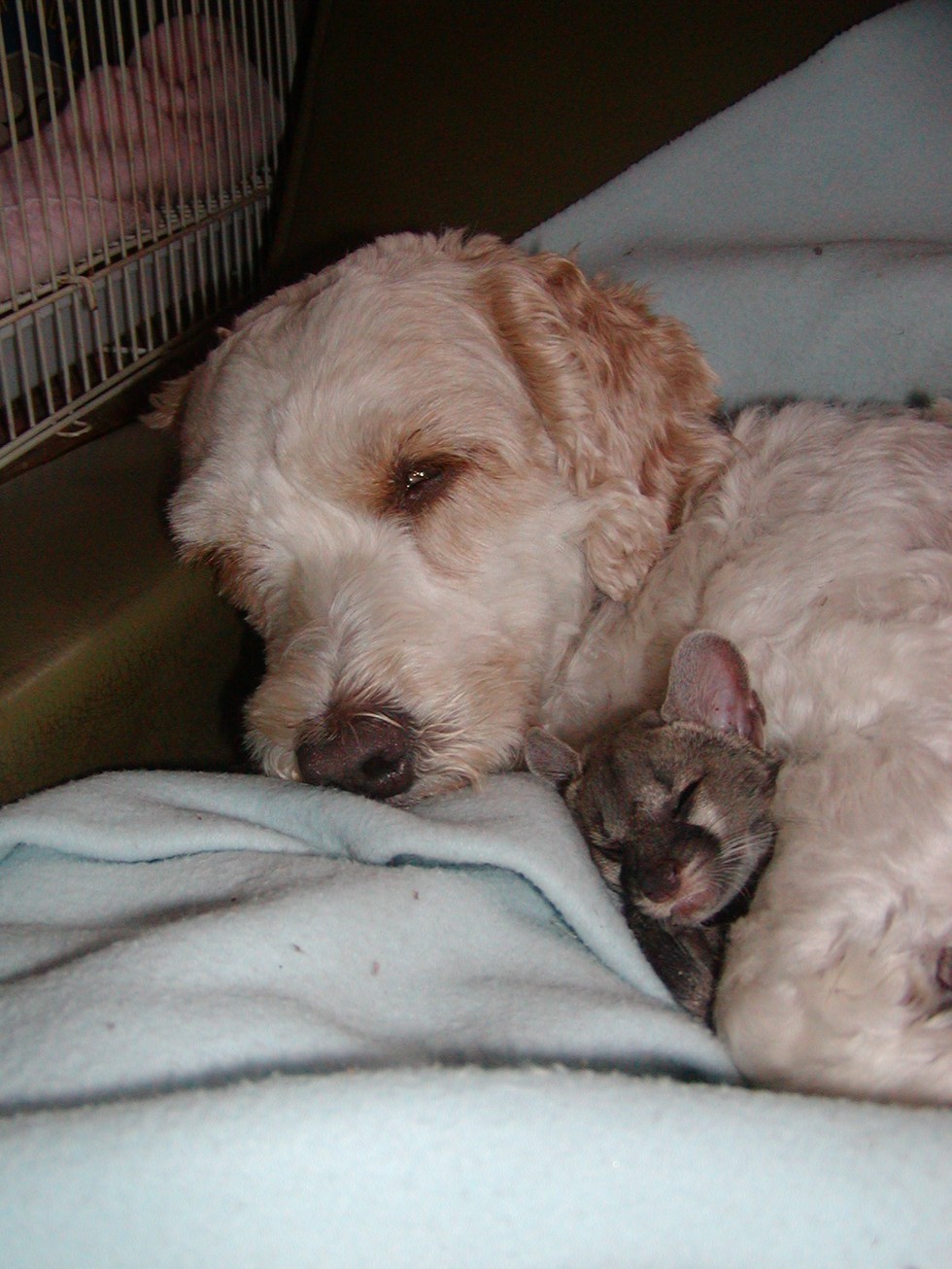 Dr. Honorata Lenk Markham, a veterinarian at Oaklawn Animal Hospital in Rhode Island, explained to The Dodo that maternal hormones get activated including oxytocin, the hormone that produces milk. “In this case, the dog felt a strong connection to the babies, which then must have started hormonal cascade in her body that resulted in her adopting the animals as her own.” 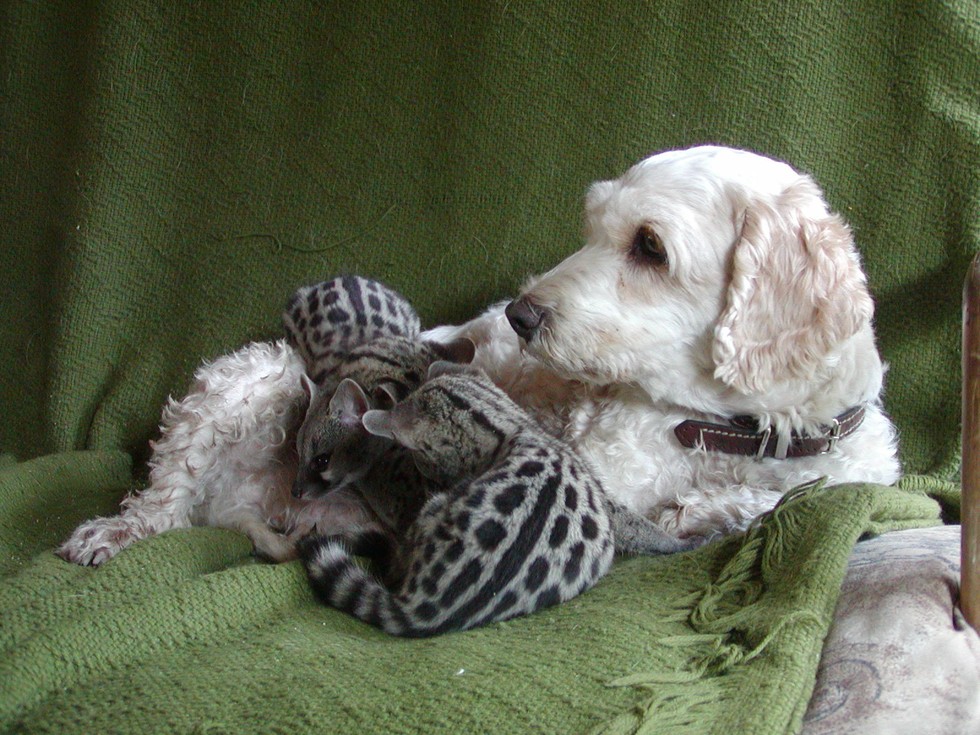 The baby genets, who they named Maswika, Sakka and Chouchou, continued to drink Candy’s milk, as well as milk with added calcium from the syringes. Candy became very protective of the babies, and the four of them grew inseparable. 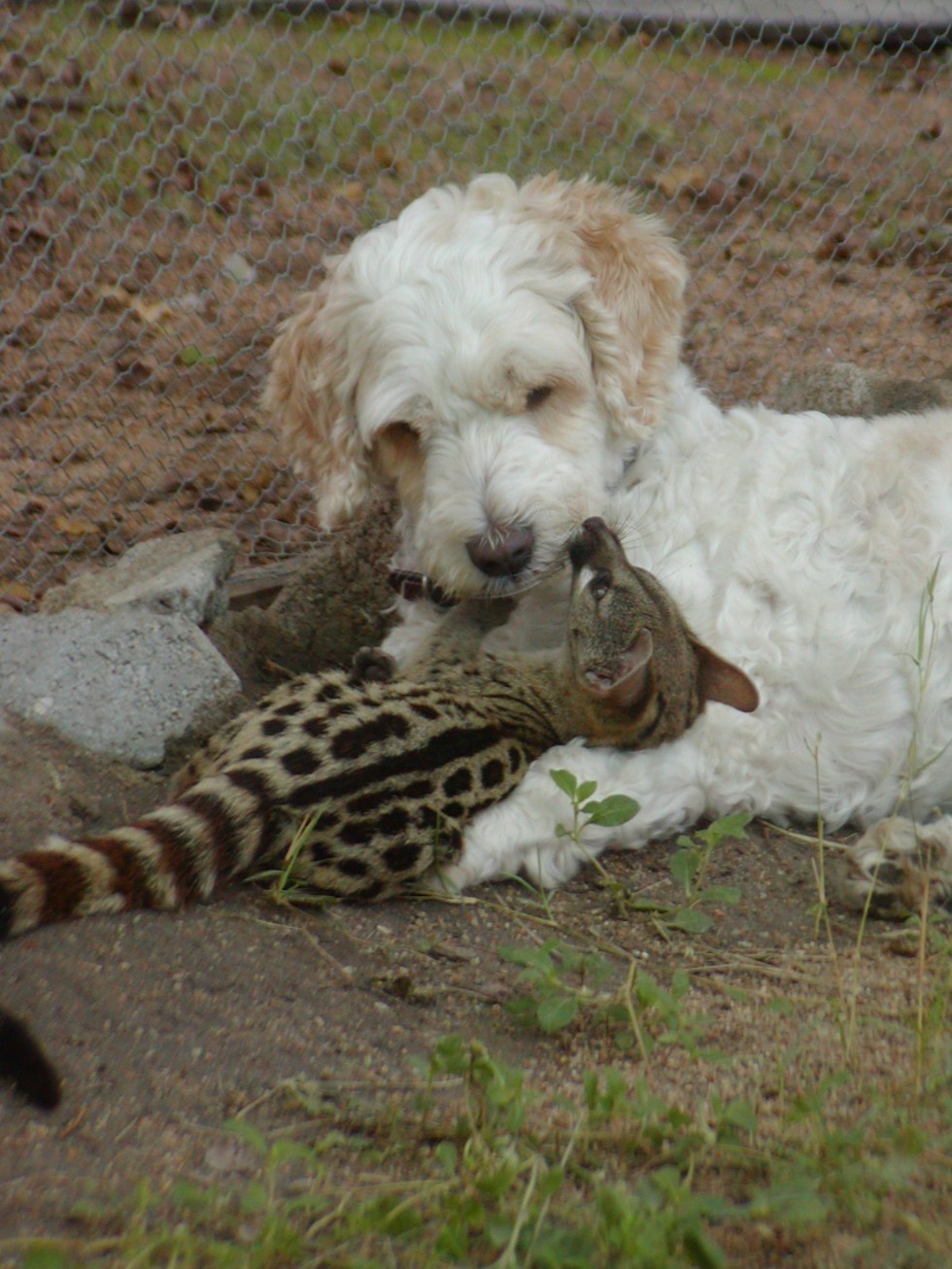 Thanks to Candy, the genets grew up healthy and strong, and two of them, Maswika and Sakka, were released back into the wild. Chouchou, on the other hand, was too anxious during release, so they kept her at the orphanage. 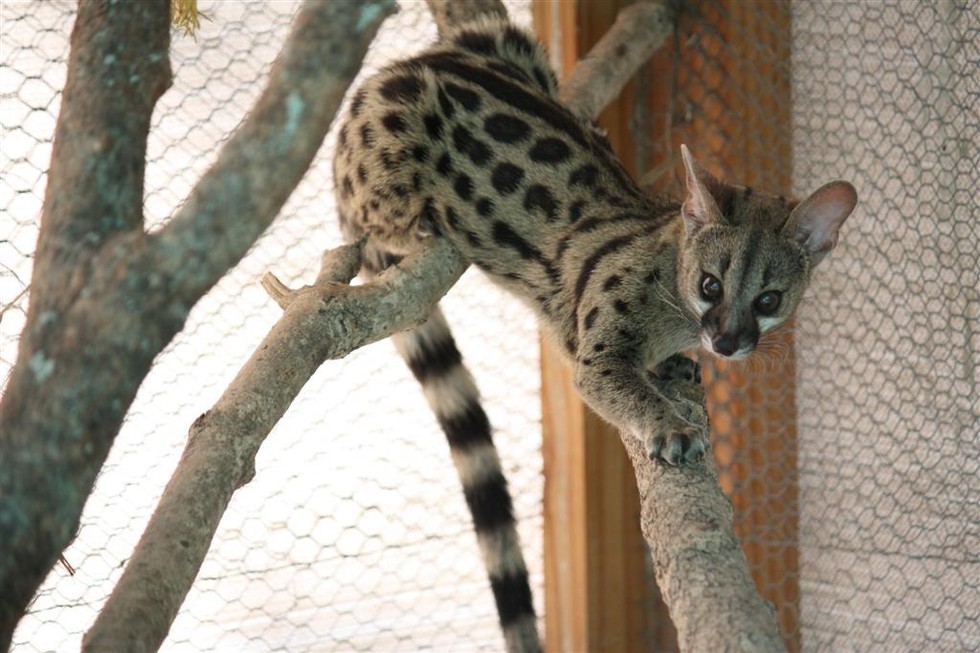 Since Chouchou is nocturnal, her and Candy don’t get to spend much time together anymore, but the time they do spend together is spent loving and cuddling with each other. Chouchou may be much bigger and all grown up now, but Candy still has so much love to give.