“Kind Of A Jerk,” Cat Gets Called Out After Running Away

After her cat Babou went missing on June 9, Mary Irwin decided to put her on blast.

“She’s mostly friendly but may run if you try to catch her—she’s kind of a jerk, too,” Irwin’s flyer read. “She has strong opinions about things.”

Juxtaposed next to pictures of cute but judgmental Babou, the flyer gained a little initial attention in Irwin’s neighborhood before it was shared all over social media.

“I live in a big apartment complex and my guess is someone found her and took her in,” Irwin told the Charlotte Observer. “But Babou is not the kind of cat people would keep. I assume whoever found her wants to get rid of her. She is the weirdest cat ever.”

Irwin’s distaste for some of Babou’s more annoying habits may lead anyone to wonder: who really wants this cat?

“She likes to sit on you but doesn’t want you to touch her,” Irwin continued. “She likes to sleep on your head, and she’s a talker. She has opinions about things and is very verbal. She will sit next to you, stare you in the face, and start a conversation that is a bit uppity.”

Irwin first found Babou in 2011, alone in a Miami Target parking lot. She and her husband, Don West, thought they might take their newfound furry friend to a shelter, but Babou soon grew on them and joined the family.

“I had hurt my neck, and my husband went into Target to get some medication for me, and I said, ‘Oh, God, we can’t leave her here or she’ll get run over,'” Irwin told ABC News. “She ran across the parking lot and jumped into my arms. She was the coolest cat for six months and then she got spayed and that changed everything.” 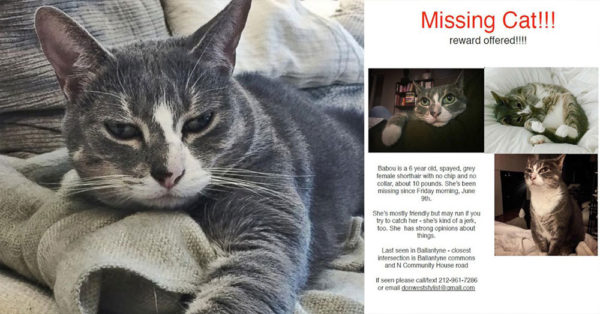 Irwin and West both work in the fashion industry. They had moved from Miami to Manhattan, and then to North Carolina, when the manx with moxie decided to strike out on her own.

“It’s going to be like the Sharks and the Jets, and she’s going to be leading this team of wild cats,” Irwin said. “She’ll show up in two weeks missing an ear and patches of hair and smoking a cigarette all like, ‘You should see the other guy. I’d tell you where he is, but then I’d have to kill you.'”

But Babou’s return didn’t end up as graphic as Irwin’s rendition of West Side Story would have many believe. Babou made it back home on Tuesday, June 13, during a thunderous storm.

As Babou settles back into her old habits, actor Tom Hardy is mourning the loss of his long time friend, a dog named “Woody.” Click the button below to read more.