Kittens are curious and often times find themselves in dangerous situations, so maybe that is why cats supposedly have nine lives.

A woman on vacation was walking her Standard Poodle when all of a sudden he started to head towards one of the cars parked on the side of the road. Then she heard a cat meowing and thought at first it was someone’s ringtone, but realized it was a tiny kitten that was hiding under the hood of a car. 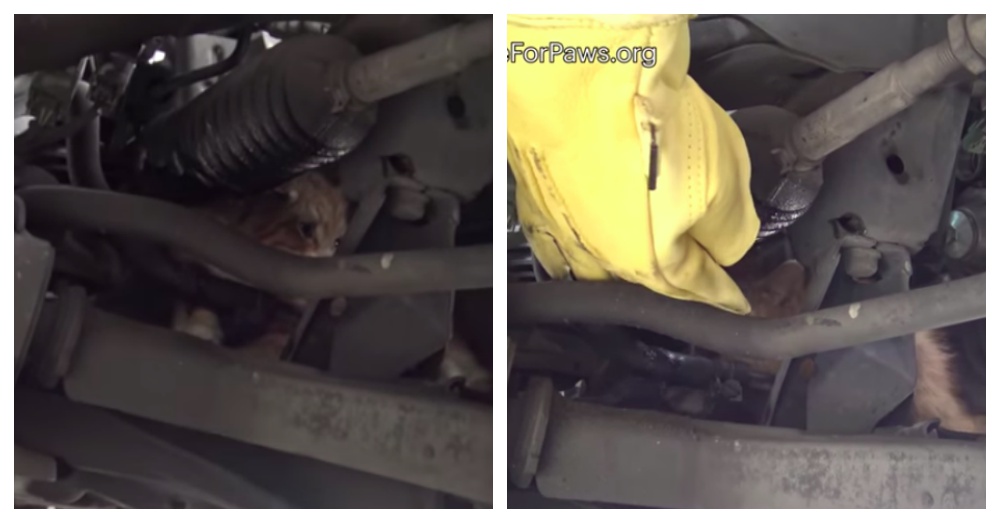 She immediately called Hope For Paws for help in rescuing the little fur ball. The kitten hissed and batted at anyone that tried to get close. He managed to wedge himself next to the engine and just behind the wheel of the car. When Eldad arrived he tried to show the kitten that he was there to help and was not afraid of him. 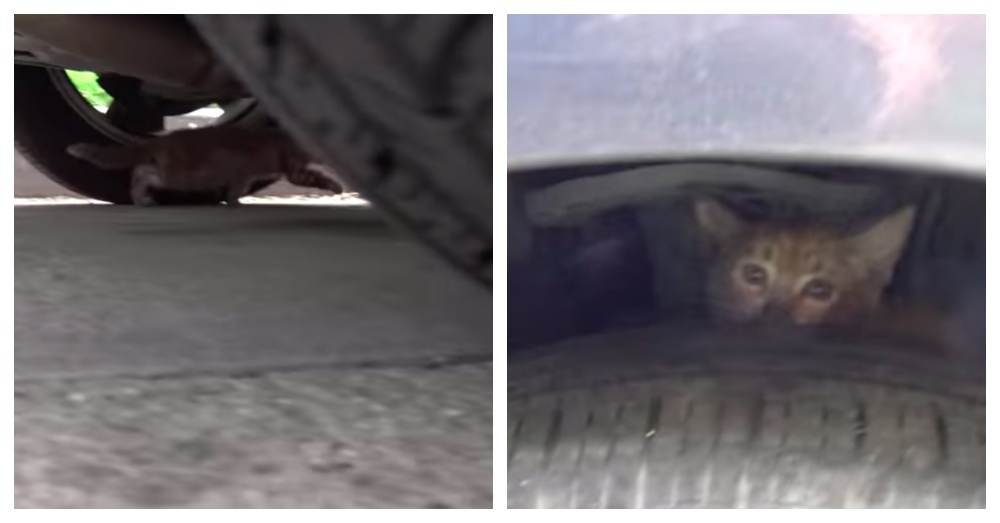 After a few attempts at reaching the kitten, Eldad decided to block off the car with a gate in case the kitten jumped down. However, the gate was not large enough to completely enclose the car and the kitten managed to escape. Eldad quickly looked under each car in front of and behind the one the kitten was first seen in.

Finally, he found the adorable kitten with his head popping up behind a wheel of a car. This time he managed to surround the car with a gate, with the help of neighbors. He thought he would try a different method of coaxing out the frightened kitten. He played the sound of cats crying and meowing on his phone and placed a net below the kitten. 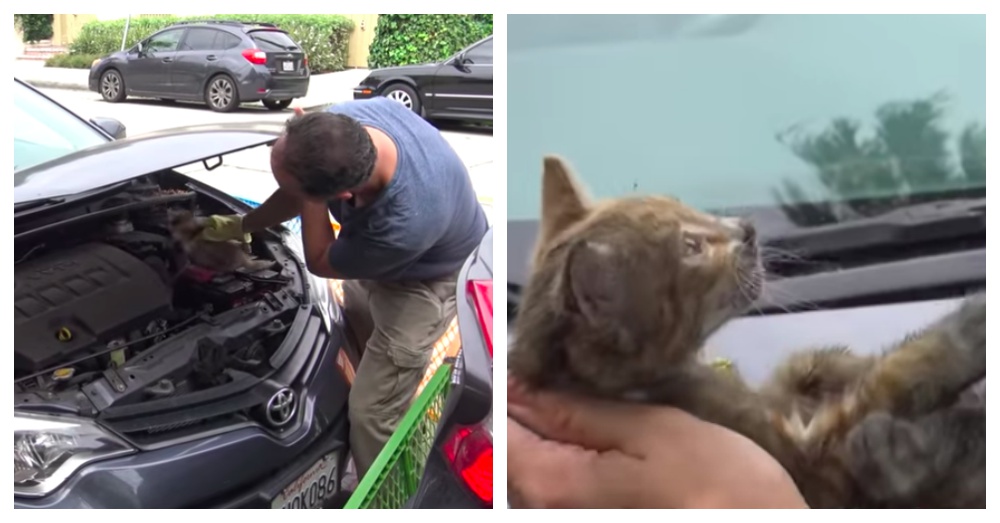 The little guy responded by meowing back but did not fall for the trap. Meanwhile, neighbors knocked on doors to find the owner of the vehicle. They were able to find the owner who unlocked the car and popped the hood. The kitten was perched on top and Eldad quickly grabbed him. 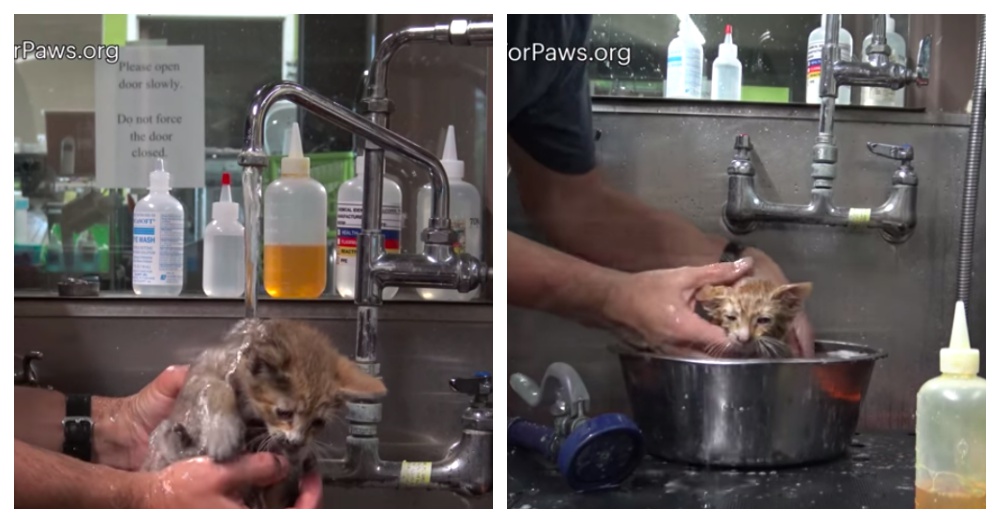 The adorable kitten was covered in grease but appeared to be healthy. He was transported in a crate and given a warm bath to remove all the grease. Eldad named him Axle and the kitten started to warm up to him. After his bath, he started to purr and rub against his rescuer’s face. 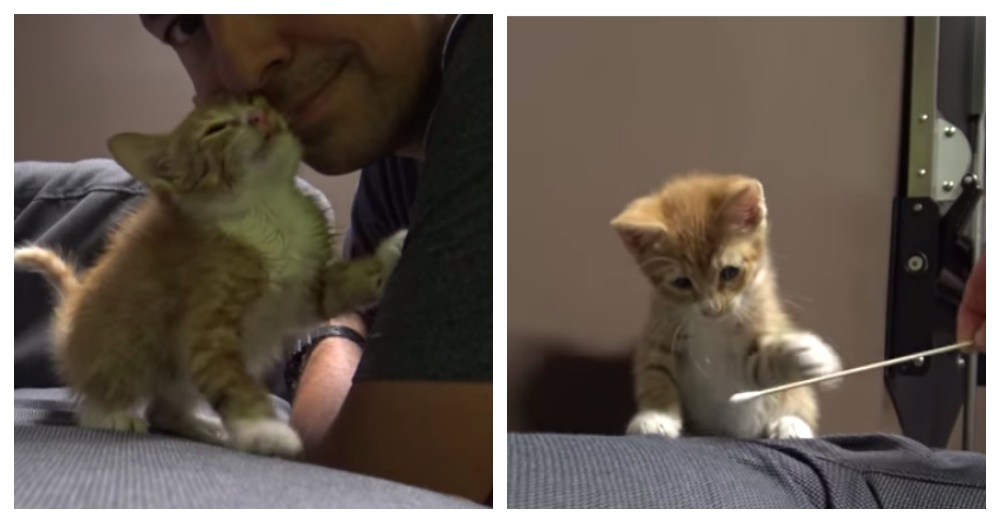 This curious and exuberant kitten is available for adoption at Cat Connection Los Angeles. Thank you to everyone involved in saving his life. Remember to check under your hood for kittens that like to hide in dangerous spots.

Watch the intense rescue in the video below and don’t forget to share.