It’s This Baby Horse’s First Day Outside, But Keep Your Eye On The Horse Behind The Fence

Horses are beautiful, smart, strong, and hardworking. They’re also easily-trained, sensitive, and responsive to humans, which makes them excellent companion animals for humans.

Likewise, Scott and Jackie Nelson enjoyed a very special bond with one of their horses, Poka. As owners of Florida’s Down Under Color Ranch, Nelson care for a range of Australian and American painted horses, but there was something special about the pregnant mare. 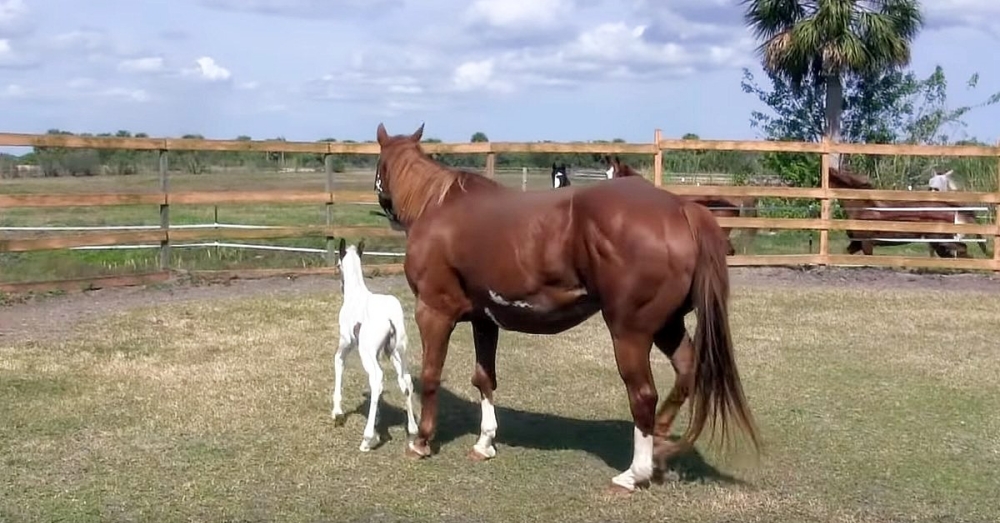 When Poka finally went into labor, the rest of the farm predicted Poka’s offspring would be special. The baby’s father, Chief, also an incredible horse, so Junior’s enviable lineage seemed to predict a strong and healthy foal.

When the baby finally arrived, the Nelsons realized that Coconut was more than just a healthy baby. She was also a “Medicine Hat” horse, or almost entirely white with a “bonnet-shaped” splash of color on the top of her head that resembled a tiny hat. Many people believe that these “Medicine Hat horses” possess the magical ability to protect their human riders during war.

Meanwhile Coconut’s YouTube debut has accumulated 3.6 million viewers. “Coconut stretching her legs to an audience!” the Nelson’s wrote in the video of the 2-day-old horse’s debut to the rest of her herd, including her father.

“Coconut’s color pattern is called tovero, with a medicine cap,” the Nelson’s explained. “Coconut is also known as a WAR HORSE which these markings are extremely rare. Only the Chief or the Medicine Man rode this rare horse. They must have a shield on their chest and markings on their flanks which are also called shields and they can only have 1 blue eye with liner around the eye. This eye in Indian Mythology is called a Sky Eye.”

“If the Chief or Medicine Man dies in battle,” the video continues, “then this one blue sky eye will carry their spirits to their Gods. So that is why she is soooo special. Coconut is out of Poka (TREASURE MY DOT) and is by our stallion Chief (SONNYS MISTER TRUBAR), who is standing.”

Such rare markings will, unfortunately, also make Coconut a target for poachers and thieves, but the young foal will be closely guarded at the family ranch.

“What a beautiful foal and she is such a good Mommy, the way she runs interference for the foal when it runs toward the fence,” one user commented on the video. “The foal’s markings are so pretty with her brown ears and spots.”