Apollo hasn’t exactly led a charmed life, but this pit bull’s luck seems to be improving.

Found homeless in Washington, Apollo was taken in by an animal shelter in Tukwila. He languished there for more than half a year as human after human passed him by for more promising pets.

Time was running out, and the shelter couldn’t hold onto the energetic American Staffordshire much longer. According to the Dodo, Apollo was scheduled to be euthanized when a staff member from the shelter made one final call to possibly place this pup’s future in safe hands. 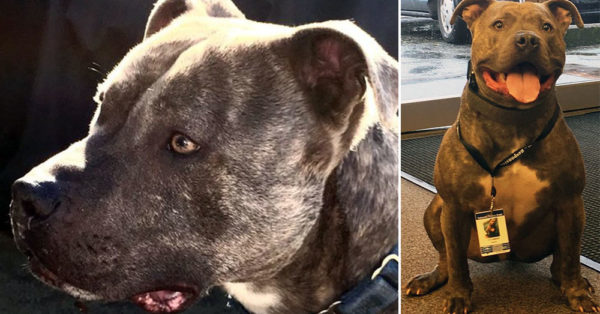 The K-9 squad of the Tukwila Police Department obliged and took on Apollo, and they have trained him up to be a vital member of their law enforcement team. And while the transformation from rookie to first responder was another challenge for Apollo, he’s since proven his worth.

“No one would give him a chance simply because he was a pit bull who often have bad reputations based on misconceptions and lack of training,” the Tukwila Police Department posted on Facebook. “We decided to give Apollo that chance and we are glad that we did. Apollo finished narcotics school in November of last year and did indeed finish first in his class.”

Apollo now has a loving home, stable employment, and the respect of his fellow officers. More than a lot of humans can claim!

“He has brought great joy to all of us at the department in addition to being a very productive and hard worker,” the TPB posted. “He is now a part of his handler’s personal family and the family of the Tukwila Police Department.”

GreaterGood has a new way to help dogs in shelters across the US—care packages! You can provide healthy meals, warm beds, and the proper vaccines to dogs with a care package.
When you sponsor a care package, we will transport nutritious, high-quality dog food, beds, and vaccinations to shelters and rescue groups nationwide!
Make a difference!