Hurricane Harvey has displaced millions, caused untold damages, and left a path of waterlogged destruction in its wake.

Some have decided it’s the right time to give to charity, while others have rushed headlong into the danger, hoping to help. There’s no doubt that the flooding has made life harder for those still holding strong in the American southeast, but perhaps no one is more rankled than the feline recently photographed on August 30, fording floodwaters in Houston.

His furrowed brow says everything Houstonians have been thinking for days, and, thanks to Getty photographer Scott Olson, it has been shared more than 65,000 times, KSAT reports.

The cat was seemingly giving Olson a snide look. Possibly in frustration over the storm. 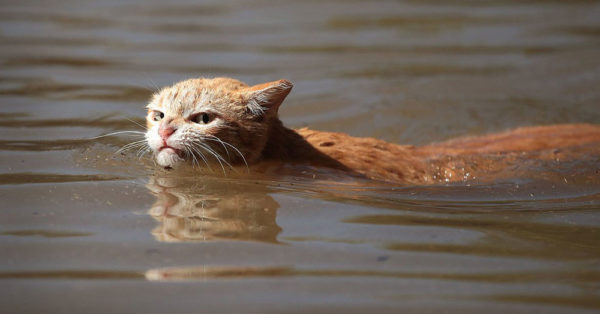 “All the photos I’ve seen of dogs and horses escaping the flooding, they look terrified. This cat just looks pissed — like he’s going to write a sternly worded letter to his city councilor when he gets home,” Laura Mullane posted to Facebook, along with the picture of Tex.

If you haven’t seen a meme of this cantankerous cat yet, don’t worry. Tex isn’t waiting for anyone or anything. You’ll find him when he wants to be found. Now, get off his wet lawn.

"Climate change is a hoax." pic.twitter.com/t66UshzUOe

Proving Texans maintain their mettle even under a few feet of water.

And seeking vengeance on the humans that wrought this soggy state of affairs.

You tried to push me to the coffin, now I'm here to make you suffer. No mercy for humans. pic.twitter.com/1iSzIqMx7l

Harvey later made it to the dry hood of a car. Olson was quick to capture the shot again, though not without causing many to wonder—did he rescue the cat? 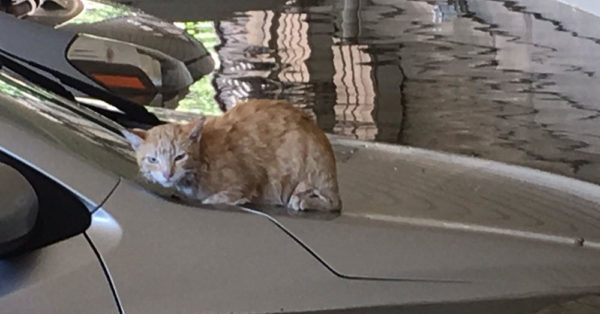 Along with many others, we hope Tex is safe and sound somewhere in the Houston area. 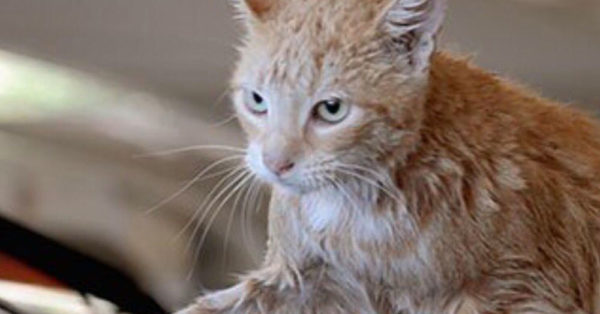 The number of pets and people forced out of their homes by Hurricane Harvey has been staggering. There is much work to be done to restore those who have been displaced by the storm. To learn more about how you can help the animals affected by the storm, click the link below!

Hurricane Harvey has wreaked havoc, and we’re working fast to save over 1,000 pets from the devastating floods. With your help today, we’ll be making multiple flights from San Antonio, Texas, urgently needed to carry loving, healthy pets to shelters in the Pacific Northwest to be adopted into their forever homes, to make room for owned pets that desperately need shelter from Hurricane Harvey.
This operation will be ongoing, as there are 1000s of pets that need our help! You can help, too!
Make a difference!