Meet The Veterinarian Who Rescues Animals From War-Torn Gaza, Iraq, Darfur, and Bosnia

Dr. Amir Khalil is right at home in some of the most dangerous places in the world.

For more than two decades, the Egyptian-born veterinarian has rescued lions, wolves, baboons, rare birds and other animals from conflict zones in the Gaza Strip, Iraq, Sudan’s Darfur region, and Bosnia. He takes them from struggling zoos, some where animals are even being sold to pay for food, escorts them through heavily armed checkpoints, and brings them them to sanctuaries where they can live out the rest of their lives in comfort.

The 54-year-old works with the Vienna-based charity, Four Paws International, but the obstacles he faces are often uncharitable, to say the least.

It’s not uncommon for Khalil to find guns pointed at either himself or his vehicle. 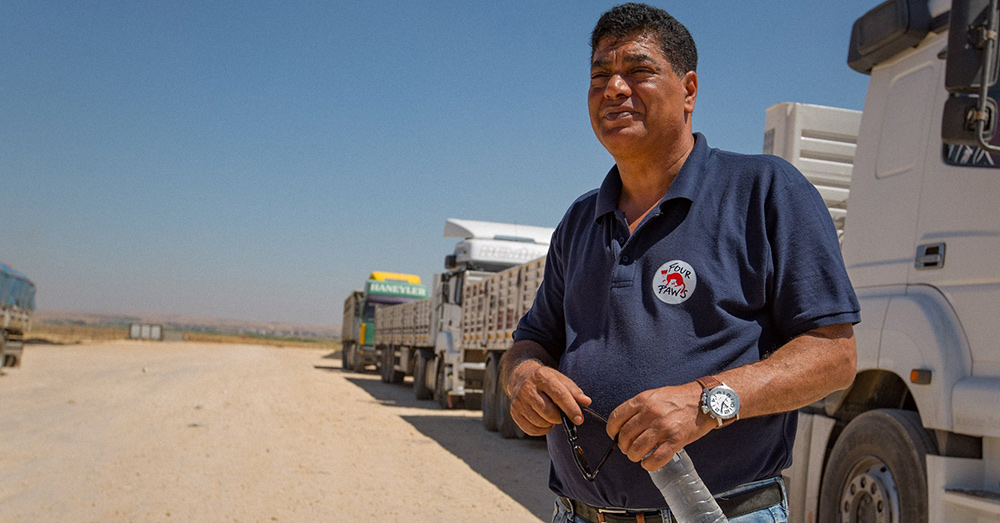 “We go to places where the logic doesn’t exist,” he told NPR. “The government doesn’t exist. No one cares. And where no one will believe you are coming to save animals. You see everyone escaping from a city like Mosul [Iraq], going out. Thousands and thousands. And you are the only car going the other way around. You are going inside.”

Khalil is called on to provide animals will medicine, vaccines, and food, desperately needed in areas where political conflict or economic stagnation have driven zoo administrators to their last resort. A zoo owner in the Palestinian city of Rafah, in Gaza, after bearing the death of four lion cubs who froze overnight, declawed a lioness in an attempt to subdue her, and draw more visitors. Khalil worked with authorities from Jordan, Israel and Hamas to set up a plan to shut down the zoo, rescue the animals, and take them to a sanctuary.

“We are happy to finally put an end to this horror,” he said in a statement in March. “For far too long, the animals of Rafah zoo have had to live under unimaginably dreadful conditions. Evacuating more than 40 animals in just a few days will be a logistical, mental and physical feat — it is our biggest rescue mission to date.” 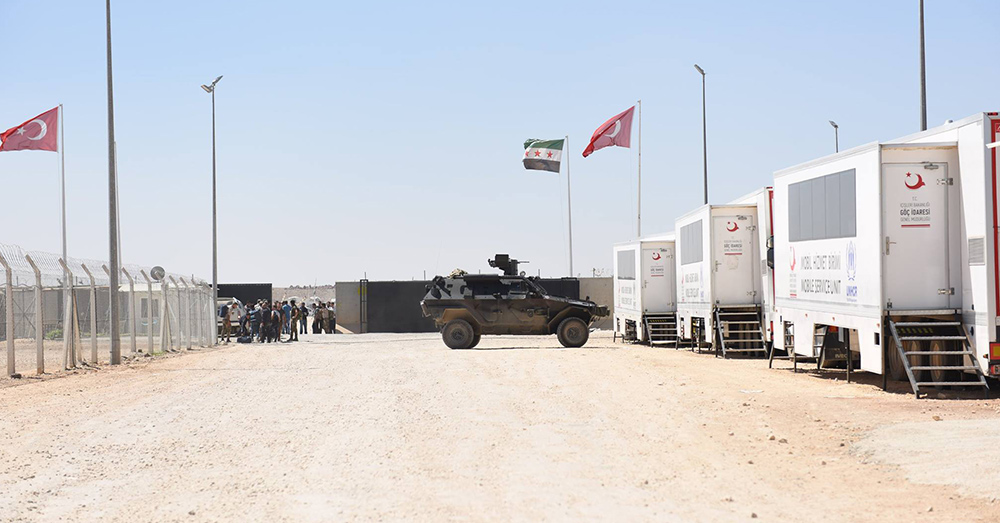 According to NPR, the rescue would involve 47 animals taken from the struggling zoo. Khalil planned to bring several trucks, cross the border from Israel into Gaza, load them up, and leave

But, he was blocked.

Israeli soldiers barred Khalil and any others from entering Gaza. A blockade put in place by Israel and Egypt has effected a war of attrition on the Palestinian economy for 12 years, ever since Hamas took control of Gaza in 2007. Thousands of civilians have died trying to escape, a vast majority of the humans in the region have been forced into poverty, and the animals have been all but ignored.

The anniversary of the Great March of Return drew growing protests in spring 2019, prompting checkpoint agents to close off borders completely, locking Khalil out of Gaza for weeks. 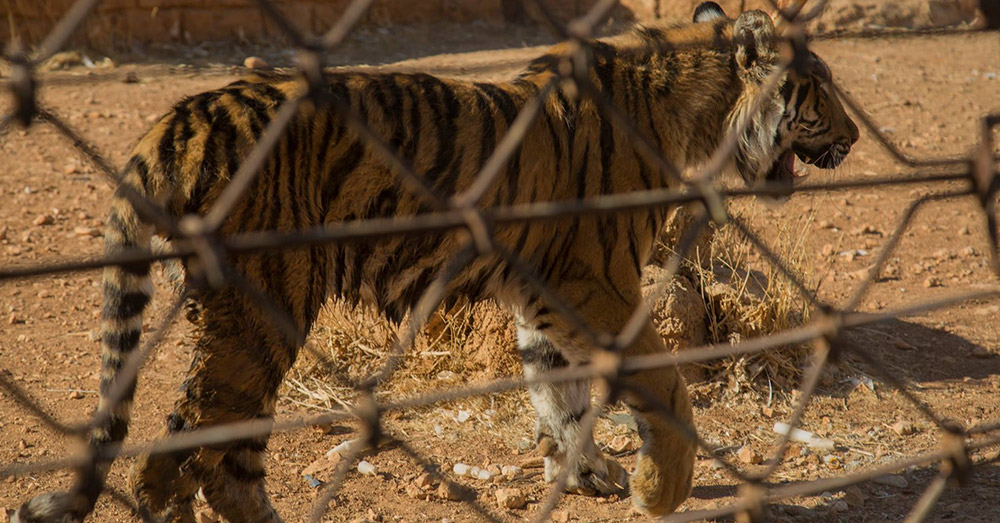 Source: Facebook/Four Paws International
Animals in dilapidated zoos may not survive if not for Khalil’s help.

Khalil was not swayed. He knew the animals deserved better. It was not their fight. The veterinarian returned to the border in April and offered an honest plea.

“I have to confirm I’m not really for any party, not for any political gain,” he told the soldiers at the Gaza border. “I’m just for animals.”

Khalil was given three days to evacuate the animals and return to Israel, else he would be locked out again. This time, on the wrong side of the fence.

Khalil and his team quickly made their way to the zoo where they found further complications. Hamas’ agriculture minister stood in the way of the animals being evacuated, contending that it reflected poorly on the region and its leadership. 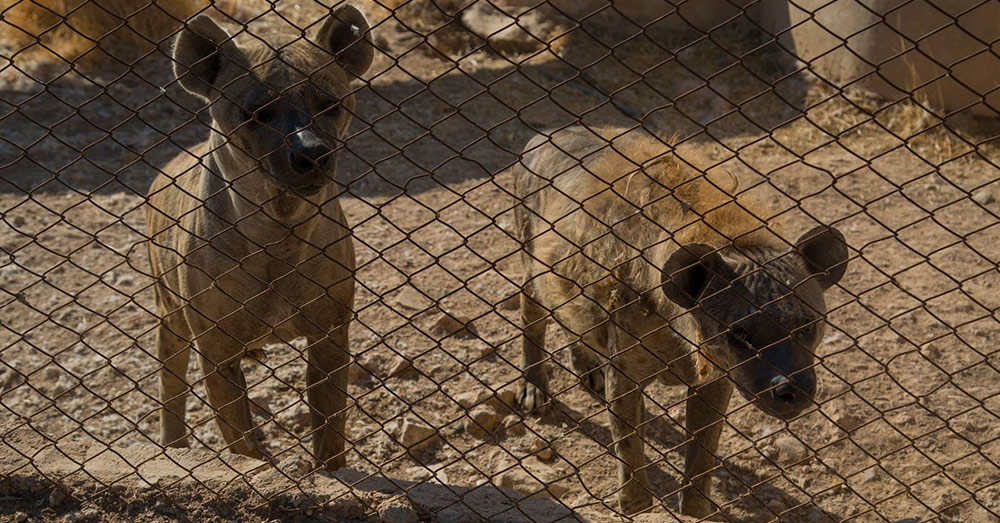 Source: Facebook/Four Paws International
In conflict zones, zoos may be underfunded, and the animals treated poorly.

“They told us… they would care for their animals, and they don’t need our help,” Khalil said.

The veterinarian knew better, however. Khalil could plainly see, the zoo was “no appropriate place to care for the animals.”

“I called the team and I said: ‘I cannot go back without the animals. I can bring the team back at first to a safe place outside Gaza,'” Khalil said. “But the team said, ‘We come into Gaza one, we come out one.'”

Khalil exhausted his options. He called every contact he knew in Hamas-run Gaza before learning a high-ranking Hamas official, Yahya Sinwar, would be visiting a nearby hotel the following morning.

It was the last day of Khalil’s 3-day pass. He waited for hours outside the hotel before Sinwar showed up. The Hamas agents that accompanied Sinwar chastised Khalil for thanking the Israeli army on Facebook after letting him cross the border.

But, they listened to his concerns.

“Hey, I’m not a journalist, I am a veterinary doctor and I have a problem,” Khalil told Sinwar. “Your people don’t let me out.”

Khalil spelled out his plan, highlighting the fact that letting animals free to sanctuaries where they can be cared for would paint Hamas in a much more favorable light.

They gave Khalil 12 hours to finish his mission, and leave. 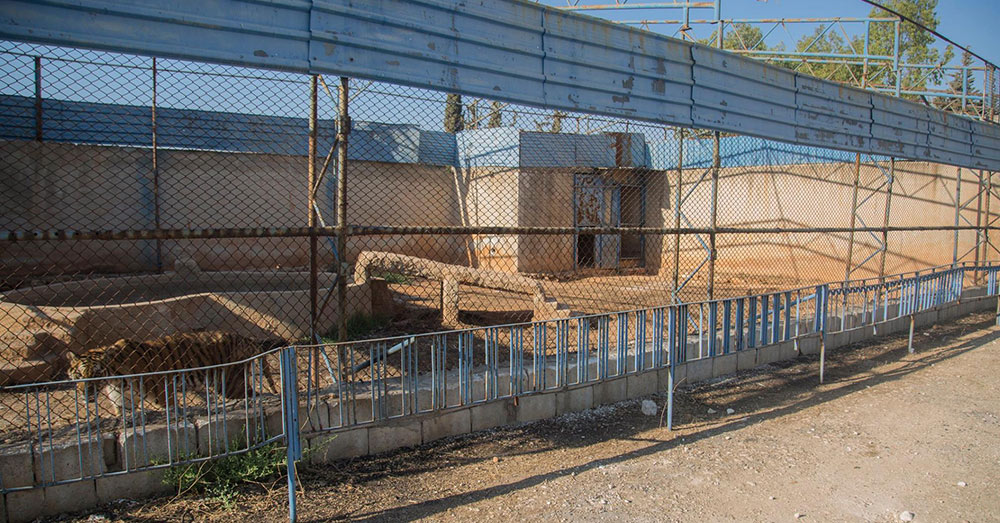 Source: Facebook/Four Paws International
Khalil has been rescuing animals from dangerous places for more than 20 years.

Locals crowded around Khalil and his team as they tranquilized the zoo animals and loaded them into trucks. Some even asked if they could be taken out of Gaza, as well.

Khalil and the animals crossed the border back into Israel before the deadline. Four Paws International is caring for each of the animals until they can be released into the wild, and some have been, already. As NPR reports, three porcupines, three pelicans, two foxes and an ostrich were recuperated and released in Jordan.

The declawed lioness, along with several other lions and baboons, are meanwhile living in various wildlife sanctuaries in Jordan and South Africa.

Conflict still rages on in Gaza, where Hamas officials have since asked Khalil to help build a wildlife sanctuary. It’s undoubtedly dangerous work, and Khalil still hasn’t decided if he will help or not, as there’s little guarantee the sanctuary will be sustainable given the often violent eruptions of political unrest.

Still, he knows the animals deserve better. It’s all he thinks about.