It was an animal rescue that is making headlines everywhere. New York City police were dispatched to a call about animal welfare and couldn’t believe what they discovered.

According to ABC7, authorities discovered a german shepherd and 21 puppies living inside a Mercedes SUV. Not only was the inside temperature of the car dangerously high, the car was filled with filth and feces. The owner of the car was reported as being a homeless veteran and living in the vehicle as well. Witnesses who knew the owner claim she was mentally unstable.

Several animal rescue groups quickly offered to take in the dogs. However, the dogs were divided up by two shelters: Adore-A-Bullie Paws and Claws animal shelter and Long Island’s Bobbi and the Strays. Fortunately, all of the dogs were given a clean bill of health. One did suffer some minor blood loss, but is expected to make a full recovery.

After a couple of days of recuperation, the dogs will become available for adoption and will be able to start new lives with their forever homes. 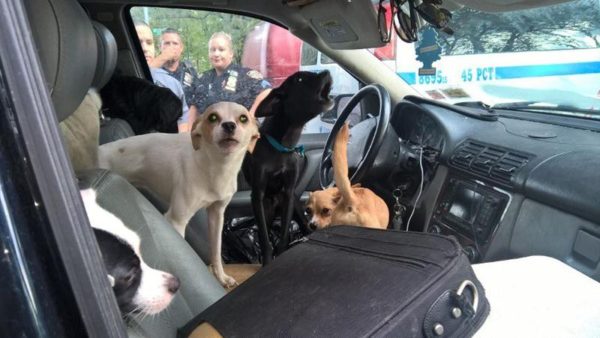 As for the 54-year-old owner, she was taken into custody for a mental evaluation. She was later sent to a facility for further treatment.