When Meena Kumar was nine months old, the infant was abandoned inside a basket at a college in Pune, India. She spent the following year living in an orphanage where she eventually was adopted by a couple who lived in Mumbai.

While Meena grew up in Mumbai, she took care of a little litter of puppies in her home. Eventually, Meena and her family made the move over to the US, settling down in San Jose, California. It was there that she started to make almost weekly trips to either the Humane Society or to Muttville Senior Dog Rescue. 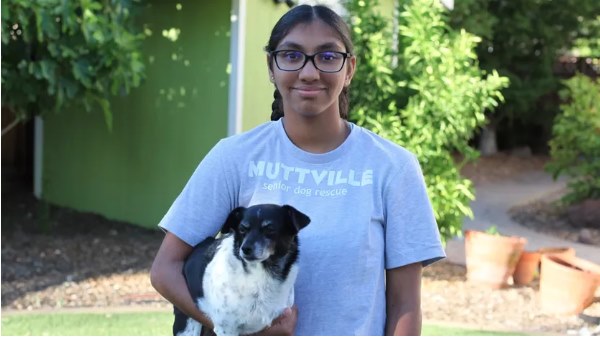 Muttville is a free-range dog rescue that specializes in caring for the elderly pups who need a “second chance at life,” as their website writes. The rescue has been run mainly by volunteers since its debut in 2016. And every year, they’ve rescued around 1,000 dogs!

Meena first learned about Muttville from a neighbor who’s pup was adopted from the rescue. As she learned more about the older dogs who are abandoned and overlooked in animal shelters, she became inspired to do something to help.

As the young girl stated according to CNN, “More people should adopt senior dogs. They give you the same unconditional love as any other dog.”

“Zoe came into my life 3 years ago and we’ve been inseparable. She accompanied me in my psychotherapy practice and I’m convinced that she was therapeutic and comforting for my clients. During #COVID19, I’ve been even more appreciative of her quietly reassuring presence.” Patricia pic.twitter.com/XQIGjIXoC8

Given her start in life and knowing that second chances can make a world of difference to those who need them, Meena decided that she was going to help the elderly dogs find homes. While she was 12-years-old and unable to volunteer with Muttville – they had a policy of volunteers being 17 – she found a unique way to help.

The 12-year-old began to offer her dog-sitting services to friends and neighbors in her town – all with the aim of using the money she earned to put towards Muttville. Meena decided to start advertising her new enterprise on Nextdoor. She called her business Pet Fairy Services, and she wrote in her advertisement, “You are never too young to start a business.”

Meena started off by charging $35 a day for her services. After several years of hard work, Meena managed to raise $7,000 for Muttville. Intel, the company where her father works, managed to match her donation, bringing up the total to double! As Intel shared on its website, the company has a Volunteer Matching Program in order to encourage its employees to spend money, time, or labor on non-profits in order to give back the community.

After her big fundraiser, this incredible young girl has continued her work for Muttville so that she can help elderly dogs find their forever homes. She even hopes that this pandemic will encourage people looking for dogs to consider adopting an older dog.

She stated, “We need their love more than ever.”

Such true words coming from such a remarkable young girl. The dogs of Muttville are lucky to have someone like her on their side.